Skip to content
Trusted By Millions
Independent, Expert Android News You Can Trust, Since 2010
Publishing More Android Than Anyone Else
0
Today
42
This Week
225
This Month
2894
This Year
112957
All Time

Samsung, and really any modern smartphone or hardware manufacturer nowadays, has issues with keeping certain things a secret. One of those things is the specifications of their to-be-announced and still highly-rumored semi-annual flagship devices. The Galaxy Note 4 lived up to the rumors and surprised us with an Edge version, which features an angled, curved display on the right edge to give the user some extra functionality and free up the phone’s main display. Now, with the Galaxy S6, which we just got a big leak regarding, has a set of rumors attached, and have since the day after the Note 4’s announcement at IFA in Berlin a few months ago. Let’s cover the rumors, but start out with the leak.

The leak is AnTuTu. Not the app or test, but the results for a device labeled the SM-G925F. Yeah, now we have at least an in-testing version of what could be, based on sequential device model numbers, a European model of a Galaxy S6. How these make it online is beyond me, but who cares when you know what you are about to. First, the screen of the hypothetical S6: QuadHD, spread across 5.5 inches. That’s gorgeous and only slightly smaller than the Galaxy Note 4, which will result in a slightly higher pixel density. Crisper images and a likely smaller frame: good to hear.

Next up is the camera realm. Well, we know that both photographers and selfie-nuts exist and buy at least some of Samsung’s devices, so this will come as little surprise. The front-facing camera is apparently at 5 megapixels, making for a great-resolution shot of you, your friends, and your best silly expression(s). The back camera, however, is a more drastic and meaningful improvement and increase. It comes in at 20 megapixels, which likely means that it will be using one of Sony’s camera sensors, which have graced Sony’s Xperia line of devices for years. 20 megapixels compounded with Samsung’s AMOLED display (which will likely be QuadHD, as we said), and the Korean company’s great HDR processing will make for killer photographs on this hypothetical device.

Next up is the operating system, and this is the most underwhelming part. The device that was tested has Lollipop, Android 5.0, running on it, so the Android Runtime (ART) will help the speed of the animations, as well as this being the initial software on the phone will help keep the device smooth for the first six months. This is just great news, since Samsung will get to show off native Touchwiz-pop in its announcement presentation this spring.

Now comes the fun part, especially for anyone that knows Samsung and its Exynos line of processors.  Yeah, since it’s European in existence, as it sits right now, it will feature an Exynos processor, meaning Samsung gets to show off proudly with this phone. The processor according to AnTuTu’s readout is an Exynos 7420. Familiar with the naming and model number? Well, we are and will gladly explain. The Exynos 7 is the latest generation of Samsung chips, and it features two huge improvements over Samsung’s Exynos 5 line. First, it has a 64-bit architecture, so it will be future-ready. And secondly, it features, as we saw in the international Galaxy Alpha, simultaneous multi-processing, which is fancy-talk for ‘use all eight cores at the same time’. A true octa-core performance machine, with this one ranging from 400 Mhz (0.4 Ghz) up to 1800 Mhz (1.8 Ghz), so it’s humble but capable. The Exynos 7420 is a great looking chip on paper, so it should not come close to disappointing if it does in fact come in the hypothetical Galaxy S6.

Now, the last few bits are also from AnTuTu, but less fun to hear. The SM-G925F has a 32 GB internal storage capacity, as well as a greatly appreciated 3 GB of RAM to back up the 64-bit 7420 processor and all eight of its cores. It’ll be great to have a 64-bit device meant for consumers with enough RAM to help out the coming stream of 64-bit-compatible apps and things in Android’s future and marketplace.

With all of that in mind, what do you think? Might the device be enough to make people drop their hope for a HTC device that won’t be an ‘M’ device, and disregard the metal-love, because it will likely have the Note 4’s aluminium frame and chassis? I certainly see the potential for a great device, as well as a huge competition flag to set at the beginning of another great year for Android devices. Would you pick this up if it also got a variant for LTE markets using Qualcomm’s Snapdragon 810 and the next Adreno GPU? Would you consider it if there was in fact the rumored ‘Galaxy S6 Edge’ sister device at launch or even a few weeks after? Think this device will get Samsung some of its prestige and popularity back? Let us know down below. 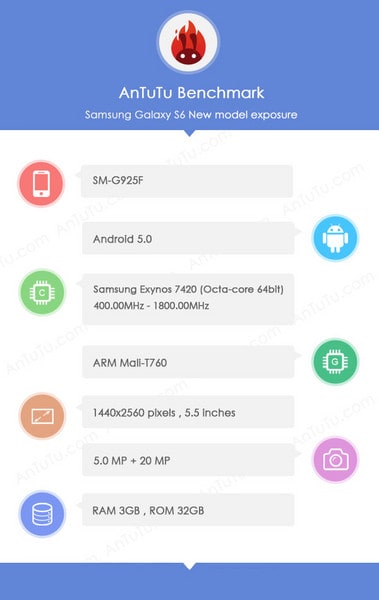