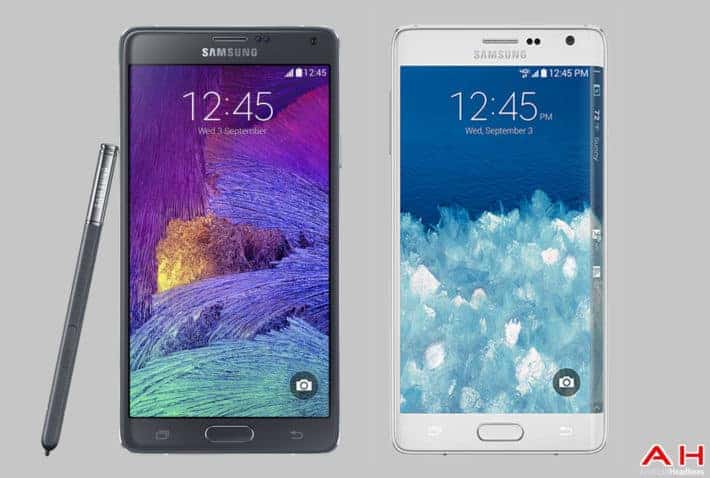 Both devices are not only made by Samsung, both devices are even named the Galaxy Note – one with a '4' to designate fourth generation and one that ends in 'Edge' depicting the curved edge on the main display.  Truth be told, except for the differences in the design of the display, these devices are identical, okay, the battery in the Note Edge is slightly smaller – 3220 versus 3000 – to give way for the slant or curve of the display.  The device size is ever so slightly different with the Note 4 being .2mm taller, 3.8mm narrower, .2mm thicker and 2 grams heavier than the Note Edge.  Yet, even with so much in common, these two devices each have their own, unique feel and purpose behind them.

Please take a look at the detailed specifications below and see just how similar these devices are to one another and after that we will explore each individual device, listing some pros and cons to see if we can determine a winner of this phone comparison. 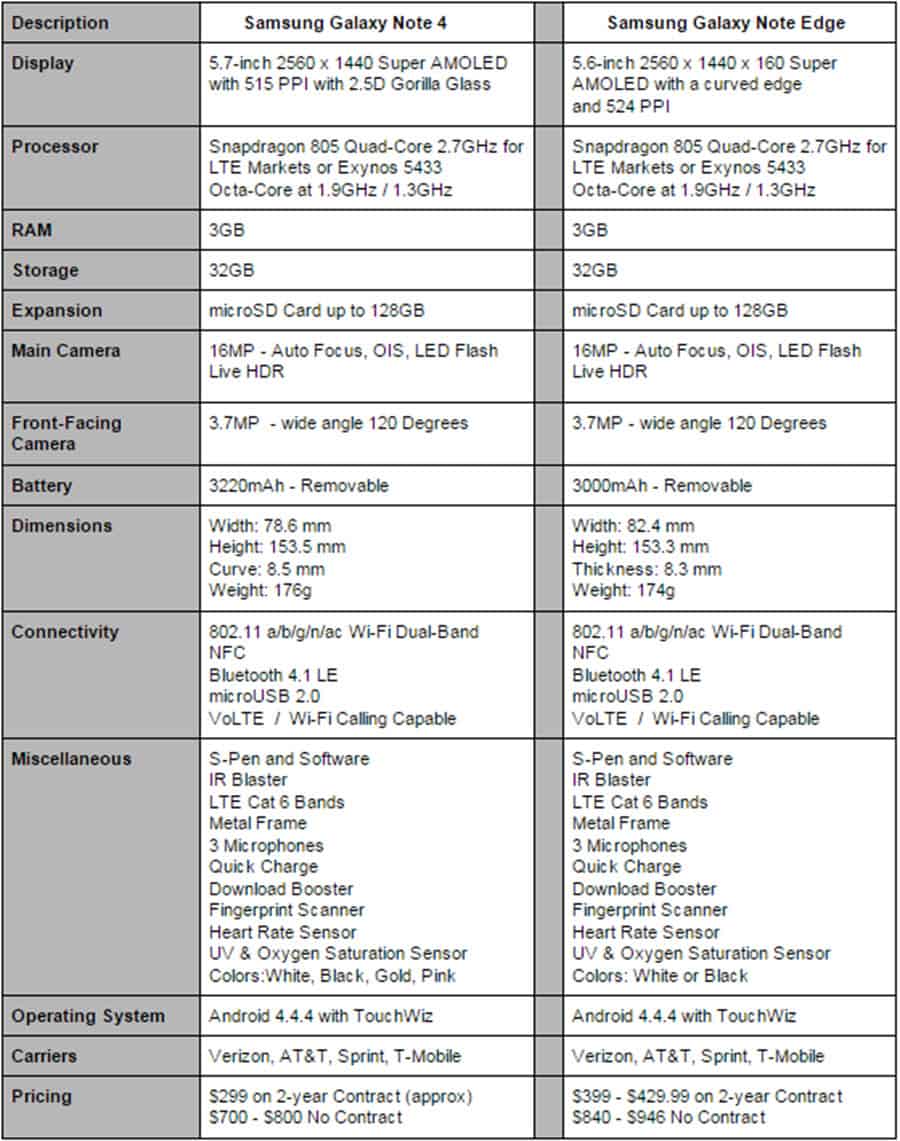 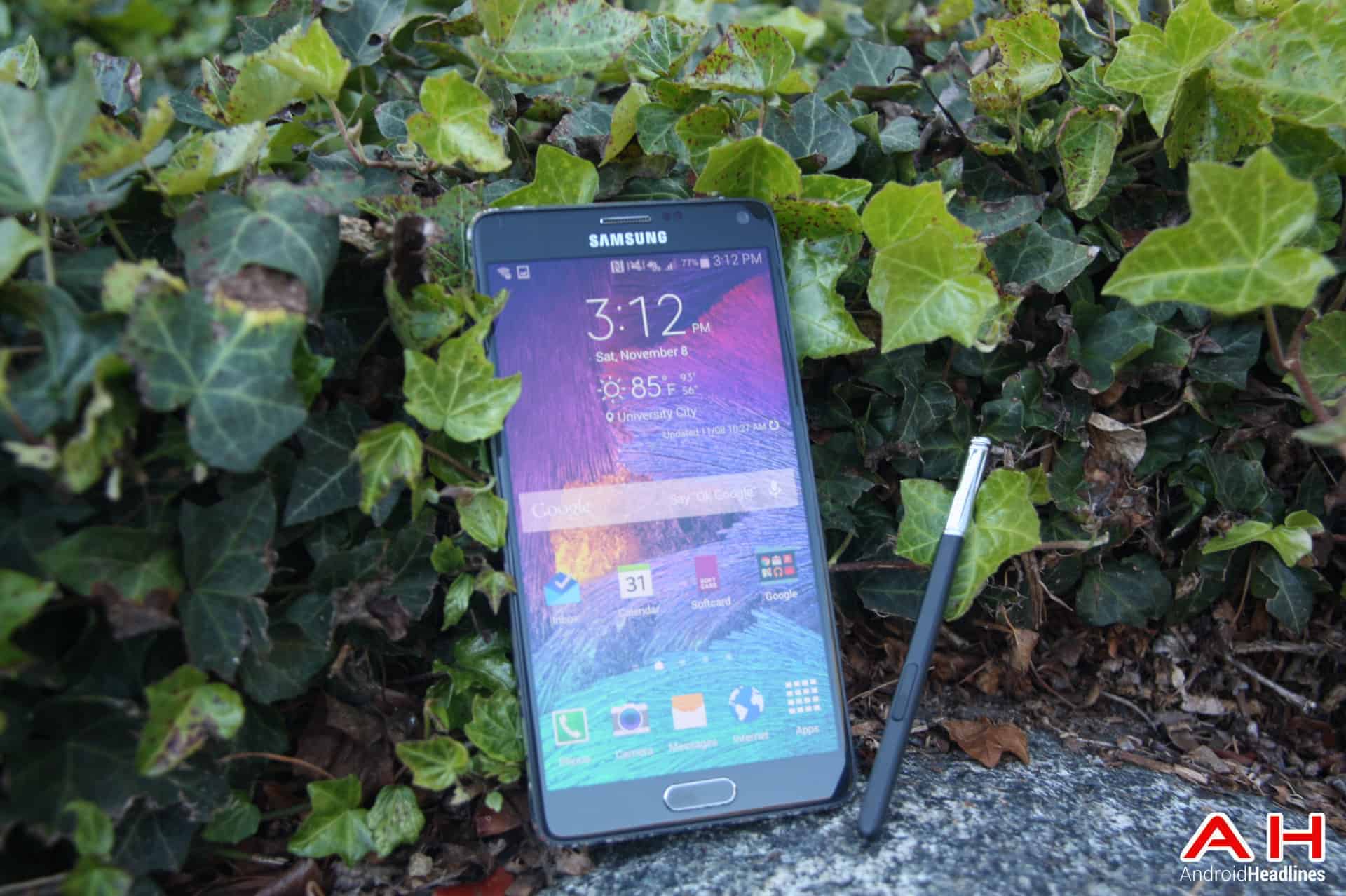 Samsung's Galaxy S5 fell far short in the sales figures that Samsung was hoping for, so they wanted to make sure they hit a home run with the Galaxy Note 4…and it appears that they have done exactly that.  The metal frame and trim – sculptured and adding that touch of elegance – and the faux leather backing, without the fake stitching, added to the looks and at the same time giving it a nice gripping surface.  Finally, Samsung was able to hit that form and function that customers were craving for…was it enough – it never is, but certainly a nice beginning.

Since the displays are really the main difference in these two devices we will discuss them a bit.  Actually, when I say the displays are "different," even they are more alike than different. The Galaxy Note 4's display is 5.7-inches and of the Super AMOLED variety, that has become a Samsung trademark.  It is a Quad HD (QHD) with a resolution of 2560 x 1440 pixels and 515 pixels-per-inch (PPI) and uses 2.5D Gorilla Glass 3 that has curved sides to make swiping from the edge smoother.  DisplayMate Technologies tested the display and pronounced it the best they have ever seen…and of course this accolade also spills over to the Galaxy Note Edge's display as well.

When we talk about the Galaxy Note series, we must certainly mention the S-Pen or Stylus. Samsung was wise to build a 'silo' for this S-Pen from day one – it cannot be of much use if you forget to take it with you or if you leave it somewhere…this way there is no excuse not to use this great accessory.  This year, Samsung has dramatically increased the sensitivity of the pen to give it, as close as possible, the sensation of using a real pencil while writing on a piece of paper.  They have also given it 'mouse-like' qualities to click and drag and added even more functionality to interact with the Note 4 and its software.  It is what really sets the Note 4 apart from other phablets.

The Samsung Galaxy Note 4 can be purchased and used on all major U.S. carriers and will set you back $300 on a two-year contract and about $700 – $800 off-contract. 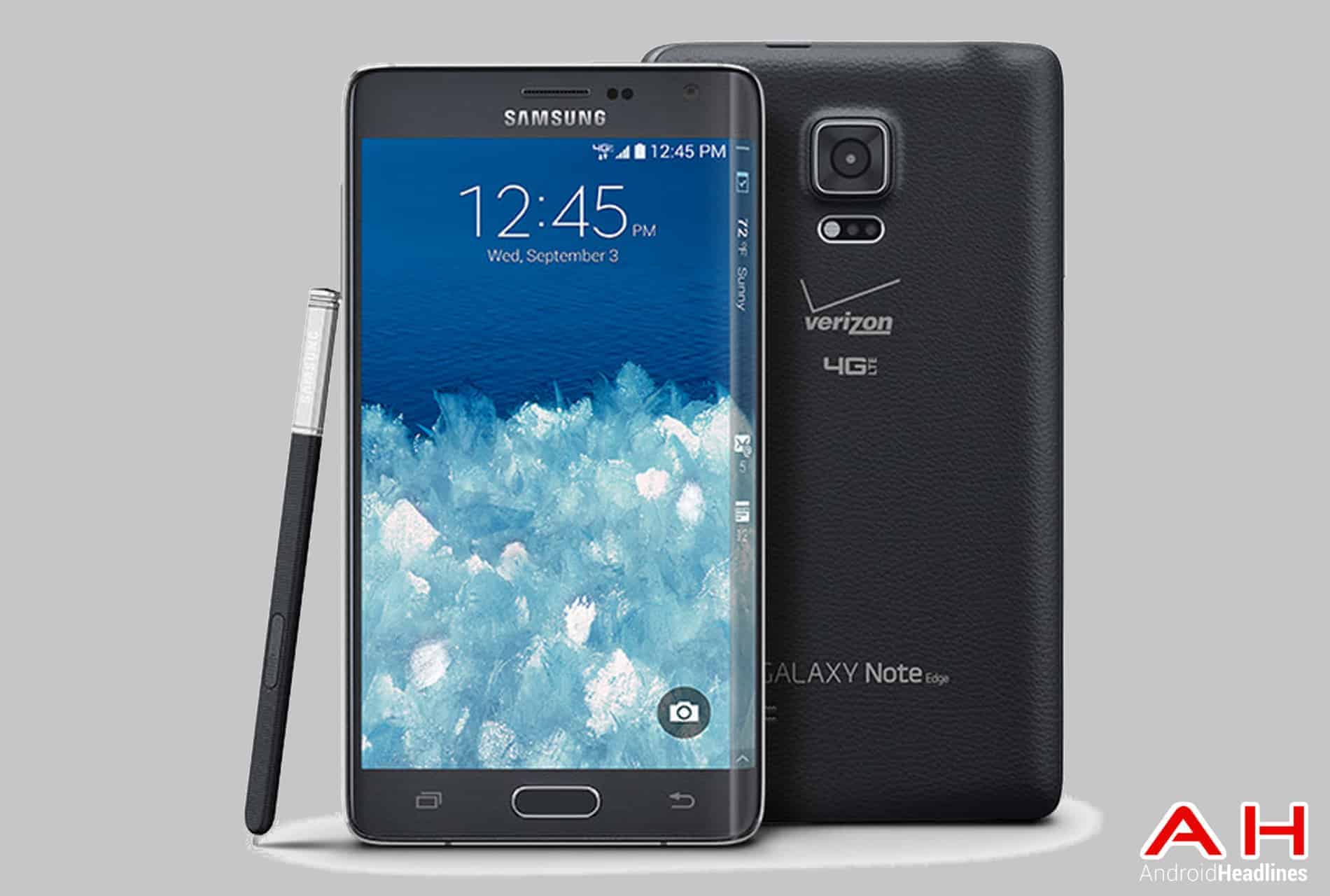 Samsung has been criticized of late for not being truly innovative any more – pushing out more software bloat and gimmicks, rather than concentrating on true innovations. The word 'innovation' is defined as the action or process of innovating – a new method, idea or product.  It changes or alters the way we do things and the Galaxy Note Edge certainly does that with its curved display, and while some will argue that it does not go far enough, it is certainly a few good steps in the right direction.

The display on the Galaxy Note Edge still uses Samsung's own Super AMOLED technology, only with a slight 'curve.'  The display measures 5.6-inches rather than the 5.-7-inches on the Note 4 to accommodate the drop or curve off to the right of the main display.  It is still a QHD resolution with 2560 x 1440 x 160 (the curve) giving the Galaxy Edge a slight boost to 524 PPI versus the 515 PPI on the Note 4.  Even though the curved edge operates independently of the main display, there is just ONE display under the curved Gorilla Glass 3.

What we are experiencing is done entirely through software that makes it look like an independent display.  That curved edge can be used for a variety of reasons and app developers will be able to designate it for whatever they want it to display.  Some people argue that it is just a gimmick and to them I say hogwash – one great example is its use with the camera.  Whenever you bring up the camera app, the entire 5.6-inch display is uncluttered with controls so that you can concentrate on the content of your photo, while all of the controls are across the side or the top on the curved edge out of the way.  It can also be used for notifications while the phone is sitting on your desk – simply glance over and see what the fuss is all about, rather than using your hands to check it out.  Does it cure cancer – hell no – but is it useful, fun and cool looking…you betcha!

Now, does all of this technology come with a price tag – you betcha.  The Galaxy Note Edge will cost you a cool $400 on contract and about $840 – $946 off contract, and only you can decide if it is worth the extra money. 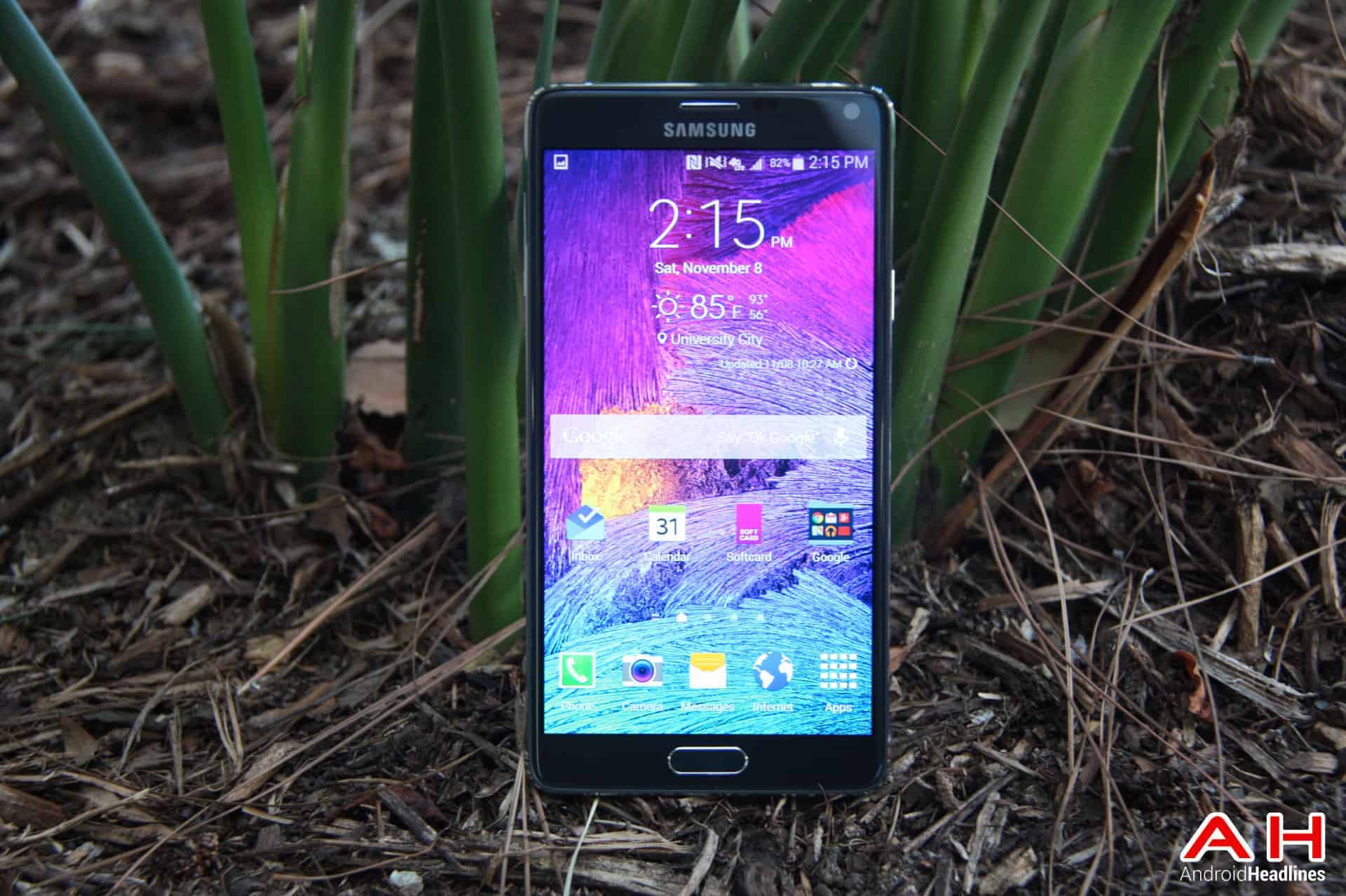 For this comparison I had to pick the Galaxy Note 4 as the overall winner.  Does that mean it is better than the Galaxy Note Edge, certainly not…in fact, if money were no object, I would buy the Note Edge in a heartbeat, but $400 on-contract is a lot of money any way you look at it.

The Galaxy Note 4 is a solid device that will handle anything you throw at it, it works for both right and left handed individuals and the apps are all ready to go.  With BOTH devices using the same of everything, it comes down to practicality and money. Lefties may find the curve on the right side of the display a little less convenient and while the developer's kit has been released, it may be a while before the curve really finds its true calling.  Then there is the question of the extra $100 – are you getting enough of the WOW factor or productivity from the Galaxy Note Edge to justify the extra money – only you can answer that.

Please hit us up on our Google+ Page and let us know what you think about these two devices and which one you would rather own and WHY…as always, we would love to hear from you.