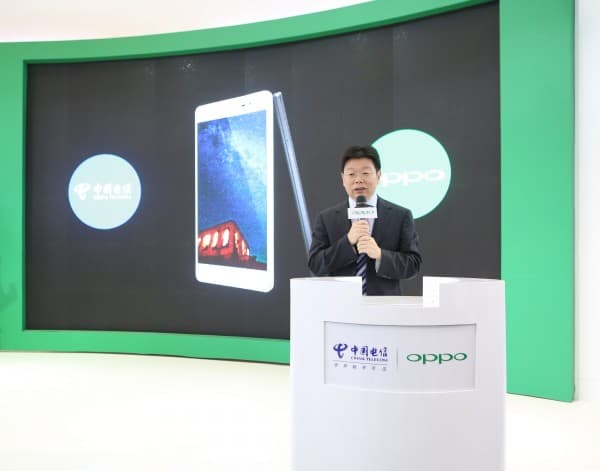 Oppo is making moves to break into the U.S. but they are also expanding into new areas in their home country of China as well. They announced a new partnership with China Telecom today that will allow Oppo to sell phones through the wireless carrier’s channels. The details are a little muddy because we’re working with information roughly translated from Chinese site cnBeta. It looks like high ranking executives from both companies sat down together and worked out a partnership that will result in Oppo phones being sold in China Telecom stores and through other channels where the mobile carrier distributes devices. Oppo’s Vice President Wu Qiang said at the meeting that they would also be releasing a new flagship phone and several new devices in 2015. Oppo Telecom has worked out strategic partnerships with China Mobile, China Unicom, and now China Telecom, all in the past two years or so.

Oppo released the R3 in September and they are planning to release two new phones on China Telecom next year. The Oppo R1C and the 3005 will be launched on China Telecom next year and may be exclusives for the Chinese mobile provider. The R1C is rumored to have a sapphire crystal back panel and a 5-inch display, and the 3005 is a mid-range device with a 4.7-inch display. Oppo expects to sell millions of units next year, partly because of this new partnership with China Telecom.

Oppo Electronics is a Chinese electronics manufacturer that makes mobile phones, mp3 players, LCD TVs, DVD and Blu-ray players, and other portable media devices. They started making cell phones in 2008 and now make lots of high-end devices that I would love to get my hands on. Oppo released the N1 in September of 2013 in partnership with Cyanogen, Inc. They released the flagship N3 to follow up the N1 just two months ago.

China Telecom is the third-largest mobile phone provider in mainland China. They also offer landline telephone service, Wi-Fi wireless broadband service, a mobile broadband service, and they maintain an online store in English for customers that speak English and will be traveling to China.