OnePlus have become big business this year. Both for themselves and secondly for the media. The Chinese startup did bring to the market a flagship killer device, but unfortunately, did not bring the device quietly. Instead, the company has managed to find themselves in the media on numerous occasions and not for anything to do with their device. Most owners (and reviewers) in general all do consider the OnePlus One to be an excellent device and especially when you factor into the equation the crazy (relative to similar spec options) cost of the device. As a result, the already announced successor, the OnePlus Two is quite a highly awaited device.

Since the OnePlus Two was announced we have seen a number of rumors and reports coming in as to what the device will be like, with some of them being outright out-there. For instance, only a couple of weeks ago, rumors suggested the OnePlus Two will come with two screens. All that aside, it seems the latest news is that a Chinese online retailer has suddenly started listing the OnePlus Two for preorder. Before you all rush over and start clicking ‘add to cart’ it is worth remembering that you need to be skeptical of such listings. That said, it does make for interesting reading. The image below is the image being used for the OnePlus Two and does remarkably look like the OnePlus One (with no secondary screen on the back as previously rumored). In terms of the specs, the retailer lists the OnePlus Two will come with a 5.5″ TPS Energy-efficient display with a 1920 x 1080 resolution. Inside the device comes with 3GB RAM and a Qualcomm Snapdragon 805 processor (clocking at 2.7GHz). In terms of cameras, the device comes with a 16MP rear camera along with a 5MP front shooter. Additional features include 2G, 3G, 4G and running on Color OS. It is worth remembering that the Chinese variant of the OnePlus One does come running on Color OS and as such no inferences should be made about the Cyanogen/OnePlus current situation.

Now, those specs don’t sound too convincing that this is the real deal, as they are pretty much the same as what comes running on the OnePlus One. The screen size, resolution and RAM are all the same. Although, both the rear camera and processor are both upgrades from what is currently available on the OnePlus One. Regardless of whether these specs (or the image) are accurate, the most interesting parts of the listing is that the device will ship on February 10th 2015 and the device is priced at just under $540. So could this be the actual release date and price for the latest OnePlus device? What do you think? 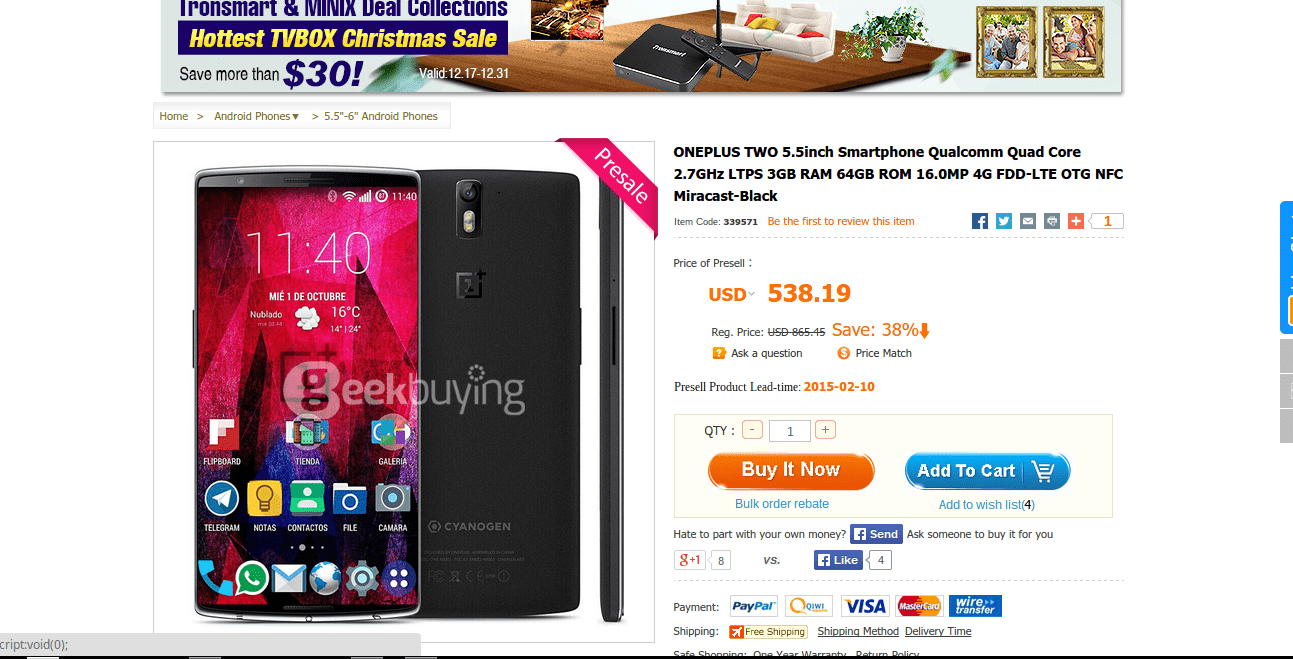