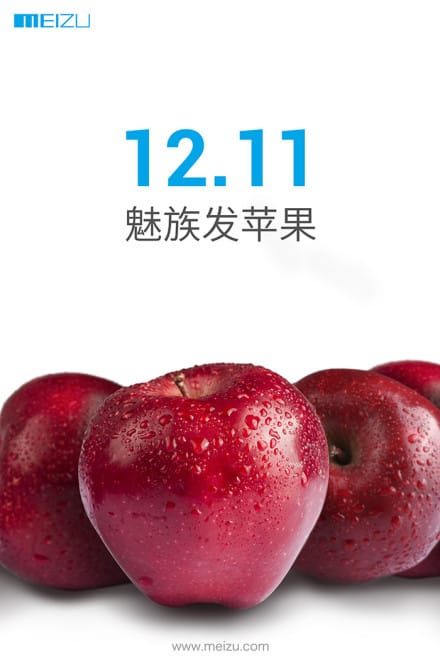 Meizu’s VP, Li Nan, held an interview with ZOL a couple of days ago and basically said Meizu will announce a new handset soon, mentioning the December 8th date, which is today. It seems like Meizu is playing hard to get with us considering they just released another teaser today, instead of the actual device. If you take a look above the article, you’ll notice the teaser image Meizu shared with the world. The December 11th date is mentioned and the company will hopefully unveil their handset on said date because another teaser would just annoy people even further. I really expected for the company to unveil the handset today, but it seems that won’t happen.

That said handset will allegedly cost only 799 Yuan ($130) according to the latest information that came our way and thanks to previously leaked GFXBench details, we also (probably) know the specifications of said device. Meizu K52 (just a codename) will feature a 4.6-inch 1080p display along with 2GB of RAM and 16GB of internal storage. This handset will be powered by MediaTek’s MT6752 64-bit octa-core processor clocked at 1.7GHz which comes with Mali T760 GPU for graphics processing. These are some really solid specs, especially if you consider the fact that this device will cost only 799 Yuan ($130).

Now, regarding the teaser image itself, I have no idea what is Meizu trying to say with it. I believe this could be a dig at Apple of some sort, it just seems odd they decided to put a bunch of Apples on there. I hope the company will launch this handset in 3 days so that we can find out what is this all about and perhaps put this rather odd teaser in some sort of context. Do you have any idea what are these Apple supposed to present here? If you do, please, feel free to share. Either way, this handset will sell like crazy if those are in fact its specifications and Meizu decides to sell it at only 799 Yuan ($130).