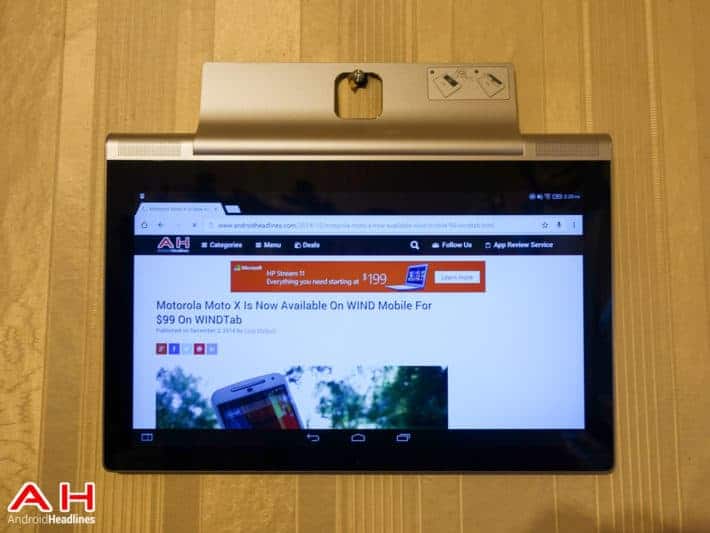 Earlier this year, Lenovo upped the ante when it comes to their Android tablets with the launch of the Yoga Tablet 2 and the Yoga Tablet 2 Pro. The 10-inch Yoga Tablet 2 is pretty standard fair for Lenovo and features all of the hallmarks of their Yoga line, including a new ability to hang the tablet from certain hooks and such, but the Pro version is a different beast altogether. Launching with a 13.3-inch 2560 x 1440 display, a Pico Projector and an honest to goodness subwoofer, the Yoga Tablet 2 Pro is one hell of an Android tablet. Now, it's coming to India.

For RS 49,490 ($799), the Yoga Tablet 2 Pro will be available from Flipkart and while it sure isn't cheap, there's a lot of value here. Powered by a quad-core Intel Atom, the Yoga 2 Pro is no slouch and 2GB of RAM and 32GB of internal storage, it'll get whatever you need done pretty quickly. Where Lenovo hopes their larger tablet will stand out is with the Pico Project built into the grip of the tablet. This can display an HD image on a wall without the need for any extra hardware at all, and the JBL subwoofer on the back of the tablet should make it nice and easy to enjoy your movies and TV shows no matter where you are.

A complete media consumption device, we reviewed the Yoga Tablet 2 Pro, along with the smaller, 10-inch version earlier this year and we found them both to be competent, with the Yoga Tablet 2 Pro a surprising offering from Lenovo. You do pay a premium for these extra features, but if you've been looking for something that could genuinely replace your laptop, then the Pro version of Lenovo's Yoga Tablet is a fairly safe bet. The one thing that might be a turn-off for buyers is Lenovo's fondness to take design cues from iOS in part of their Android software. Still, with a subwoofer, a projector and a large 13.3-inch display there's not much this tablet doesn't do.