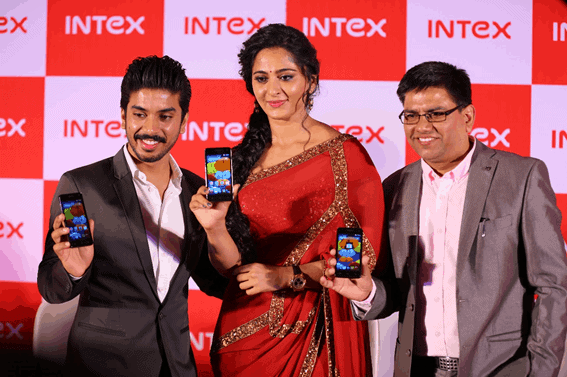 Indian smartphone manufacturer, Intex, are one of the more prolific manufacturers and frequently update their portfolio with new devices. The business, which started in 1996, has sold all manner of consumer electronic and white goods, from ethernet cards to washing machines. However, back in the summer the business appointed successful Indian actress Anushka Shetty as an ambassador for the brand and she is now the face of all Intex television commercials and similar. Intex appears to have raised their game because of the arrival of competitors into their market, chiefly the Chinese manufacturer, Xiaomi, who started selling devices back in July. Xiaomi are suffering from a temporary device sales ban, which should help Intex in the short term.

And perhaps with this in mind, Intex have presented two new devices for their Aqua range of smartphones, the Aqua R3 and Aqua V3. These have been listed on the company website with specification and prices, but at the time of writing we don't have the availability. The Aqua R3 and Aqua V3 are very much low-end devices. Both use a 1 GHz, single-core processor equipped with just 256 MB of RAM and a 3.5-inch HVGA screen. There's a 2 MP rear camera, a VGA front camera, a MicroSD card and dual SIMs. In terms of specification, so far these two devices are around and about the iPhone 3GS point. However, there is quite a difference between the Aqua R3 and the Aqua V3. The R3 uses Android 4.2.2 Jelly Bean and does not have a 3G radio. There's just 109 MB of internal storage and a 1,400 mAh battery. It'll be sold for INR 2,570, which is the equivalent of just over $40. However, missing the 3G radio, running an old version of Android with very limited internal storage and lacking 3G, it appears that the R3 is being sold as a dumbphone / feature phone that just happens to be based around Android. Google's own requirements state that a device must be running a recent version of Android in order to quality for Google Services: the R3 is a handset for calling and texting, rather than installing applications.

By contrast, the V3 is an entry-level Android smartphone. You get Android 4.4.2 KitKat, 3G support but, unusually, a slightly smaller battery at just 1,300 mAh. There's around 4.7 GB of internal memory for applications and data and it will sell for 3,260 rupees, around $52. It remains to be seen how the V3 will stack up against other entry-level Android devices, but with only 256 MB of RAM compared with Android One devices shipping with 1 GB, even running with Android KitKat the V3 is likely to be very compromised. Still, back in 2012 Apple were selling the iPhone 3GS for around $400 although the specification is certainly not the same between these two devices, it shows how inexpensive technology has become in just two short years. What do you think? If you live in India and are in the market for a new smartphone, is the V3 worth a second look? Let us know in the comments below.