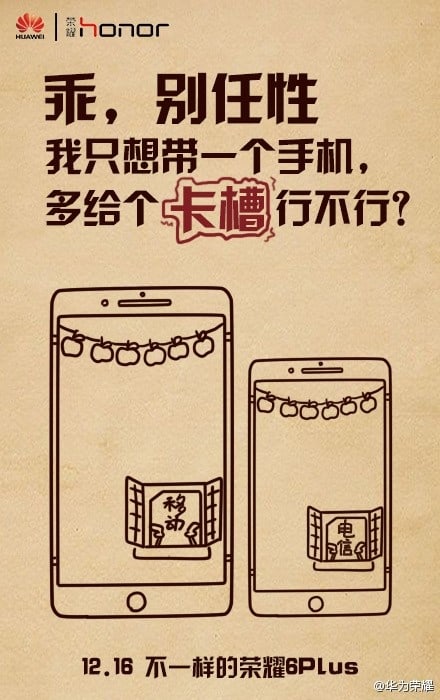 Huawei has been extremely active in the market lately. The company has released their first 64-bit processor, Kirin 620, quite recently and today they announced the special edition Ascend Mate 7 phablet called "Monarch" which will offer more internal storage, comes in Amber Gold color and you also get some goodies from Huawei (China only). Huawei will hold an event on December 16th though and we've seen a ton of leaks over the last couple of weeks which basically revealed what we'll see announced there. Glory (called Honor in certain regions) 6 Plus handset will be in the spotlight, but the company will also unveil the Kirin 620-powered Glory 4X handset which is already listed for pre-sale on Huawei's webpage in China.

That being said, we have some new information to share with you regarding the Glory 6 Plus handset which will launch in four days. This Chinese company has once again teased its upcoming handset, if you take a look above this article you'll notice the teaser image. The image isn't all that revealing, but it does show us two devices. The smaller device on the right might be the aforementioned Glory 4X or the mysterious third device we'll see launched on December 12th, the date which was once again mentioned here. Glory 6 Plus is expected to cost around 1,999 Yuan ($323) according to rumors. Regarding this handset's specs, on the front side you'll be able to find a 5.5-inch 1080p display along with the usual array of sensors and a front-facing shooter (we still don't know the resolution though). This device will quite probably be powered by Huawei's Kirin 925 octa-core processor (big.LITTLE configuration) along with 3GB of RAM. 3,500mAh battery will be here to power on the device and Google's Android 4.4 KitKat OS will come pre-installed with Huawei's Emotion UI on top of it. Two 8-megapixel cameras will be located on the back of this handset and those shooters will reportedly offer some great shots, we've already seen some leaked images. The Glory 6 Plus will measure 150.46 — 75.68 — 7.5mm and weight 165 grams.

If its name didn't reveal it, Glory 6 Plus is definitely aiming at the iPhone 6 Plus. The name itself is a dead giveaway, but if that's not enough for you, Huawei's Glory 6 Plus ads started popping up, if you take a look at the gallery down below you'll notice Huawei's New York ads. The pictures are taken at Times Square and as you can see Huawei is using the "Not Just Bigger" slogan, which is clearly a dig at Apple's iPhone 6 Plus. There you have it, December 16th is the date, let's see what else Huawei has to offer.