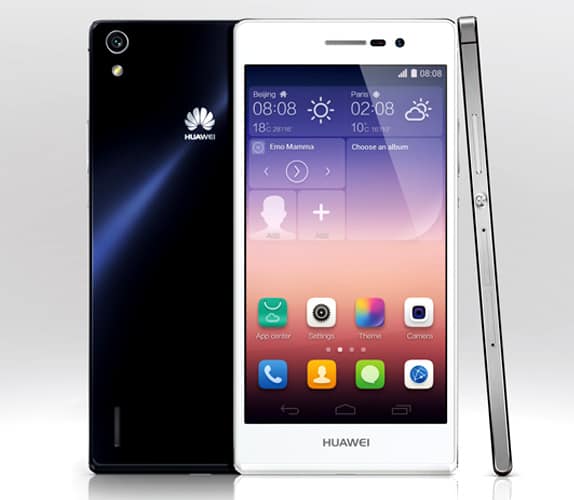 Huawei's Ascend P7 handset has been announced back in May and is available since June. Huawei also released a Sapphire display version of this handset a few months back. The phone had (and still has) limited availability outside of Asia, but those of you who live in India and are interested in getting this thing, well, you're in luck. This handset went on sale in India via Flipkart and Amazon India last month and it is now officially announced in that Asian country.

"Huawei's Premium 'P' series is one of the most popular series from Huawei's next generation smartphone league. Earlier in 2014, we introduced a marquee product named Ascend P6 that received excellent response from Indian consumers. With the launch of Ascend P7 in India, we endeavor to strengthen our connect with the young and tech savvy consumers by redefining excellence in craftsmanship and camera experience. The Ascend P7 has already received very positive response globally and we hope to replicate the global success in India," said Allen Wang, Head Of Consumer Business Group, Huawei Telecommunications India.

Huawei Ascend P7 features a 5-inch 1080p (1920 x 1080) display along with 2GB of DDR3 RAM and 16GB of internal storage (expandable via MicroSD card). This handset is powered by Huawei's very own HiSilicon Kirin 910T quad-core processor clocked at 1.8GHz which ships with Mali-450 MP4 GPU for graphics rendering. The handset comes with Android 4.4 KitKat pre-installed on top of which you'll find Huawei's Emotion UI 2.3. This skin features a number of software features like super power-saving mode, customizable clock and home screens, harassment filter, permission manager, notification, and network management, etc. If you take a look at the back of this handset, you'll notice a 13-megapixel camera (Sony BSI sensor, F2.0 aperture) flanked by an LED flash while there's a 8-megapixel camera located on the front side of the device. 2500mAh battery ships with this handset and 4G LTE connectivity is also on board.

Ascend P7 comes in black color only and is already on sale all over India for Rs. 24,799, which is around $400. Did anyone out there purchase this handset, do you like it thus far?