The HTC One M8 is one of the best smartphones of the year, if not the best. HTC’s sales aren’t going all that well and the company had to cut costs this year in order to turn profit, but the One M8 did sell like hotcakes and improved HTCs results in the quarter it became available significantly. The device’s design is modern and sleek and its specifications are nothing to scoff at, not to mention HTC’s Sense UI which keeps on getting better and better with each new iteration.

That being said, we’ve been seeing a ton of leaks and rumors regarding its successor, the One M9 “Hima”. We’ve seen some leaked specs earlier this month, courtesy of @upleaks, and the phone has popped up on AnTuTu benchmarks recently and confirmed leaker’s previous information. According to AnTuTu listing, the HTC One M9 “Hima”, will feature a 5-inch 1080p (1920 x 1080) display along with 3GB of RAM for your multitasking needs. The phone will be powered by Qualcomm’s 64-bit Snapdragon 810 octa-core chip clocked at 2GHz which ships with an Adreno 430 GPU for graphics processing. Android 5.0.1 Lollipop will ship with this device with HTC’s Sense UI on top of it. 20.7-megapixel camera will be located at the back of the device, and you’ll be able to find a 13-megapixel (possibly UltraPixel camera) on the front of this device. This device is listed on AnTuTu as “HTC6535LVW (hima)”, which is a dead giveaway of course. I have to say that the Snapdragon 810 CPU seems a bit fishy, because it probably won’t be available for another couple of months, but who knows.

HTC One M8 was announced back in March, so HTC is due to an upgrade soon. The One M9 might launch even sooner than March though, HTC has started sending out invites for company’s CES event on January 5th, so there’s always a possibility they’ll announce this thing on CES, though I doubt that. This is more of a separate event announcement and it just seems too early for HTC to announce it, but I really do hope they will do that, because on paper, this is a great phone. If the company manages to keep their design language with a few improvements and implement these specs in that device, I have no doubt this phone will sell like crazy. 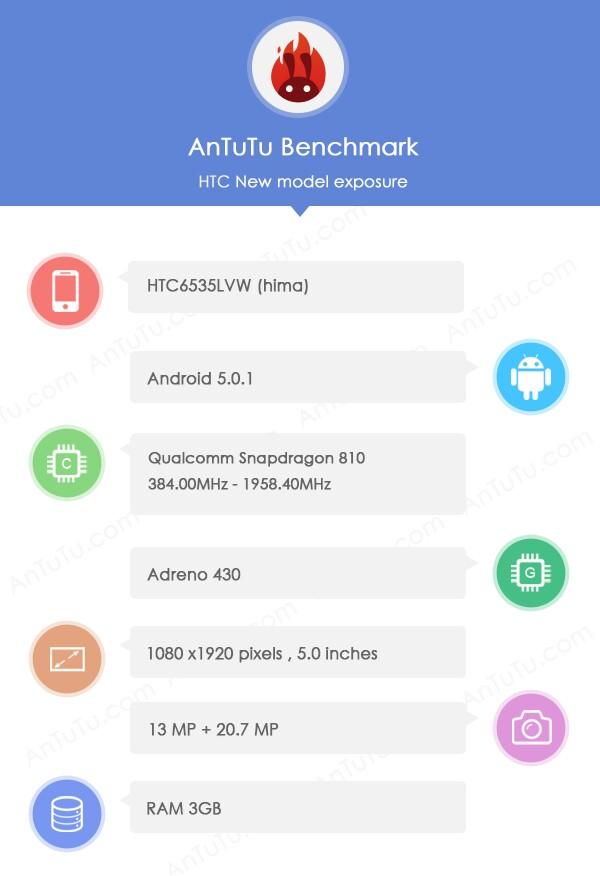