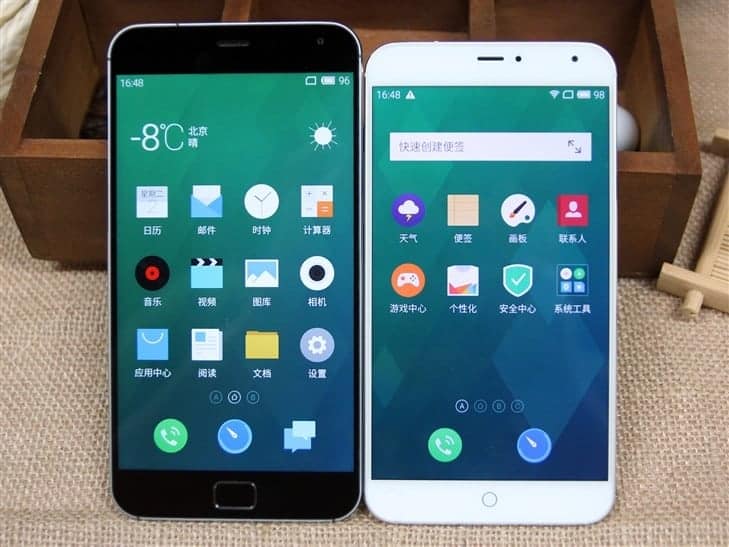 Chinese smartphone market is extremely saturated. There are many companies which make affordable and yet great devices, but Xiaomi and Meizu somehow manage to stay above the competition as far as that is concerned. Lenovo and Huawei are probably more popular brands if we look at brand awareness globally, but Xiaomi and Meizu do make great, unique flagship devices and price them really low and thus isolate any competition. Meizu recently announced company's new MX4 Pro handset, only two and a half months after releasing the original MX4 handset. That move actually surprised many people, but Meizu managed to sell a ton of MX4 handset thus far and the company received 6.7 million pre-orders for the MX4 Pro in just two weeks since its launch. I'd say they're doing great, even better than expected. You don't know which of the two devices you should buy? Well, perhaps we can help you with that.

Let's start with the price, Meizu MX4 is currently priced at 1,799 Yuan ($292) while the MX4 Pro will go on sale on December 6th (it's currently still available for pre-order only) and will carry a price tag of 2,499 Yuan ($406). This is not exactly a huge price difference and you do get some benefits if you purchase the MX4 Pro handset. MX4 Pro is a more future-proofed device, it sports a bigger and higher-res display, a more powerful processor, more RAM and a fingerprint scanner below the display. The display and a fingerprint scanner really don't mean it's future proofed, but more RAM and a more powerful processor sure do. Anyhow, let's take a more detailed look at the specs of these handsets.

Starting from the general design, these devices have the same design language. The MX4 Pro is bigger, wider and thicker of the two and it does sport a fingerprint scanner below the display instead of the "dot" capacitive button, but the materials are the same and as I said, the design language is also the same. Basically the only difference when it comes to these devices comes down to what I mentioned in the second paragraph. Meizu MX4 measures 144 x 75.2 x 8.9mm compared to MX4 Pro's 150.1 x 77 x 9mm, while MX4 Pro is also 11 grams heavier than the MX4, 147 vs 158 grams. Meizu MX4 features a 5.36-inch 1920 x 1152 IPS LCD display while the MX4 Pro sports a 5.5-inch 2560 x 1536 IPS LCD panel. The original MX4 ships with 2GB of RAM while the MX4 Pro comes with an additional gig of RAM, coming around to 3GB of RAM. The original MX4 is powered by MediaTek's MT6595 octa-core CPU which comes with a PowerVR G6200 MP4 GPU, while its younger brother comes with Samsung's Exynos 5430 octa-core chip under the hood and Mali-T628 GPU for graphics processing. The only remaining differences have to do with battery size and front-facing cameras. MX4 sports a 3100mAh battery while the MX4 Pro ships with a 3350mAh unit. Regarding the cameras, the MX4 comes with a 2-megapixel snapper while the MX4 Pro sports a 5-megapixel camera.

That's basically it as far as differences go. Both of these handsets come with 4G LTE support, 20.1-megapixel IMX220 sensors from Sony and run Android 4.4.4 KitKat with Flyme OS on top of them. Cameras perform differently though, which is to be expected. You can take a look at our in-depth camera analysis if you follow this link. Both cameras perform rather well, though there are some significant differences between the two. Both of these handsets are available in 3 main models, 16, 32 and 64GB ones. You'll get a ton more information as soon as our Meizu MX4 Pro full review gets published, which should happen rather soon, so stay tuned for that. In the meantime, take a look at a bunch of images down below and tell us your thoughts when it comes to both of these devices.