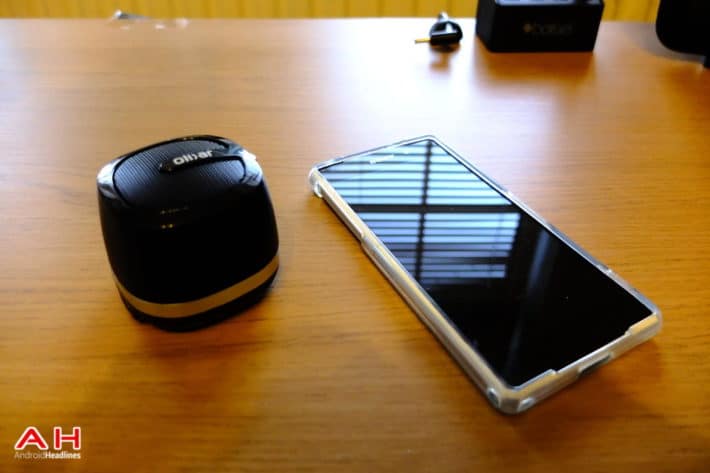 These days, Bluetooth speakers are available from any brand you choose. With some seriously powerful options available, right down to more conservative ones and as such it's hard to know what's worth your hard-earned dollar. A lot of the time, it comes down to what sort of physical size you want in a Bluetooth speaker. If you're looking for something more stationary there are brands out there like JBL and co. that can offer that, and many of them sound great. However, it's more difficult to make a small Bluetooth speaker that's not only as portable as it should be, but also sounds good. So, what of this small offering, the Olixar Babyboom?

There's no denying it's a small device, you can see it in comparison to my Xperia Z2 above, as well as an SD card in the gallery of images below. Its size makes the Olixar a really nice option for those looking for a truly portable option. This will gladly fit into a jacket pocket, be tossed into a bag or left in the car's glove compartment. It is of course a mono speaker, which isn't fantastic, but this isn't designed to fill a room, it's designed to bridge the gap where you want some more oomph, without the need to carry around something much heavier.

In that regard, the Babyboom succeeds quite nicely. It's far from perfect, that much is clear. When you get up into the higher volumes, sound does break up and things can start to sound quite distorted. For how loud this thing goes though, anything above 75% is going to more than loud enough. Sound quality wise, things aren't all that crisp, but it certainly gets the job done. It has at least some bass behind it, and it never once sounded tinny from either my Xperia Z2 or Nexus 9 over Bluetooth. It is what it is, it's a speaker designed to work and to be super-portable. It sounds okay, and will be a nice travel companion for hotel rooms, perhaps entertaining kids in the car, that sort of thing. Anything more than that and you'd be expecting too much from the Babyboom.

There are a few extra features here; it doubles as a loudspeaker for incoming calls, there's a loop for a lanyard or wrist strap and there are few buttons on its base to control playback. As a speakerphone, it doesn't sound great, but it did sound better than the earpiece on my Z2, and I would prefer having conversations using this than the speakerphone on my Z2. The mic isn't too sensitive, and callers often noted I was "far away" even up close to the Babyboom. Again, this is a small unit and it doesn't exactly cost the earth, either. You can take a look at more pictures in the gallery below.

The Olixar Babyboom is available from Mobile-Fun in the UK here.