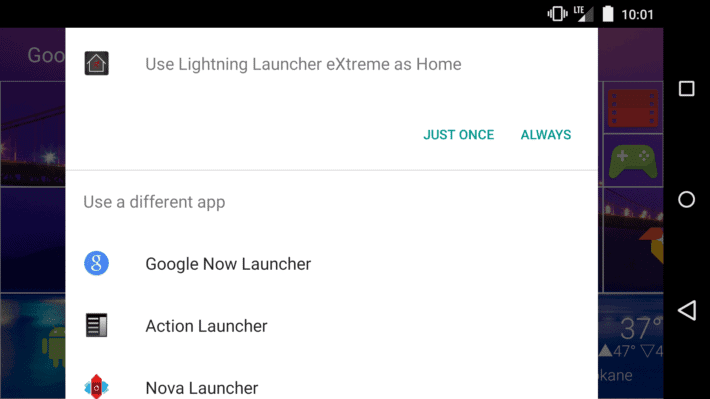 Yesterday afternoon, after being done with enough to satisfy the academic shoulder-devil, I treated myself to some enjoyment with my Android phone. I sat down, and an hour later I had a Windows 8.1 metro look-alike, scrapped it for the Google Now Launcher, but decided to remake it to look like and function like the Ice Cream Sandwich (Android 4.0) days of old. Now, that’s all well and good, but why mention it, right? Well, I had to switch my launcher preferences, and that’s something that some people on Google’s latest OS version might not know how to do, especially because the process is ever-so-slightly different from how it was on KitKat (Android 4.4) last year.

So, if you’re like me and have a bunch of launchers installed on your device, then you probably spend too much time customizing, though that’s hardly considered bad when you look at what you’ve made. Anyway, if you’re like me, you enjoy using different launchers for different moods or settings throughout your day, and you might just download another launcher to give it a try since it’s been filling up your various social media streams constantly, but how does one manage these sometimes-numerous launcher interfaces and switch between them?  Here’s how to switch launchers in Lollipop.

In KitKat last year, we saw the inclusion of a settings menu option called ‘Home’ which let you select from your installed launchers which would be the one that the home button return you to. That feature has simply been re-skinned to match the Lollipop aesthetic style of lightness and Material Design. To use this actually-highly-useful feature, go into Settings, and under the Device section, it’ll be the first option. The little trashcan will be that Material aqua-teal if you downloaded it, and if the launcher came pre-installed, it will be greyed out.  The current home launcher is the one with the dot next to it, and to switch which one gets that privilege, just tap the dot in front of another launcher.

Now, the other way might work if you got into that settings area and thought ‘Huh, maybe I should try some different launchers, just to see how I can really make my device MY device…’. For those folks, or anyone that downloads launchers, you’ll get a different way to switch. The reason for the difference is that the settings menu works for currently installed launchers, whereas this method only actually presents itself to you if you have downloaded a new launcher then press home. The interface is similar to the ‘Just Once’ and ‘Always’ found on Android before Lollipop, just this time it’s across the bottom of the screen, instead the center of it.

It looks relatively the same, and has an extra hiccup in my opinion. If you have just downloaded something like Nova launcher (which is highly recommended, by the way) and have been using the Google Now Launcher up to that point and want to go straight into Nova, tap home, and you’re presented with the menu at the bottom. You’ve got the ‘just once’ and ‘always’ options, but it’s a little different now. So, to use a different launcher than you were before, you have to select it from the list under the previously-default launcher. The process then takes you into that launcher. The next time you press home, you’ll be offered the same choice, but the new launcher will now appear as the recently-used one.  From there, you can tap ‘always’ and it’ll be set in stone until you download a new launcher or go the settings menu route. If you don’t want to deal with the newest addition to your launcher family right then, and just want to get back to your homescreens and widgets, then just choose ‘always’ from the first time you’re offered the choice, then come back to it using the settings menu method.

Now, that may have seemed long-winded, but some people (like myself) might find the new implementation of choosing a default launcher to be different and possibly obnoxious enough to make you go uninstall that new launcher so you don’t have to deal with the interface. We understand, but now you know how to do it. Which interface (4.4 and below or 5.0 and up) do you think is better for the average or first-time user? Which launcher is your current default or favorite?  Let us know down below.