Everyone loves a good deal right? Surely. Many of us don't mind paying full price for stuff if the cost is for things we really, really want because hey, that's just business and we've probably become accustomed to paying whatever manufacturers, services, or businesses demand most of the time. With that said if you're like me, you'll snag a deal anywhere you can because why not? Saving some money is a good thing. There are lots of ways to save money but one of the up and coming ways to save in the past couple of years has been through services like Groupon and Living Social. Never heard of these websites and apps? Well it might be time for you to check them out if that's the case, because thery're going head to head in this week's app battle. We'll go through a few features of each app, then throw them up in a Google+ poll to let you all decide which app is better and deserves to be crowned king. 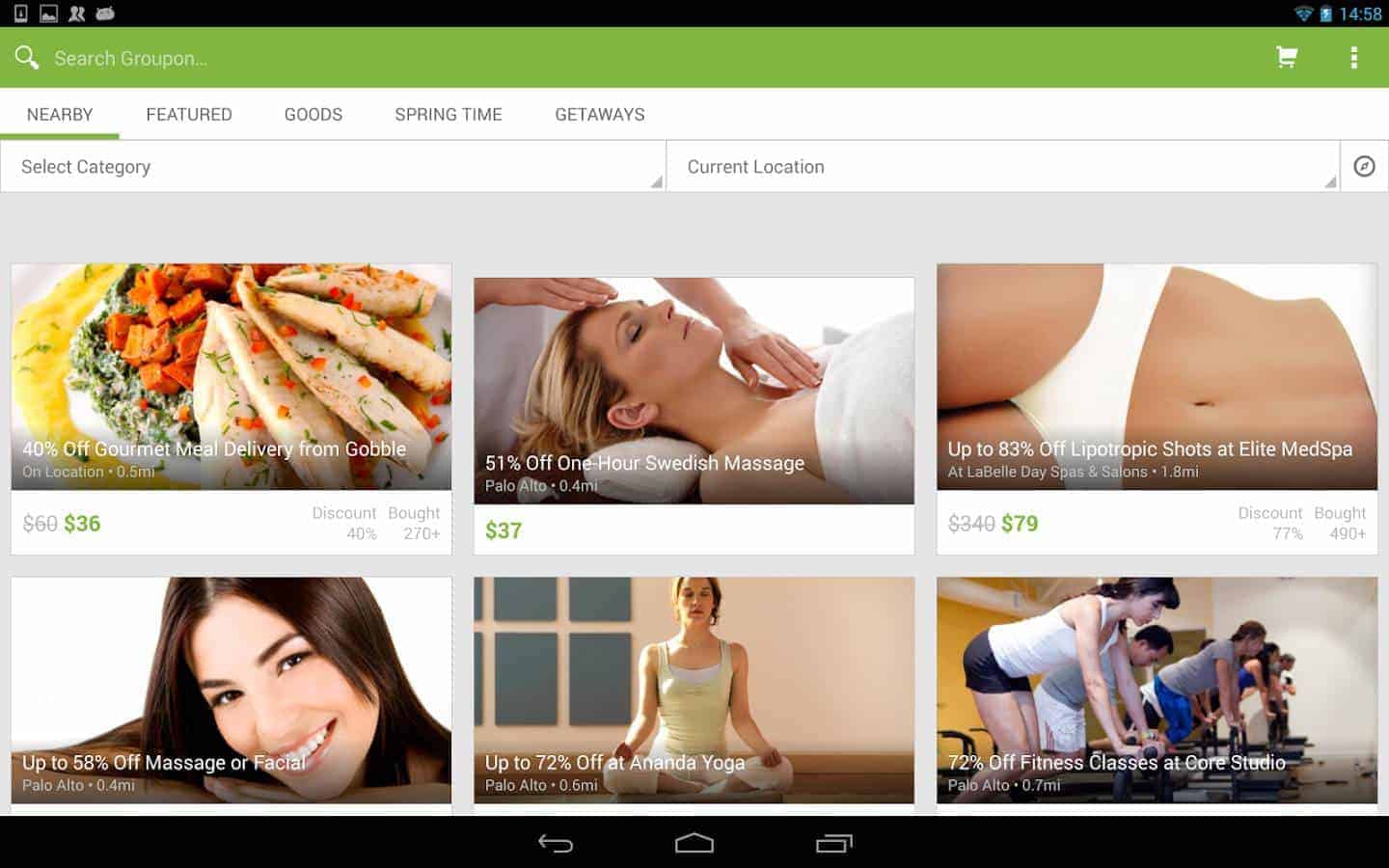 Groupon daily deals and coupons should be known by most people at this point, as they have been around longer than Living Social and they seem to offer a wider variety of deals that are not as focused around just your current location. They have tons of different deals and coupons on all kinds of stuff like trips and travel, all kinds of products, and even things wine tastings, movie tickets and online learning courses. Of all the things they have deals on, most or all are anywhere from 50%-70% off the regular cost outside of Groupon.

The deals pertain to buying almost anything and everything, ans Groupon is supported in 500 different cities across the globe so there will be plenty of things for you to find relevancy in. Whether you want a relaxing massage or some great deals on a night out at your favorite restaurant in a different city, Groupon should be able to provide. Using the Groupon app you can buy and redeem directly from the device, so that means no having to print any coupons out to take with you for your purchased deals. You can also track your purchased vouchers by location and expiration date, a handy feature since some vouchers don't have to be used right away. Everything is categorized out into easy to read and view sections too, like nearby for local deals, feature deals, deals on goods and the Groupon Getaways for the travel deals. 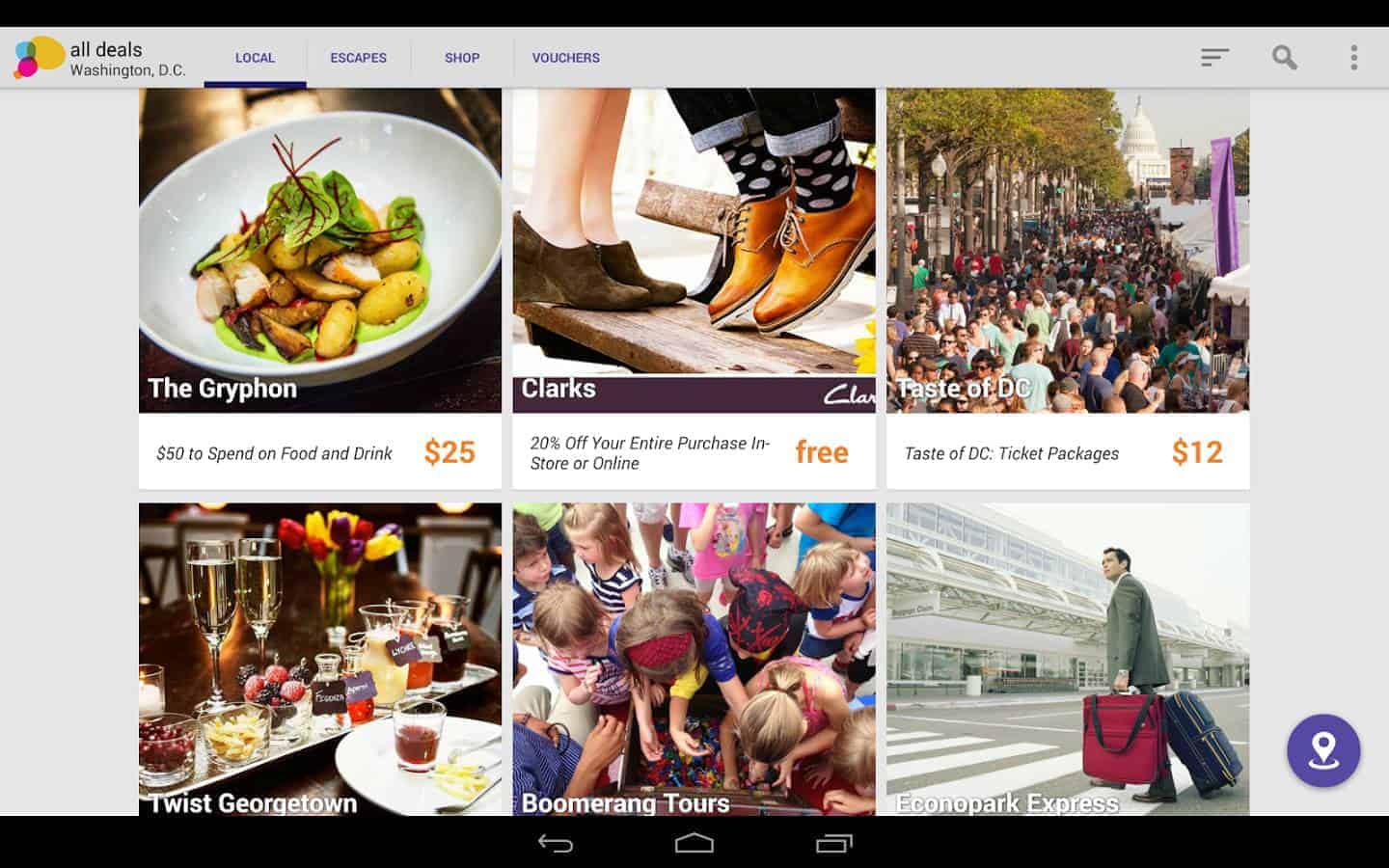 Living Social is easy to understand if you think of it just like Groupon, but more for locally based deals and savings as opposed to a wider cast net of products, services and offerings like Groupon. Living Social offers you all kinds of deals on stuff just like you would find in Groupon but for locally obtainable items and services. You can find great deals with huge savings on food at restaurants, savings on products from stores around your area, and even purchases that can be made online and shipped out to you. It is geared more towards local, but you can find great deals that are as much as 80% off on great local restaurants, relaxing spas, and unique products and even travel deals just like within Groupon.

Using the Living Social app, you can find what you're looking for by browsing, typing in search terms to narrow things down or by filtering stuff out by choosing the appropriate category like local, escapes, vouchers, or shop. Once you discover what it is you're looking for you can redeem your purchases and vouchers right from within the application so you don't have to waste paper and ink printing things out, and of course you can buy things through the app too. Plus there's a bonus with Living Social where you can get $10 off your first purchase of $30 or more using Google Wallet, an incentive to use Google Wallet if you don't already.

So there you have it. Two great apps and services that offer up some amazing deals on local, travel, and all kinds of products, all purchasable through the app and all redeemable in the app using your smartphone. Both apps are free of course, but which one suits you best? Who deserves to win this battle? Vote in the G+ poll and feel free to share your thoughts.