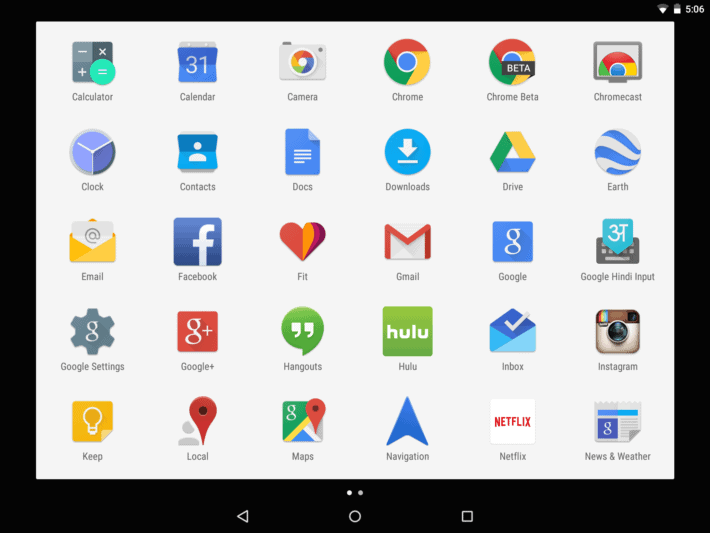 Notice anything odd about the screenshot above? Well, as many of you Android fans are already very aware of, the first update to Android Lollipop began rolling out just a few days ago. This update to Android 5.0.1 was a simple bug-squashing update to Lollipop that supposedly squashed quite a few annoying bugs, but upon closer inspection it looks like this 5.0.1 update did a little more than that, at least on the Nexus 9.

After updating your Nexus 9 to Android 5.0.1, you may notice that your device now has a few extra apps in the app drawer. Well, you’d be correct in this assumption, the update adds two new apps, Navigation as well as Local. Back in the old days these apps were on every Android device before Google made the decision to combine them all into the Google Maps app. This was a wise decision on Google’s part as it eliminated two apps from consumers’ devices. So why would Google decide to backtrack and in such an obvious way? And why only on the Nexus 9?

It seems like such a bad decision to add two apps to consumers’ devices, one of which does absolutely nothing except open up the Google Maps app. When the Local app is opened, it just open the Google Maps app and prompts you to type in a location, at which point it offers you directions. It is exactly the same as if you had just opened up Google Maps, there is nothing different. So why? Well, Google probably made a mistake here. There is no way we can see Google having a legitimate reason for doing this, all of these two apps features are inside of the Google Maps app, there is literally, absolutely no reason for them. The oddest part of this is that the Navigation and Local apps only appear to have popped up on the Nexus 9 following the 5.0.1 update. Neither the Nexus 6 nor HTC One M7 and M8  Google Play Editions have the apps after the update.

We will probably see the Navigation and Local app taken off of the Nexus 9 in the next Android update or even with an update to the Google Maps app. These two apps being added surely, thankfully, won’t be something that sticks around again. If you have a device that has been officially updated to Android 5.0.1 then drop us a comment and let us know if you have the Navigation and Local apps on your device after the update.