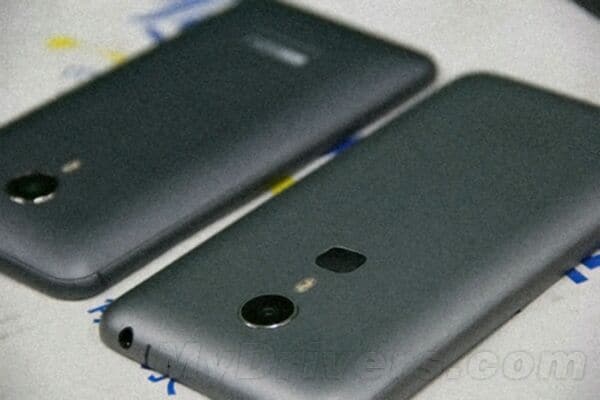 Earlier today we shared with you different MX4 Pro designs, courtesy of Meizu's Italian blog. These images showed us 3 different Meizu MX4 Pro designs which got us completely confused. Up until now we've seen a couple of different renders of MX4 Pro, but one of them stood out, the one with the rectangular home button which doubles as a fingerprint scanner. We basically though we know everything there is to know about the device and then these new renders leaked. Besides the one with the rectangular button, we got another one with the circular button which has an LED notification light around it and looks really cool and the last one showed us a design which resembles the most to the original MX4, at least its front side does. This last render has the "dot" capacitive button below the screen, but no fingerprint scanner, well, we might know why that is.

We have a new image to share with you, directly from China. If you take a look at the image above, you'll see 2 handsets from the back, the left one is quite probably the original MX4 while the right one is kind of a mystery. Basically every render / image of the MX4 Pro we've seen shows us the design on which the fingerprint scanner is located on the front side of the device, well, as you can see, that's not the case here. That might actually be the same handset I talked about in the first paragraph, which has a "dot" capacitive button on the front. This might actually be an early prototype which just leaked or something like that, on the other hand, Meizu might actually launch more than one device on November 19th.

To tell you the truth I really didn't expect this many leaks conflicting leaks when it comes to this handset and don't know what to think at the moment. I doubt Meizu will launch 3 differently designed handsets with the same specifications and my guess is we'll see only 1 version and the rest of them are just early prototypes or something like that. Either way, the handset will quite probably launch on November 19th, so stay tuned.