It is always an interesting comparison whenever a Nexus device is in the mix – in this case, we have the newest Nexus 9 tablet (made by HTC) up against the number one Android tablet maker, Samsung and their Galaxy Tab S 10.5.  In the Nexus 9 corner, we have a well-built, rather minimalistic design…and although in vogue, nothing on it really stands out at first glance – no fingerprint scanners, 3D cameras or other fancy bells and whistles.  In the other corner we have the Samsung Galaxy Tab S 10.5, perhaps the thinnest and lightest 10.5-inch tablet on the market with small bezels, fingerprint scanner, and lots of bells and whistles.

Despite being built by different companies and different sizes, there are a few similarities between the two devices.  They both have 16GB Models and they both have an 8MP main camera with an LED Flash and auto-focus.  They both offer dual speakers – the Nexus 9 has its speakers on the front edges and offer BoomSound, while the Samsung has its speakers mounted on the top left and right edges.  Pricing is also similar – the Galaxy Tab S 10.5 16GB LTE model is $600 off-contract and the 32GB Nexus 9 LTE model is $600 off-contract.  The Galaxy Tab S offers a 32GB model as well, although that model appears to be Wi-Fi only…the carriers are selling the 16GB LTE version.

Please look over the detailed specifications below and you can see just how these two premium tablets compare.  After that, we will look at each individual device, look at the pros and cons, and then try to pick a winner in this comparison. 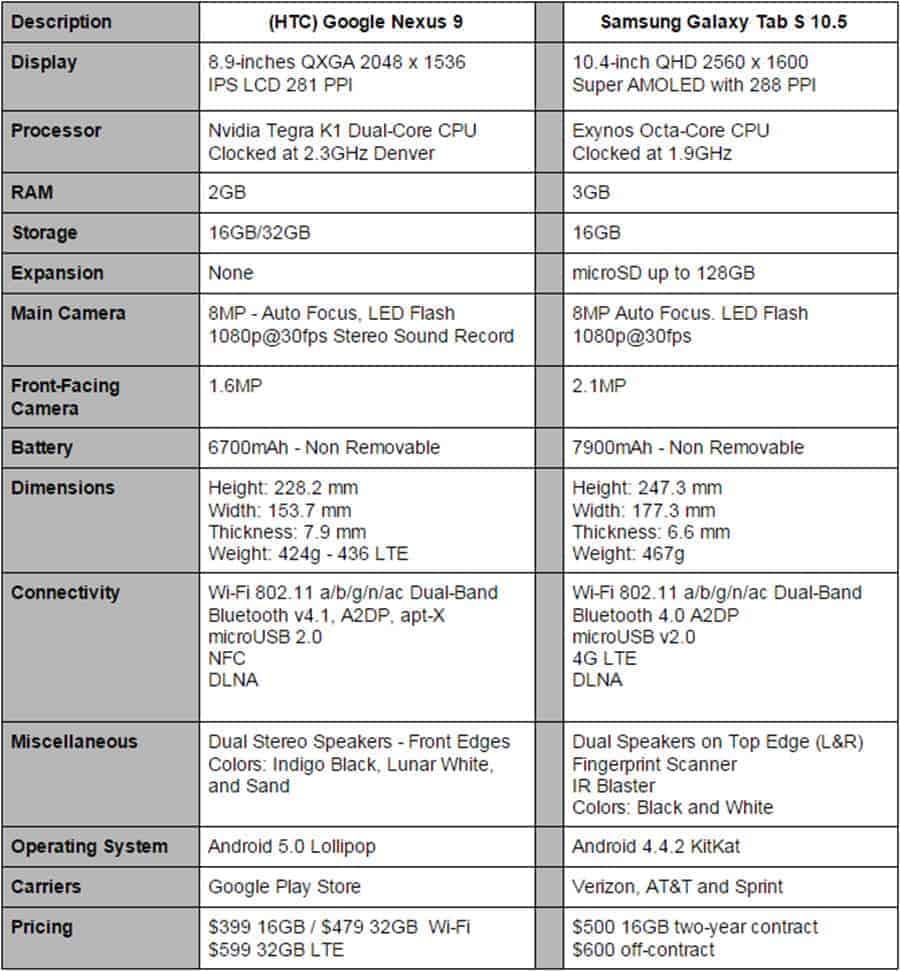 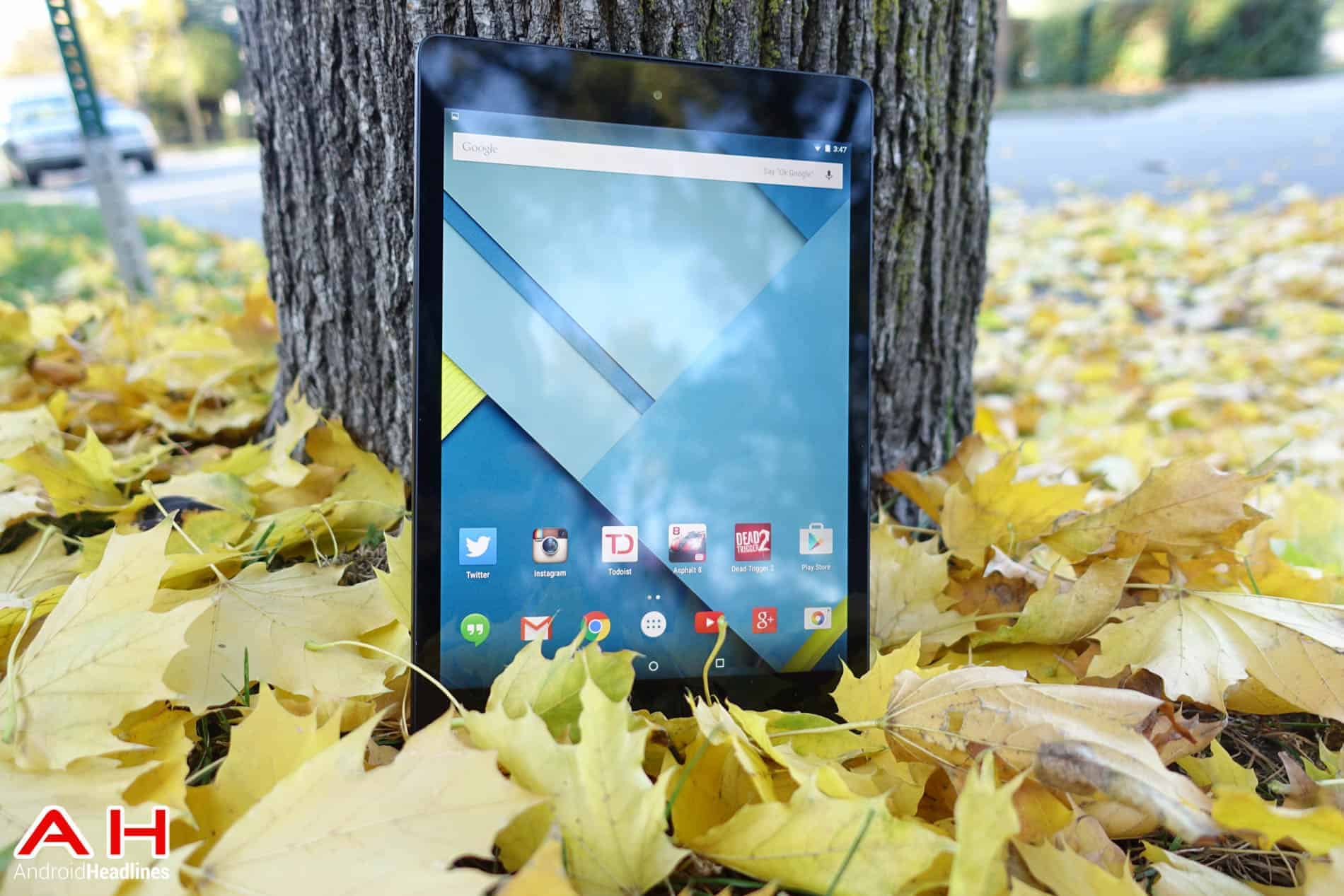 With throw-back looks to the understated days of Nexus devices, the well-made and solid Nexus 9 is not a real ‘eye-catcher’ or doesn’t have that ‘wow-factor’ when you see it from a distance.  It is very comfortable to hold and is very much like a bigger Nexus 7 tablet with the soft-touch plastic backing.  It does have wide bezels for a new generation tablet, but then that gives you plenty of area to grasp.  The Nexus 9 by HTC is part of the revamping Google has done this year with their Nexus products – bigger size (no 7-inch), better specs, and higher pricing.

The Nexus 9 comes to us with an 8.9-inch QXGA IPS LCD display with 4:3 ratio (a little squarer) and a resolution of 2048 x 1536 pixels with 281 Pixels-Per-Inch (PPI).  The display is beautiful, but not quite in line with the brilliance of the QHD Super AMOLED display on the Galaxy Tab S.  The processors also differ quite a bit – the Nexus 9 uses an Nvidia Tegra K1 Dual-Core CPU clocked at 2.3GHz versus Samsung’s own Exynos Octa-Core clocked at 1.9GHz – both should give you great performance.  The Nexus 9 uses 2GB of RAM, while the Galaxy Tab S provides 3GB of RAM.  Both offer 16GB of internal storage and the Nexus 9 also offers a 32GB LTE model as well…however, the Galaxy Tab S offers a microSD card slot to add an additional 128GB – there is no expansion on the Nexus 9.

Both devices offer identical 8MP main cameras with auto-focus and an LED flash…they also allow [email protected] recording as well.  The front-facing cameras (FFC) are slightly different – 1.6MP on the Nexus 9 and 2.1MP on the Galaxy S Tab – used for video chatting and social media selfies.  The Nexus 9 battery is sized at 6700mAh and is okay, but not great battery life – the 7900mAh in the Galaxy Tab S does a much better job of lasting throughout the day…or more.

As far as additional features, the most exciting thing about the Nexus 9 is the pure Android 5.0 Lollipop experience – many changes and improvements in this Android OS rendition.  It has the usual Wi-Fi, Bluetooth 4.1, microUSB port for charging and data transfer.  It is also NFC and DLNA compatible and comes in either a 16GB or 32GB Wi-Fi only model and also a 32GB Wi-Fi/LTE Model. 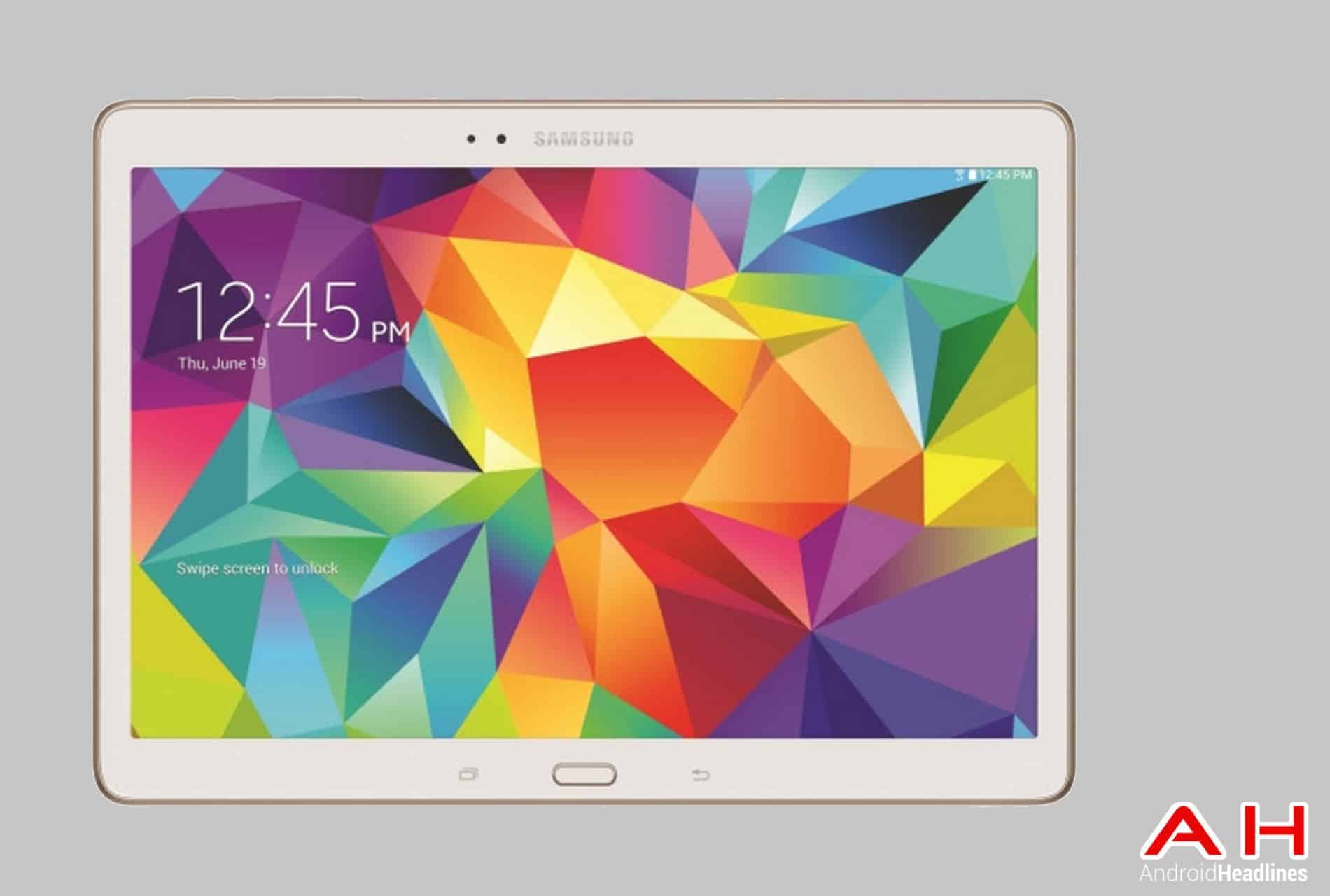 As with most Samsung devices, the Galaxy Tab S 10.5 tablet is a more ‘in your face’ kind of design – gold metal trim around either a white or charcoal plastic trim and the soft, dimpled back.  The bezels are small, almost too small to get a good grip, but, like the Nexus 9, the soft back offers a good grasp in your hands.  The speakers are poised at the top edges of the device keeping them out of the way when you are gripping the device.  As thin – 6.6mm – as it is, the Galaxy Tab S 10.5 feels solid and well-constructed.

What is so exciting about the new Galaxy Tab S series is that Samsung was able is use the Super AMOLED display that simply provides a certain boldness in colors and contrasts and side viewing angles that are not available on an LCD display due to the differences in technology.  The 10.4-inch QHD display offers up a resolution of 2560 x 1600 pixels with 288 PPI.  It is the perfect companion for movies, videos or gaming, with many adjustments to suit your tastes.

For processing power, the Samsung Galaxy Tab S uses their Exynos Octa-Core processor clocked at 1.9GHz.  The tablet has 3GB of RAM – which is used for easy multitasking.  It also comes with 16GB (LTE) or 32GB (Wi-Fi) of internal storage and a microSD Card slot to add an additional 128GB of storage.  The camera area is about a tie – both use an 8MP main camera and the Nexus 9 has a 1.6MP FFC versus the 2.1MP FFC on the Galaxy Tab S.  The Galaxy Tab S 10.5 also wins out in the battery department – 7900mAh versus the Nexus 9’s 6700mAh – and we know from testing that the 7900mAh will last almost 2 days of heavy usage.

As far as extra features go, the Galaxy Tab S has the usual Wi-Fi, Bluetooth 4.0, DLNA and a microUSB port for charging and data transfer.  It does lack the NFC of the Nexus 9, which is surprising for Samsung, as they normally include that capability in their devices.  It too has dual, stereo speakers mounted on the sides, adequate in sound, but not outstanding.  It also serves up a fingerprint scanner for unlocking the device or paying for an item with PayPal.  Samsung also provides an IR Blaster that allows your tablet to be used as a TV Guide and remote control.  It comes with Android 4.4.2 KitKat and is either $500 on a two-year contract or $600 off-contract, although there are many offers where you can get it cheaper. 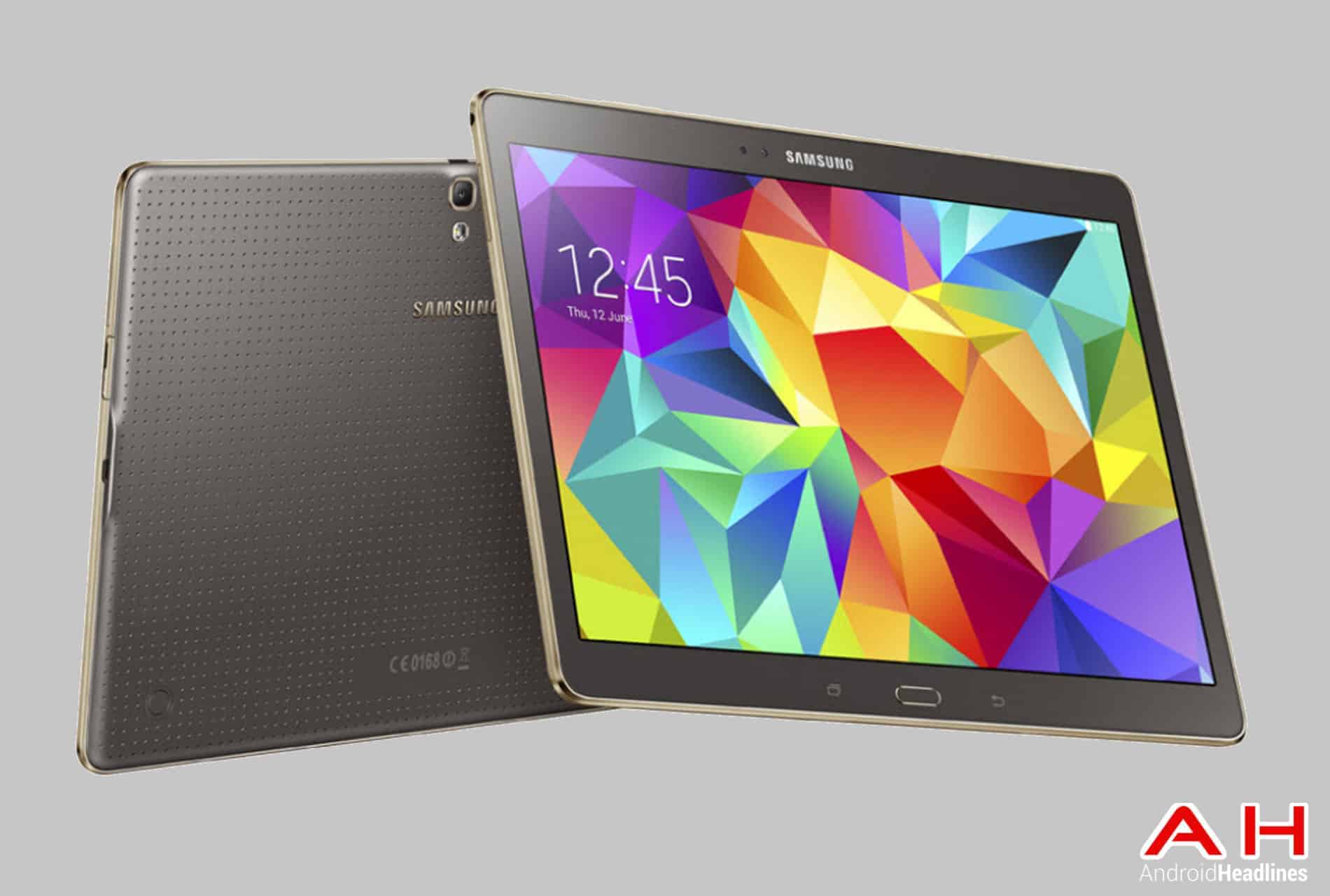 For this comparison, I have to go with the Samsung Galaxy Tab S 10.5 – larger size, better display, nicer looking, more memory, better battery and battery life, more features, IR Blaster TV controller, expandable memory, multitasking and fingerprint scanner/security.  The down side – there always is – no Android 5.0 Lollipop for a while and no quick updates with the TouchWiz overlay.

The Nexus 9 has a premium build, speedy performance and with its consistent Android updates makes it one of the best high-end tablets available, but when you take away the 5.0 Lollipop, you are left with a great tablet, but it just doesn’t quite stack up to the Samsung Galaxy Tab S 10.5.

Please hit us up on our Google+ Page and let us know which one of these terrific devices you would pick as the winner, and WHY…as always, we would love to hear from you.