We have a good one for you today – the HTC made Nexus 9 versus the LG G Pad 10.1 – HTC versus LG, two rivals in the smartphone world going at it in the tablet category.  Both tablets feel solid and have a soft rubber grip on the backing making them easy to hold, even for long periods of time – the large bezels (especially on the G Pad) don’t hurt your grip any, but a little hard on your eyes.

Other than being tablets, both using the IPS LCD display technology and each having a 16GB internal storage option, these tablets are very different. They both have the usual Wi-Fi (Dual-Band), Bluetooth (4.1 in the Nexus 9 and 4.0 on the G Pad), NFC capabilities and a microUSB port for charging and data transfer.

The G Pad 10.1 is from a line of three tablets they released this year and falls into the mid-range category.  Google was due for a new Nexus tablet – the past two years they came out with a 7-inch tablet and decided they would bypass the 7-inch this year and jump to a larger 9-inch display.

Please take a look at the detailed specifications in the chart below and see exactly where they differ, then we will look at each individual device and talk about its pros and cons to try and determine the winner of this comparison. 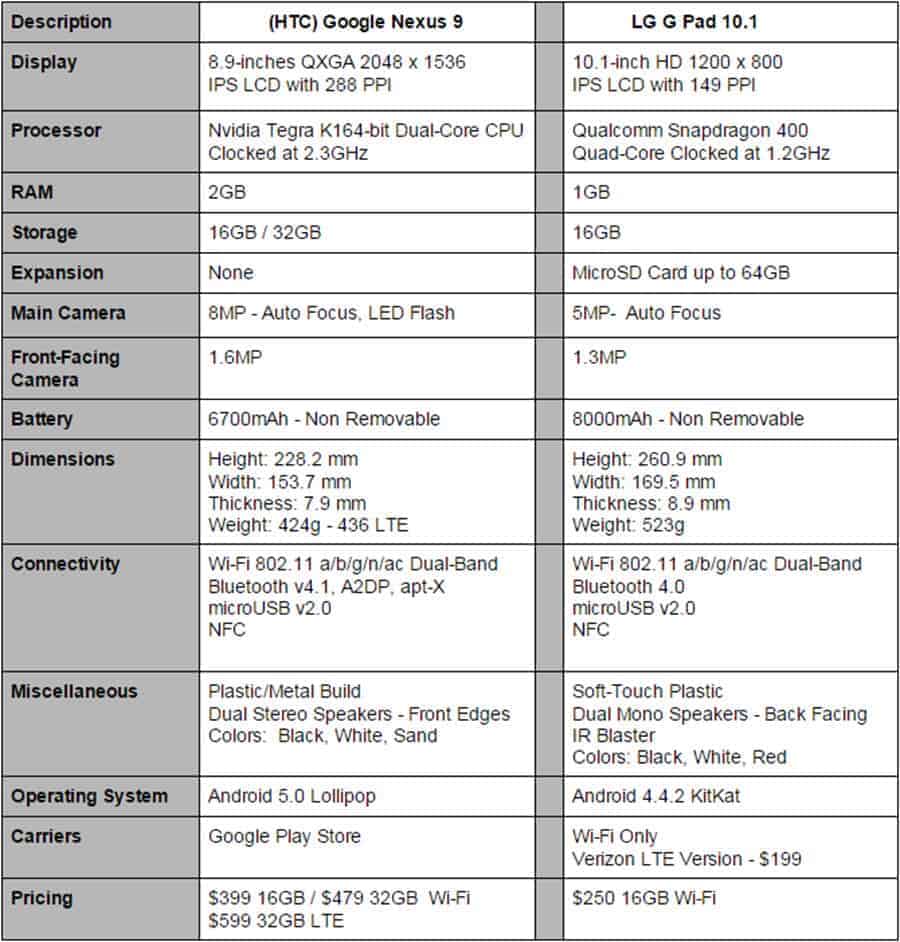 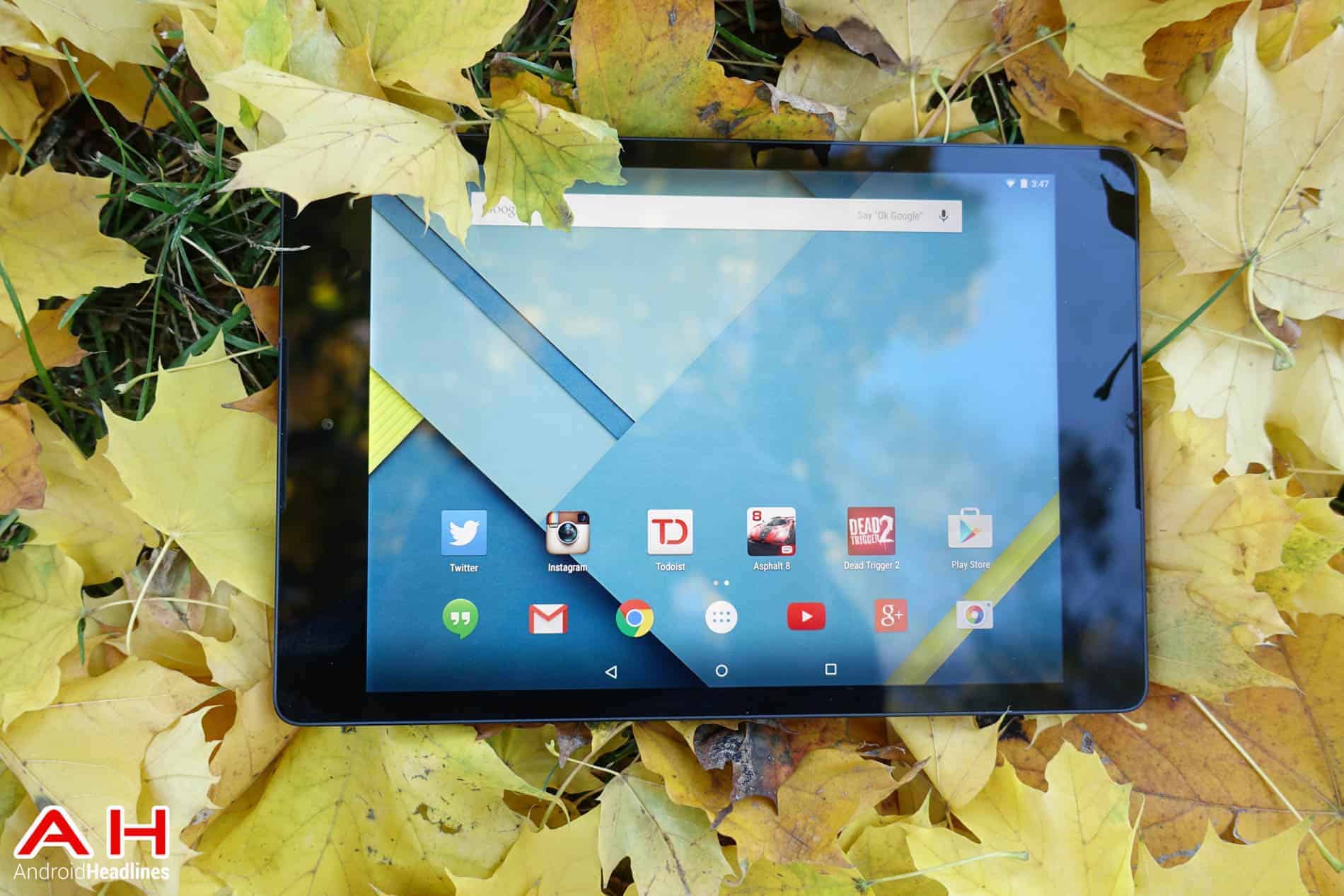 The new Nexus 9 is all new this year, commissioned by Google, HTC made this tablet for Google – they bypassed the Nexus 7 (made by ASUS in 2012 & 2013) and the Nexus 10 made by Samsung.  While this is completely new tablet, it has the usual black, rubbery and non-slip design on the back and rather minimalistic overall look…Nexus is known for value, not glitz.  It does have the famous HTC dual front-facing stereo BoomSound speakers for great sound while watching a video or playing a game.

The Nexus 9 comes with a 8.9-inch QXGA IPS LCD display with a resolution of 2048 x 1536 pixels and 288 pixels-per-inch (PPI) which is close to double the 149 PPI found on the LG G Pad 10.1.  HTC tapped Nvidia for their Tegra K1 64-bit dual-core processor clocked at 2.3GHz with 2GB of RAM – certainly better equipped for fast and smooth service over the G Pad’s Snapdragon 400 processor with only 1GB of RAM.  Both devices have a 16GB internal storage model and the Nexus 9 also adds a 32GB model, although there is no room for expansion, whereas the G Pad, has a microSD card slot to add up to an additional 64GB of storage.

Most people do not take many pictures with their tablets, but if you need to do so, the Nexus 9 will do a better job – it has an 8MP sensor with auto-focus and an LED flash.  It also has a 1.6MP front-facing camera (FFC) for selfies or video chatting.  The battery is only 6700mAh, but does not do too bad a job if you are not watching videos or gaming, but certainly loses out to the 8000mAh battery found in the G Pad.

The Nexus 9 comes in three colors – Black, White and Sand – and comes with the newest Android 5.0 Lollipop operating system and will always be the first device to get the future upgrades.  It can be purchased on the Google Play Store and runs $399 for the 16GB Wi-Fi model and $479 for the 32GB model and then $599 for the 32GB LTE model. 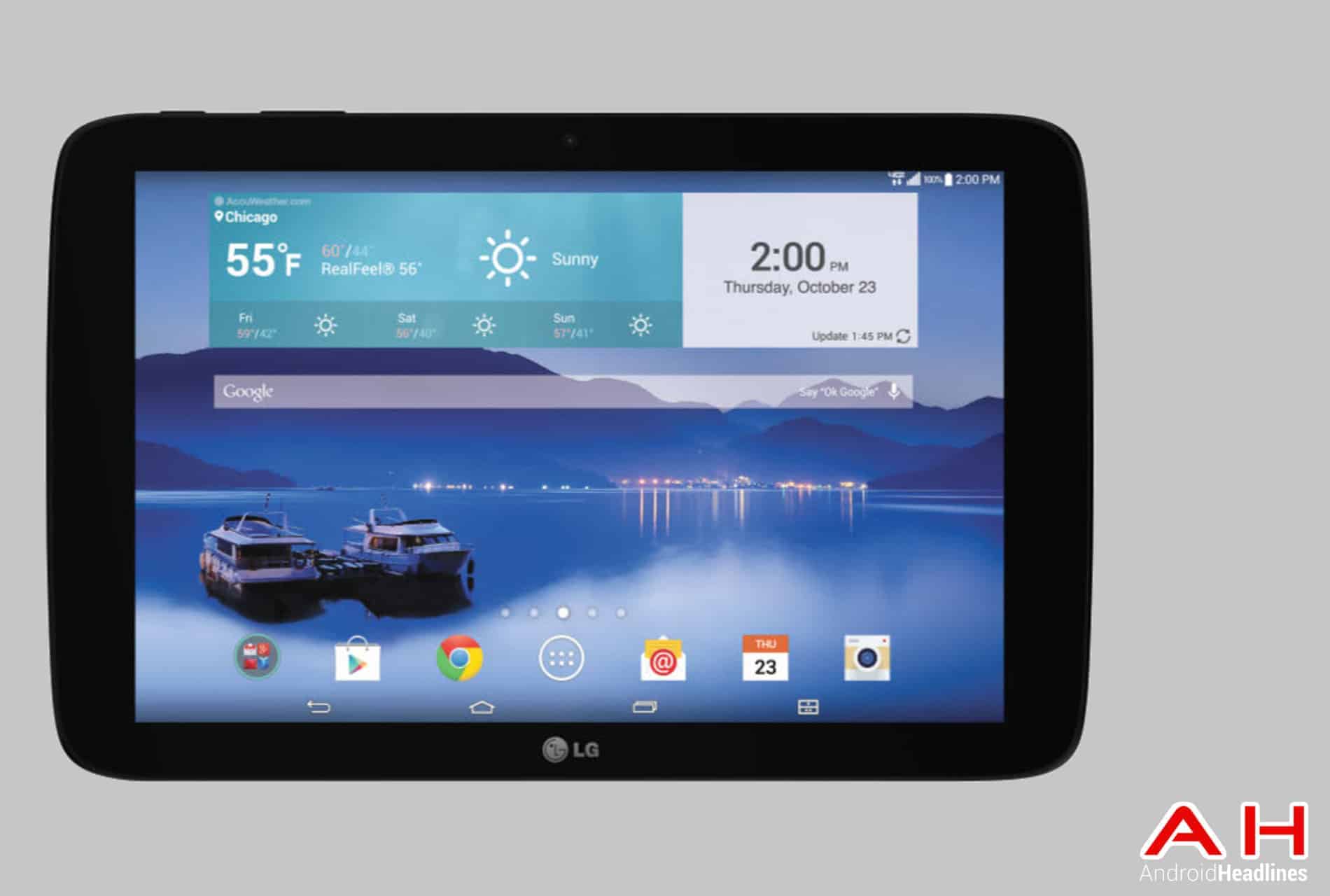 The LG G Pad line is a mid-range line of tablets and the G Pad 10.1 is no exception; and that bigger screen size, while not super-sharp is nice and big for gaming, watching videos or simply browsing the web.  While is does not feel cheap, it is nothing exciting to look at with its wide bezels and soft-touch plastic on the back.

The cameras on tablets are never very good and most do not even have a flash – the LG G Pad 10.1 has a small 5MP main camera that does have auto-focus and this is supported by a 1.3MP FFC for selfies or video chatting.  Where the G Pad really shines is it 8000mAh battery and it will easily last you all day, beating out the 6700mAh on the Nexus 9.

The LG G Pad 10.1 has dual mono speakers that are back-facing on the lower corners, which surprisingly put out the sound even though we tend to hold the tablet in that position.  Another nice feature is there is a built-in IR Blaster that will turn your tablet into a hug remote control for your TV.  The G Pad comes in Black, White and Red.  It runs Android 4.4.2 KitKat and is basically a Wi-Fi tablet, although you can get a LTE version on Verizon for $199 on a two-year contract or $299.99 off-contract. 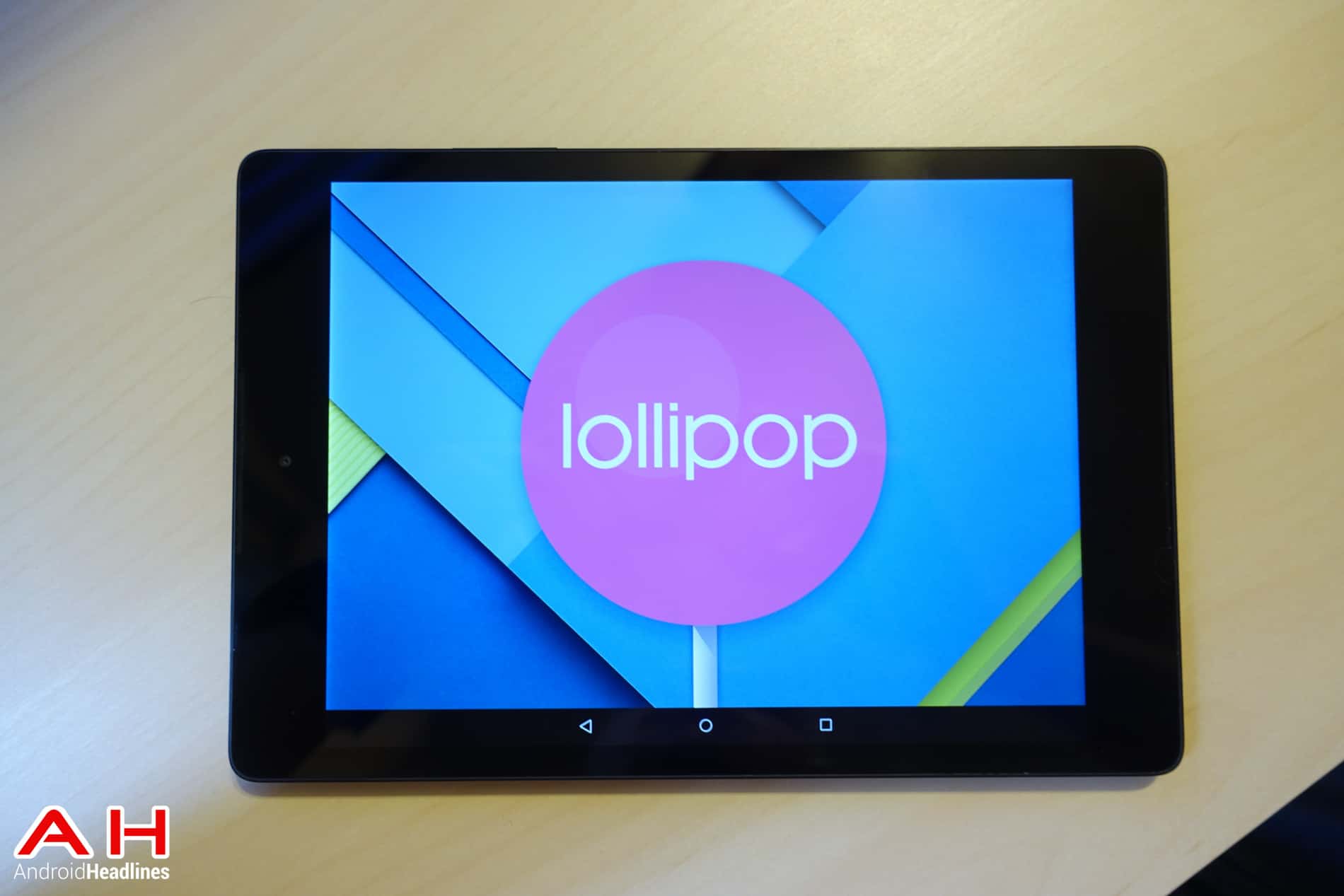 I chose the Nexus 9 because it definitely has the best specifications and is certainly higher-end, but the pricing of the LG G Pad 10.1 is very tempting for what you get.  So, I would say if you want the most specs, you’re a heavy gamer and money is no object, then go with the Nexus 9.  You will get a better display, a faster processor, more RAM, better camera, stereo speakers and Android 5.0 Lollipop.  If you are on a budget and do not mind Wi-Fi only or using LTE on Verizon’s network, then do not be afraid to consider the LG G Pad 10.1 – you will get a big display and great battery life…as well as save a $150.

Please hit us up on our Google+ Page and let us know which device you would choose – specs or value – as always, we would love to hear from you.