We got a good one for you today – anytime an Android device goes up against an Apple device, it is a good comparison.  This type of comparison gives us a chance to see just how well the Google Nexus 9 with pure Android 5.0 stands up against an Apple device with iOS 8.1.  We can compare the look, the build quality, the technical specifications and the way each device performs its tasks with its respective operating system.

We can see immediately that the Apple iPad Air 2 is the prettier of the devices – that thin, all metal case is really nice looking compared to the plastic and metal casing of the Nexus 9…Google likes that rubbery grip on the back and rather austere look with no flashiness.  Both devices have a rather large bezel on the landscape ends, and while it does allow for an easy grip on the devices, both could stand to be a little less obvious.

Despite the Nexus 9, built by HTC for Google and the iPad Air 2 built for Apple, these two devices share a few specifications.  Both devices have 2GB of RAM and both offer a 16GB model and neither have room for expansion beyond internal storage.  The next option for the Nexus 9 is 32GB and the iPad Air 2 offers a 64GB and 128GB model as well.  Both devices use an 8MP main camera with auto-focus, but the Nexus 9 adds an LED flash – something Apple just does not offer on their iPads.

Please take a close look at the detailed specifications below to see exactly where these two devices are alike and where they differ.  After that, we will look at each individual device and discuss some of its pros and cons in an effort to pick a winner in this comparison. 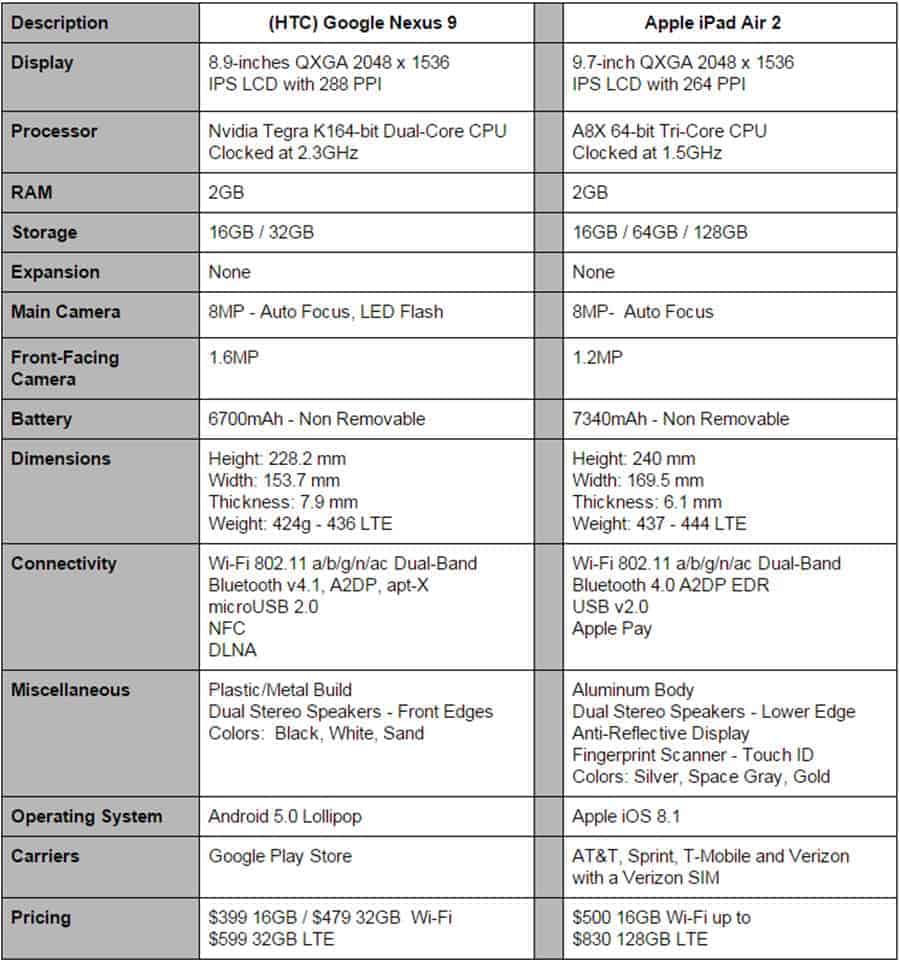 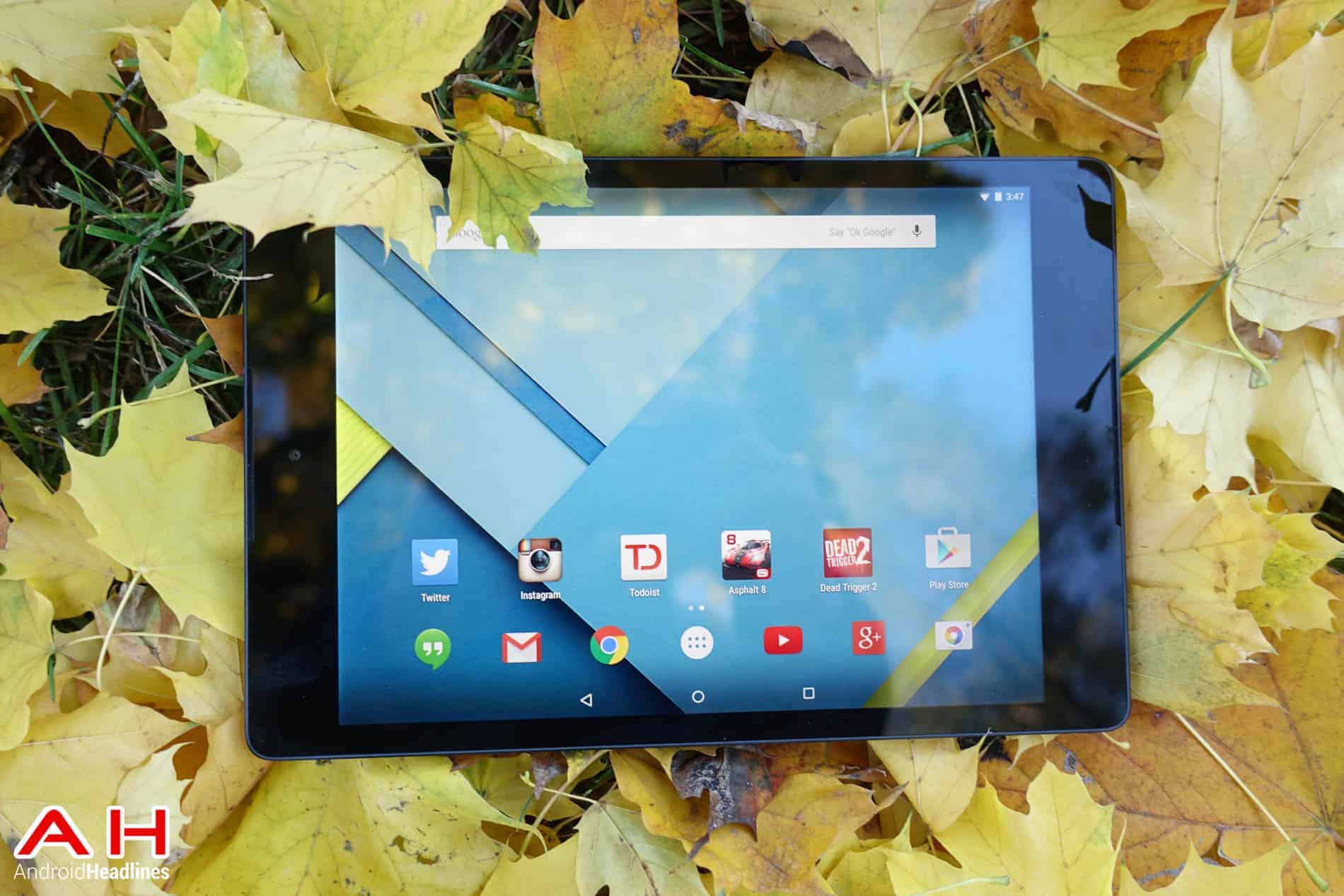 The new Nexus 9 is truly new this year – up until now, Google had a Nexus 7 tablet (2012 & 2013) by ASUS and Nexus 10 device by Samsung – so the Nexus 9 by HTC brings a totally new tablet to the table.  Google specifies the design, so it still has the usual black, rubbery, non-slip backing, and rather unexciting design with its small, metal trim around the edges.  It does have the HTC BoomSound stereo speakers that face the user and give a great sound – perfect for movies, videos and gaming.

The Nexus 9 has an 8.9-inch QXGA IPS LCD display, which gives it a resolution of 2048 x 1536 pixels and 288 pixels-per-inch (PPI).  HTC chose the 64-bit Nvidia Tegra K1 dual-core processor clocked at 2.3GHz, coupled with 2GB of RAM and either 16GB or 32GB of internal storage with no room for expansion.  All of these specs are comparable to the iPad Air 2, except it does offer a 64GB and 128GB option if you dare spend that much money.

The cameras in both devices are an 8MP variety – the Nexus 9 uses an auto-focus and throws in an LED flash…something that the iPad Air 2 does not have, although Apple has done a lot to upgrade from 5MP to 8MP and customize their iSight camera.  The Nexus 9 also has a slightly larger 1.6MP front-facing camera (FFC) than the iPad Air 2’s 1.2MP for social media selfies and video chatting, or FaceTime, as they call their proprietary chatting.

Other items of interest – the Nexus 9 has a 6700mAh battery and it does not do too bad a job if you are not playing games – the Apple iPad Air 2 has a larger 7340mAh Battery.  The Nexus 9 has the usual microUSB 2.0 port for charging and data transfer (not the proprietary connector that Apple uses to charge their devices), universal NFC capability versus the Apple Pay proprietary system, and of course, Android 5.0 Lollipop operating system.  The Nexus 9 is priced a $100 cheaper than the Apple iPad Air 2 in any configurations that they share – $399 for a 16GB Wi-Fi versus $500 for a 16GB Wi-Fi for the iPad Air 2. 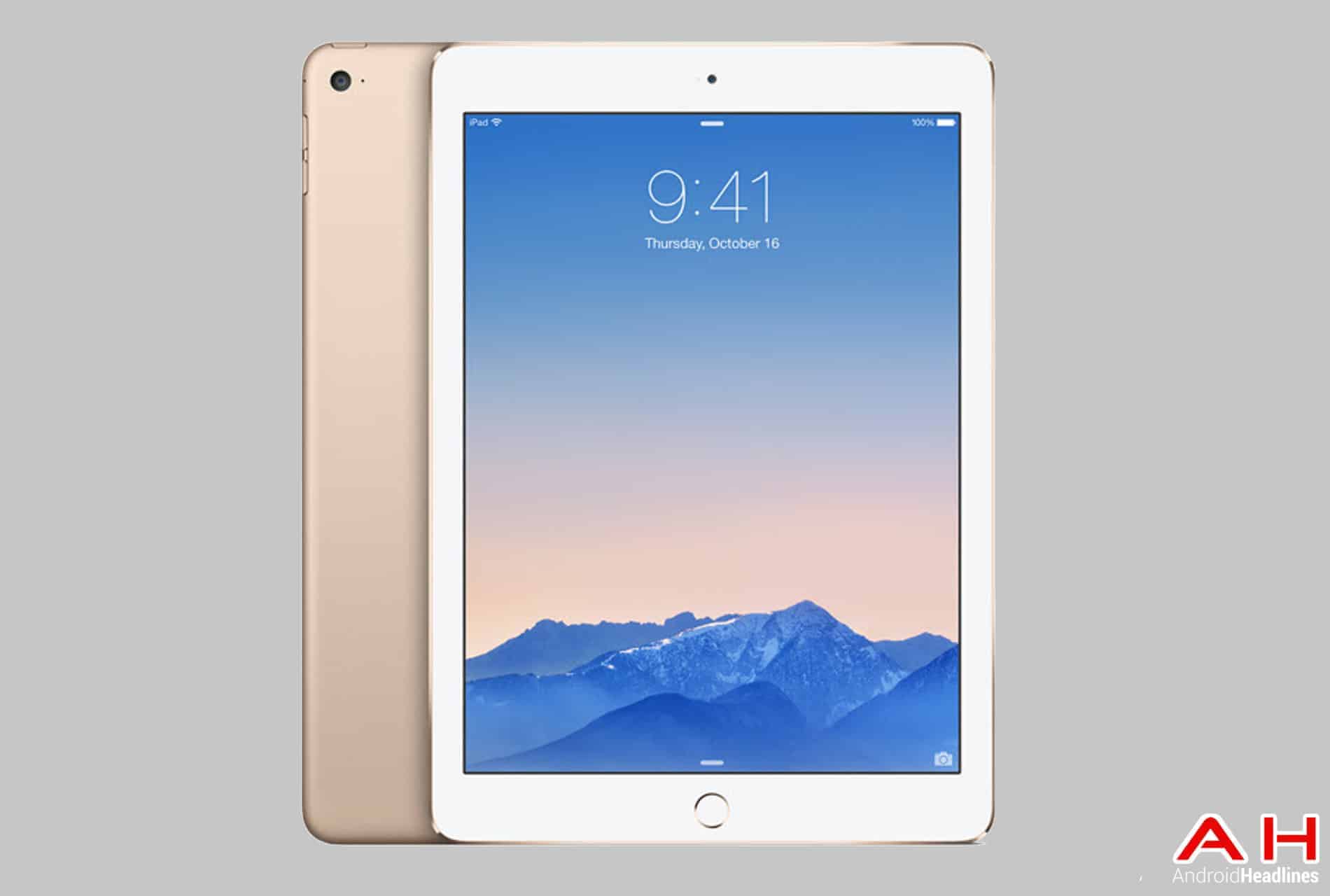 The Apple iPad Air 2 is a great tablet – yes, it is really a tablet – that is even thinner at only 6.1mm and looks terrific with its all-metal body in three colors and its anti-reflective display.  The iPad Air 2 is a premium looking device no matter how you look at it or hold it…the bezels are a bit large, but other than that, you cannot find much fault with its design.

The Apple iPad Air 2 sports a 9.7-inch QXGA IPS LCD display with a resolution of 2048 x 1536 and 264 PPI – slightly less than the Nexus 9 due to the iPad’s slightly larger display size.  Apple uses its A8X 64-bit Tri-core processor clocked at 1.5GHz coupled with 2GB of RAM and either 16GB, 64GB or 128GB of internal storage with no room for expansion.  The Apple processor may win out a little over the Nvidia in the Nexus 9…but that point could be argued.  The Nexus 9 only goes up to 32GB of internal storage as Google wants you to use the cloud for data storage.

We have talked about the cameras a bit – Apple increased the iPad Air 2’s camera from 5 – 8MP with auto-focus, the same size as the Nexus 9, which also adds an LED flash.  The FFC is only 1.2MP versus the 1.6MP on the Nexus 9 – not much of a difference, as it is used only for social media selfies and video chatting or FaceTime, as Apple calls their proprietary chat.  The iPad Air 2 also has the larger battery – 7340mAh versus 6700mAh of the Nexus 9.

Other areas of interest – the iPad Air 2 has a regular USB 2.0 port, and rather than incorporating the universal NFC that all other manufacturers have adopted, Apple uses Apple Pay, another proprietary system.  The aluminum body is nicer looking, although the speakers get pushed to the edge rather than ‘in-your-face.’  It does have a nice Anti-reflective display and sports Apple’s infamous Touch ID fingerprint scanner.  Because it is an Apple mobile device, it uses their new iOS 8.1, which you either love or hate – I personally dislike it – it is too ‘closed minded’ for me – but I have recommended it to a couple of my neighbors.  Its pricing, as with all Apple products, is premium and about $100 more than the Nexus 9 in a comparable configuration. 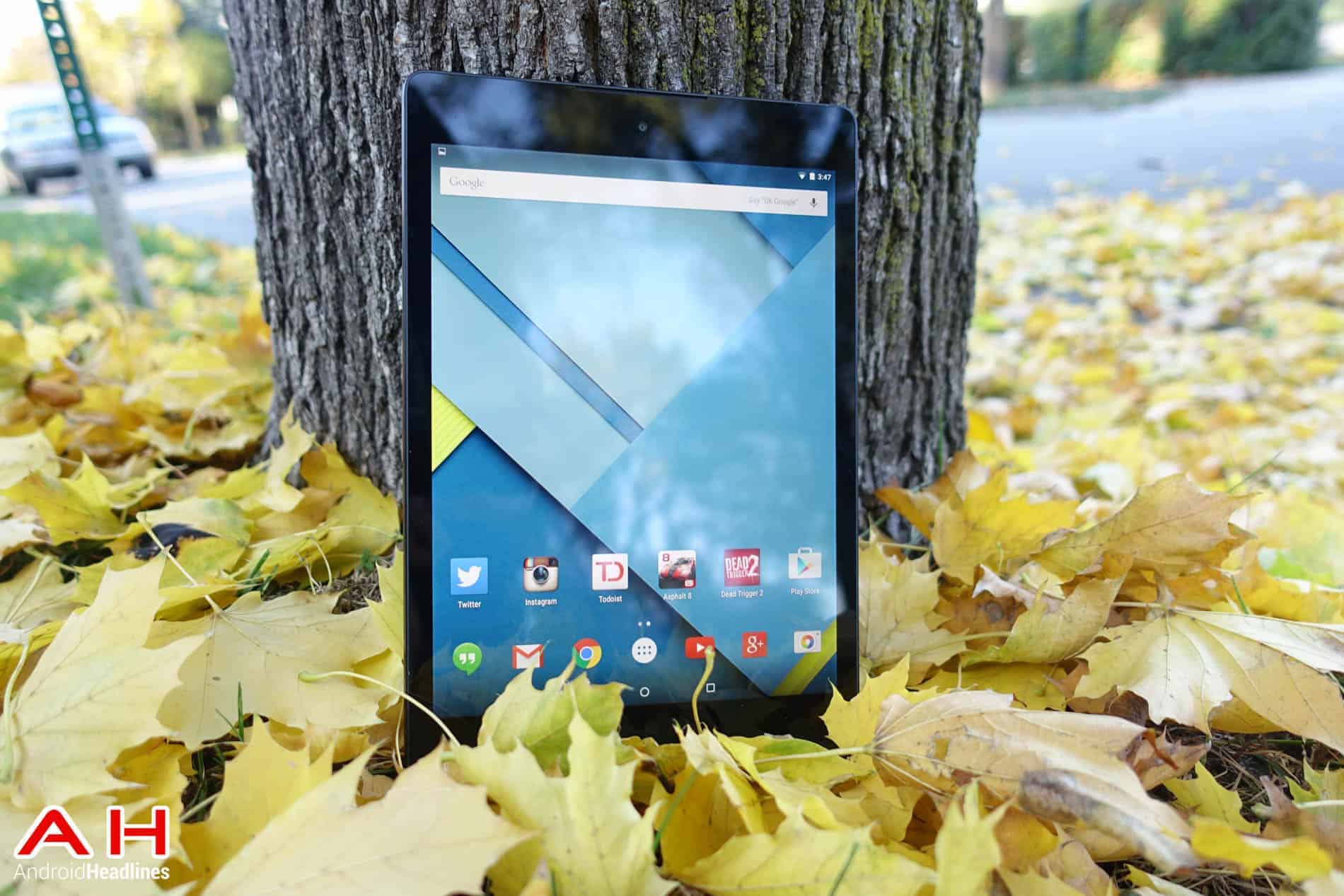 Okay, I know that I will get a lot of flak that I am Android prejudice, and I am, very much so, otherwise I would be writing for an Apple site – DUH!  This selection is not to put down the iPad Air 2 by any means – even I can see and openly admit that it is the prettier of the two devices, well-built, Touch ID is beautifully implemented and it is thin and comfortable to hold.  That being said, the displays are the same resolution, both have great processors, both have 2GB of RAM, neither one has expansion room for internal storage, both have 8MP main cameras (Nexus 9 even gives you a flash), both offer dual speakers (Nexus are front-facing) and both come in three colors.

So you ask why do I pick the Nexus 9 over the infamous iPad Air 2?  I will give you three reasons – first off it is running Android 5.0 Lollipop and I simply like Android’s freedom to customize, multitask, use widgets, etc.  Secondly, you may have read several “proprietary” things that Apple does and I do not want to be forced to buy into that Apple ecosystem….thirdly, the pricing – the Nexus 9 is $100 cheaper in any size or configuration.  If you are already tied into Apple’s ecosystem then you would certainly want the iPad Air 2…of course you probably would not be trolling Android Headlines either…although we always welcome Apple users to see what they are missing! The new Nexus 9 will do me quite well and I can sit in Starbucks like Dave and spend that $100 I saved on cappuccinos.

Please hit us up on our Google+ Plus page and let us know which tablet you would pick in this comparison – the Nexus 9 or the Apple iPad Air 2 – as always, we would love to hear from you.