Skip to content
Trusted By Millions
Independent, Expert Android News You Can Trust, Since 2010
Publishing More Android Than Anyone Else
20
Today
20
This Week
473
This Month
5616
This Year
115620
All Time T-Mobile has been on a binge with adding new subscribers pretty much for the past year. They have steadily been adding more and more subscribers as we’ve come to learn from their revealed subscriber numbers every single quarter. At the end of the third quarter for 2014, T-Mobile has revealed that they added an additional 2.3 million new subscribers now bringing them to a total number of about 53 million customers. That’s nearly 20 million new subscribers since their third quarter subscriber results in 2012 which were set at just over 33 million total subs. 20 million subscribers in two years. Think about that. If T-Mobile continues this trend of adding large numbers of subs consecutively they should have no trouble at all surpassing Sprint by the end of this year or by the end of the first quarter of 2015.

Sprint is currently sitting at about 55 million subscribers total, so all T-mobile has to do is end the fourth quarter with the same amount of subscribers to catch up to Sprint. If they can surpass their own third quarter numbers, then they may even be able to bump Sprint from the spot of the nation’s third largest wireless carrier by the time we enter into the first quarter of next year. It’s a large undertaking to be sure, but at the rate things have been going for T-Mobile it isn’t a goal that is completely out of reach.

Both carriers are offering some really good deals on plans and phones right now, but when it comes to compelling devices T-Mobile probably takes the cake. Both Sprint and T-Mobile also have a grouping of competitively prices rate plans, offering customers enticing data packages too. What will be interesting, even if T-Mobile does take over the number three spot of the four major U.S. carriers, is what will happen if Sprint actually decides to deploy their plan to do away with contracts and subsidy pricing on phones next year. That model for device pricing and plans has proven to be a winner for T-Mobile, and if Sprint does something similar it could greatly boost their customer subs. Time will tell of course, and perhaps the add numbers for Q1 of 2015 will end up in Sprint’s favor. 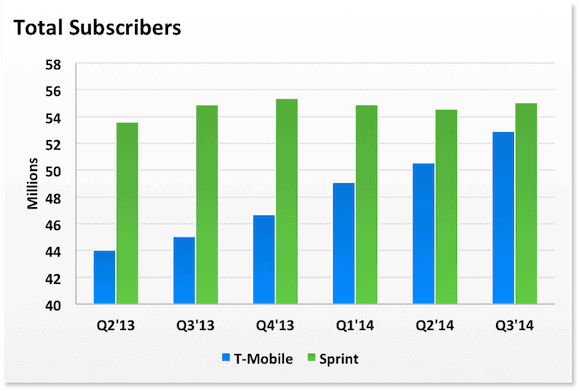