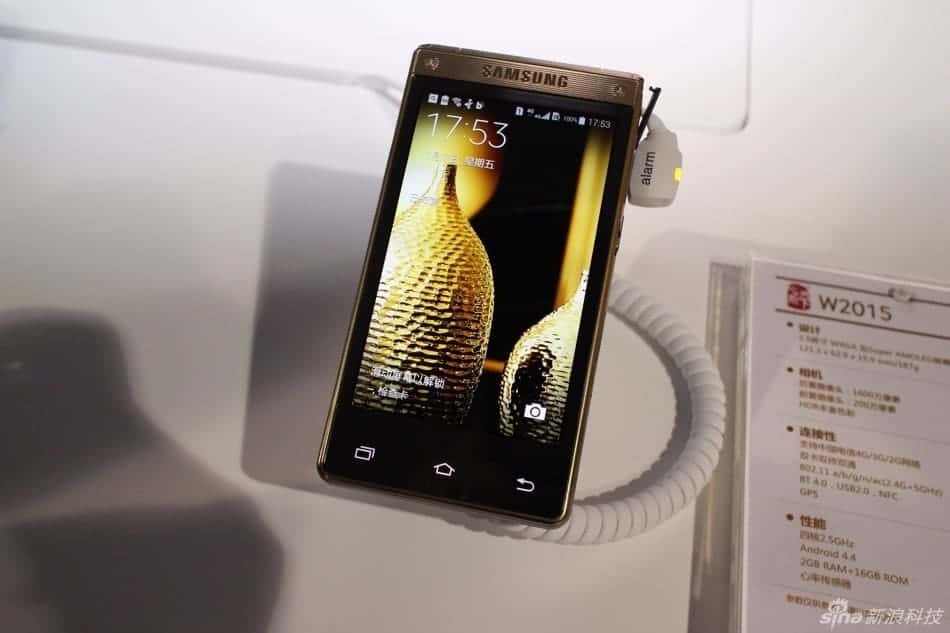 You all know by now that Samsung's profit took a dive this year. This Korean giant is still number one OEM in the world, but their competitors are getting closer and closer. Samsung seems to be looking new ways to approach the market, the company has even started using metal as their build materials which made their devices look more premium. Galaxy S6 will allegedly be a re-invented smartphone and won't be just an iterative update to the Galaxy S5. Samsung realized they have to do something in order to get back on track and prevent any more profit drops, we'll see if they'll manage to do that. This company likes to release all sorts of devices and luxury devices are also something Samsung is interested in.

The company has released  a Samsung W2015 in China, company's luxury smartphone. This handset is black and gold colored and Samsung used steel structure on the inside to make it more durable. The handset measures 121.3 x 62.9 x 5.9mm while it weighs 187 grams. Samsung W2015 is actually a foldable handset, it features two 3.9-inch 1280 x 768 displays. This handset is powered by Qualcomm's Snapdragon 801 quad-core CPU clocked at 2.5GHz and it ships with 2GB of RAM and 16GB of internal storage (expandable via MicroSD). Samsung W2015 comes sporting 2 cameras, a 16-megapixel rear-facing and a 3.7-megapixel front-facing shooters. Android 4.4.4 KitKat ships with the device with Samsung's UI on top of it, of course. NFC is also a part of this package as well and the device sports the usual array of sensors and dual SIM capability.

Samsung still didn't say what will the price of this handset be, but I'm going to get it won't be under 15,000 Yuan ($2450) considering previous models carried a similar price. If you take a look at the gallery down below you'll notice a ton of images of the device itself. I really don't see the point in releasing such a device, but I guess some people are interested in getting something like this otherwise Samsung wouldn't manufacture it. Either way, handsets like this are not meant for regular consumers like me, so I'm definitely not the best person to give my personal opinion on it.

Trusted By Millions
Independent, Expert Android News You Can Trust, Since 2010
Publishing More Android Than Anyone Else
35
Today
51
This Week
544
This Month
3056
This Year
104535
All Time
Advertisement