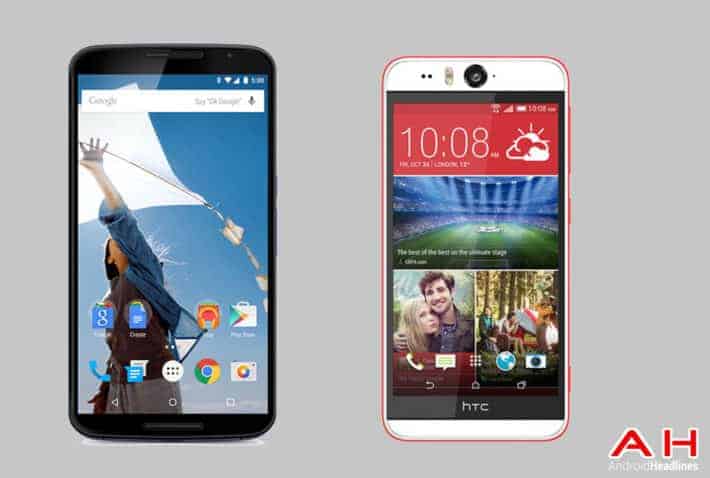 We have a good one for you today – the new Google Nexus 6 going up against the new HTC Desire Eye.  Both brand new devices and both with some interesting upgrades and features – it is almost as if Google and HTC have both gone mad.  Google has Motorola doing the Nexus 6 this time around and instead of redoing their new Moto X, it turns into a very large and high-end device, almost twice the price as the Nexus 5…it's ludicrous!  HTC comes out with a new device that really fits in nowhere – they call it a part of their Desire line-up, but it is clearly more towards their HTC One M8 in terms of specifications.  They not only move away from their UltraPixels to Megapixels, but they put a 13MP as the main camera AND the front-facing camera (FFC)…it's anarchy I tell you.  This should be an interesting comparison and one I am looking forward to reporting.

These two devices are somewhat similar, although the HTC Desire Eye is lesser in most categories.  It is slightly smaller is size and weight and they both have a main camera that is 13MP with auto-focus and dual tone LED flashes, although the Nexus 6 also adds in the very important OIS.  They both have the usual Wi-Fi, NFC, Bluetooth 4.0 (Nexus 6 has BT 4.1) and both have a microUSB port for charging and data transfer.  They both carry a pair of front-facing stereo speakers, although HTC threw in their BoomSound.  The Nexus 6 has a nano-coating for dust and water resistance and the Desire Eye has an IPX7 waterproof rating – a nice feature and something they share.  Because they both use a Qualcomm processor from the 800 series – albeit different models – both devices can take advantage of Qualcomm's 'Quick Charge 2.0' and faster charging times.

Please take a look at the detailed specifications below to see where these two devices differ and then we will look at each one individually and list their pros and cons to see if we can determine a winner in this comparison. 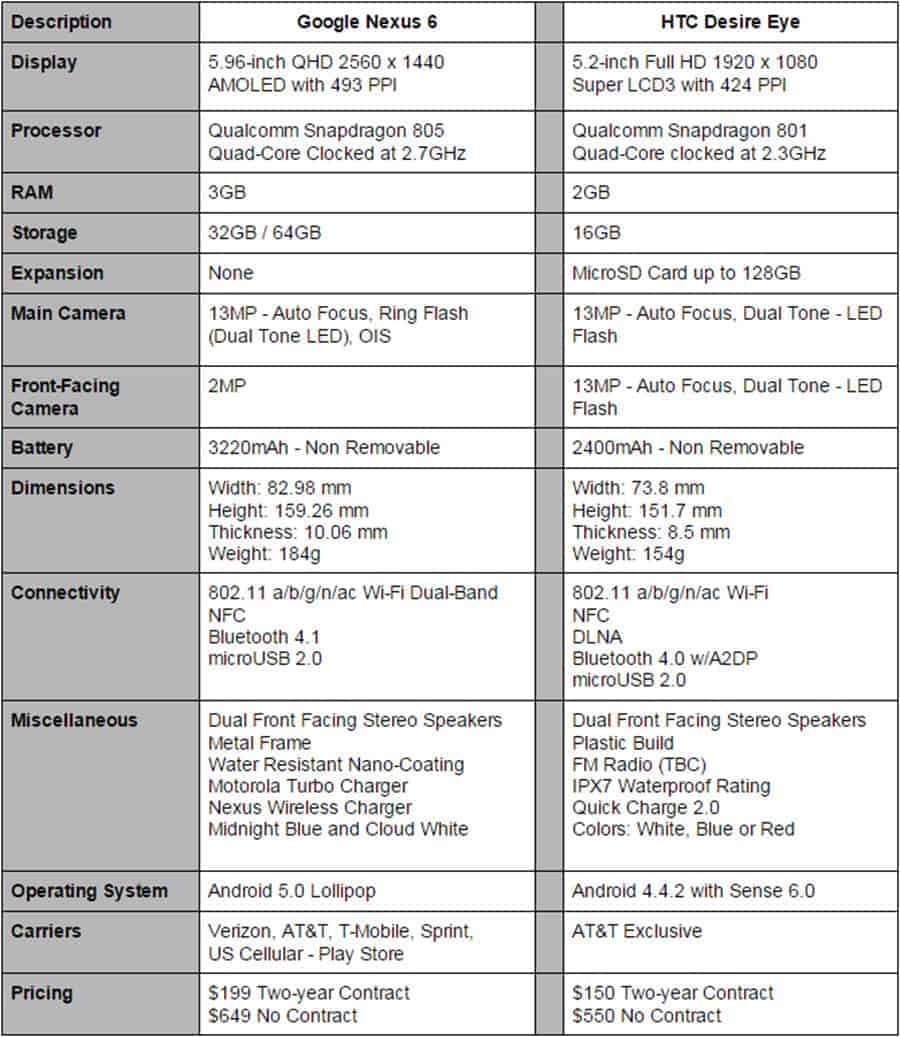 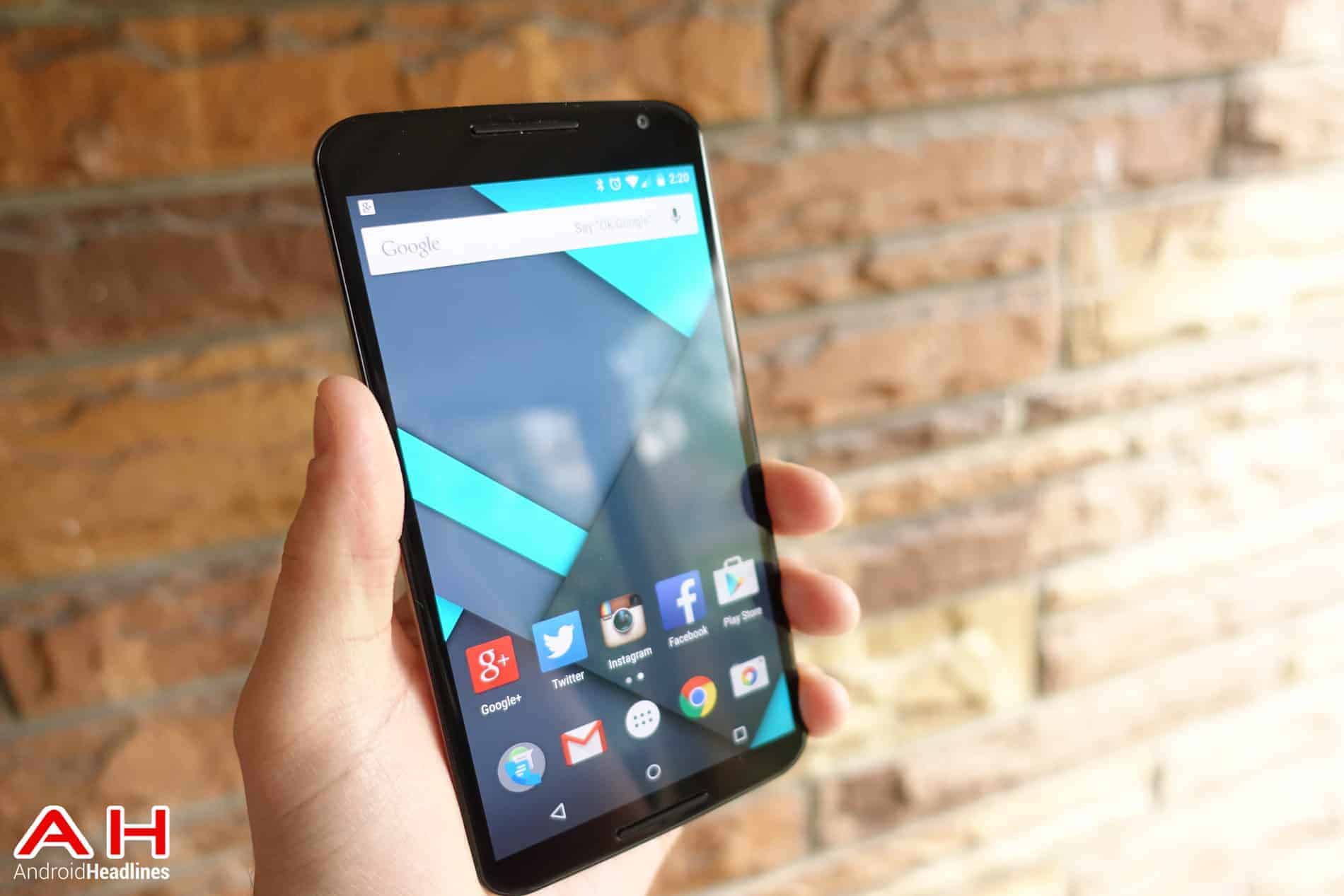 The new Nexus 6 is a huge upgrade over last year's Nexus 5, but that is not necessarily a good thing, as it upset many loyal Nexus followers.  The size jumped up to a full 6-inch display and the specifications jumped to the top of the heap as well – oh, and did I mention, so did the price.  There is no denying a great built quality and look with its metal frame and edging that encompasses the outside edge and connects the glass to a dull and curved backing that make it very easy to hold.

The Nexus 6 comes to us with a 6-inch AMOLED Quad HD (QHD) display with a resolution of 2560 x 1440 pixels and 493 pixels-per-inch (PPI) compared to the Desire Eye's smaller (not necessarily a bad thing) Full HD display at only 1080p and 424 PPI.  They both use a Qualcomm Snapdragon processor, however, the Nexus 6 uses the newest 805 clocked at 2.7GHz versus the older 801 model clocked at 2.3GHz.  The Nexus 6 comes with 3GB of RAM versus 2GB in the Desire Eye and offers up either 32GB or 64GB of internal storage with no expansion available.  The Desire Eye only starts out with 16GBs, but allows for expansion up to an additional 128GB via a microSD card.

The camera area is where these two devices really differ and because the HTC Desire Eye is so unconventional, I will describe it in detail under its points of interest.  The main cameras are fairly similar as I mentioned earlier – both 13MP with auto-focus and each has a dual-tone LED flash…the one on the Nexus 6 is rather unique in that it encompasses the lens on the device.  The Nexus 6 also has the huge advantage of OIS and you should be able to get better pictures from the Nexus 6.  The front-facing  camera (FFC) on the Nexus 6 is the conventional 2MP for social media selfies and video chatting.

The other features that make the Nexus 6 different from the HTC Desire Eye are the battery size for starters – the Nexus 6 has a huge 3220mAh battery versus the smaller 2400mAh found on the Desire Eye…both are non-removable.  The Nexus 6 also offers wireless charging capabilities and it comes with the Turbo Charger to recharge your battery 6-8 hours on only a 15-minute charger.  The Nexus 6 is also available on all major U.S. networks, US Cellular and the Google Play Store, whereas the Desire Eye is an AT&T exclusive and price wise is not much cheaper than a Nexus 6.  The Nexus 6's tour de force though is its running the newest Android 5.0 Lollipop and will always receive the latest upgrades the fastest. 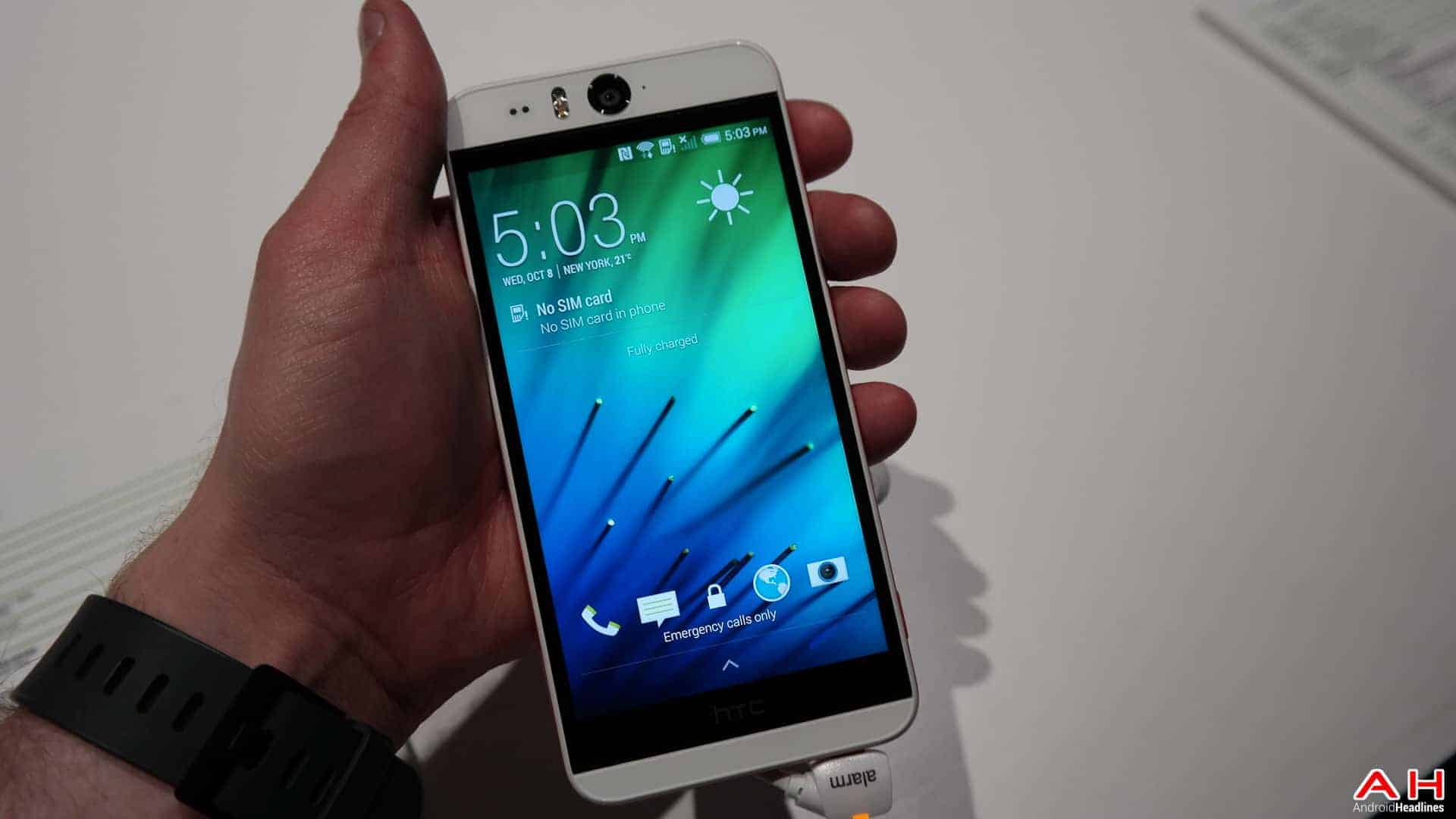 The New HTC Desire Eye is one of those devices you have to ask yourself – Why was it even made or what is its purpose.  In short, it is the ultimate selfie smartphone…but did we really need one – on the other side of the equation, it is also a nice higher end device in its own right.  It is entirely plastic with a nice 'rubbery' colored band going around the outside rounded edges and it makes for a nice solid grip and easy to hold.

The HTC Desire Eye is very similar to their flagship, the HTC One M8 – the displays, processor, memory, speakers and size are all about the same.  This is what I mean when I questioned what HTC's purpose was for releasing the Desire Eye. The Desire Eye comes with a 5.2-inch Full HD LCD display with a resolution of 1920 x 1080 pixels and 424 PPI.  It packs a Qualcomm Snapdragon 801 quad-core processor clocked at 2.3GHz and is hooked up to 2GB of RAM and 16GB of internal storage.  It also packs a microSD card slot to expand that 16GB up an additional 128GB and it uses a non-removable 2400mAh battery for power.

Besides the plastic versus metal body, the main difference is in the camera area.  The main camera is a straightforward 13MP shooter – no UltraPixels on this device – with auto-focus and a dual LED flash.  What really makes the HTC Desire Eye different is the FFC – usually a 1.3MP – 2.5MP affair is all that the average smartphone has, but the Desire Eye also includes another 13MP camera with auto-focus and dual-LED flash.  The device can track up to four faces to make sure everybody gets a clear shot.  HTC is taking full advantage of the selfie craze in a BIG way and this works for video chatting as well.

You can enjoy the dual facing stereo speakers with BoomSound – although not quite as great sounding as the larger HTC One M8 speakers, it also has an FM Radio, IPX7 waterproof rating and quick charge.  It comes with Android 4.4 KitKat and Sense 6.0 on top and most certainly will be upgradable to the newest 5.0 Lollipop.  It is only available on AT&T's network for $150 on a two-year contract or $550 with no contract. 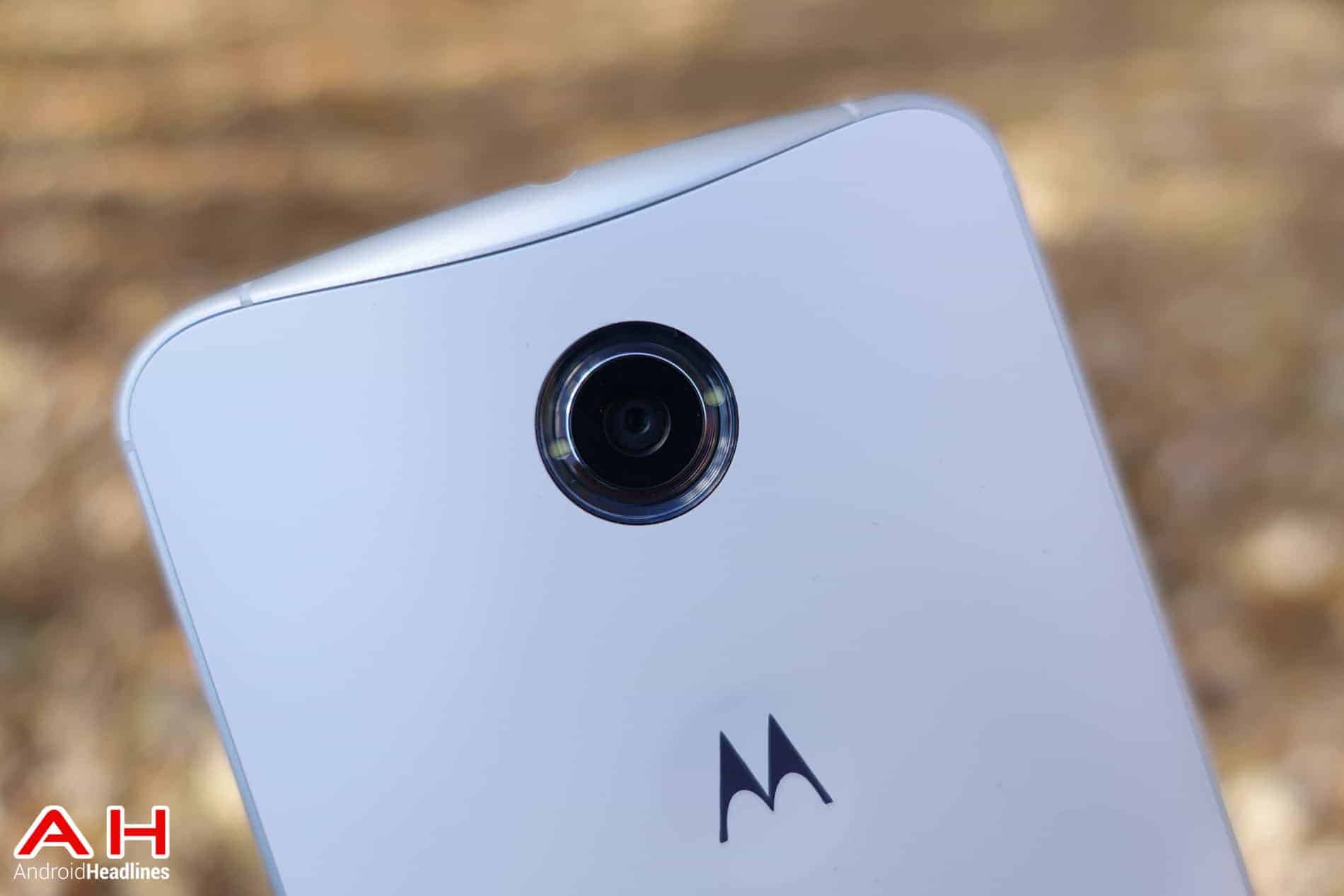 This was really a tough one, but not the way you think – the Nexus 6 wins the specification war with ease, but the value of the Desire Eye is hard to deny…$150 gets you a lot of smartphone power.  I would pick the Nexus 6, no questions asked – QHD display, faster processor, more memory, larger battery, and a larger screen (yes, I like BIG screens).  However, if you like to take selfies of yourself and friends or do a lot of video chatting, then you may be perfectly happy, or even happier with the $150 HTC Desire Eye.

The true flagship, high tech and high spec smartphone is the Nexus 6, no questions asked and my winner of this comparison, after all it comes with the latest 5.0 Lollipop and will get the fastest upgrades…but if you are more into social media, then you should be very happy with the HTC Desire Eye.  It all depends of how you 'look' at it and if you say, "cheese!"  Please let us know on our Google+ Page which one of these devices you think is the winner and WHY…as always, we would love to hear from you.