Skip to content
Trusted By Millions
Independent, Expert Android News You Can Trust, Since 2010
Publishing More Android Than Anyone Else
13
Today
113
This Week
801
This Month
6517
This Year
116488
All Time Boy do we have a good one for you today – the brand new Motorola Droid Turbo going up against the brand new Samsung Galaxy Note 4. Both of these powerhouse devices are from two of the top competitors in the smartphone industry.  Both devices have a solid build, are nice looking and easy to hold, however, the Galaxy Note 4 is definitely a more premium looking and feeling device.  It has a full metal frame and metal trim that wraps around the device with a curved and sculptured look at each of the four corners with a soft, faux leather backing that offers a good grip and a nice look.  The Droid Turbo has Kevlar built into its rather shiny and smooth case and backing – it offers a solid build but can be a fingerprint magnet and slippery.  One model does have a more ballistic nylon look and feel…definitely a masculine approach to the Droid’s design.

For as different as these devices are, they really have a lot in common…or at least close to common.  They both use the AMOLED screen technology and they both sport a Quad HD (QHD) display.  They both also use the same processor in the U.S. – the Qualcomm 805 quad-core clocked at 2.7GHz, both are paired with 3GB of RAM, and both offer a 32GB model.  The Droid Turbo also has a 64GB model, but the Galaxy Note 4 offers a microSD card slot to add an additional 128GB of storage.

They both also have the usual Wi-Fi, NFC, Bluetooth 4.0 and a microUSB 2.0 port for charging and data transfer.  Both devices will offer VoLTE calling once the Droid Turbo receives an OTA update.  They both are currently running Android 4.4.4 KitKat and should be receiving their 5.0 Lollipop update soon…hopefully by the end of the year.  You can pick up both devices on Verizon and the Droid Turbo is very attractively priced at $199 on a two-year contract, whereas the Galaxy Note 4 is also available on all networks and goes for $299 with a two-year agreement.

Please take a look at the detailed specification sheet below and you can see where these two devices are the same and differ – then we will look at each device on its own merits and see if we can pick out a winner for this comparison. 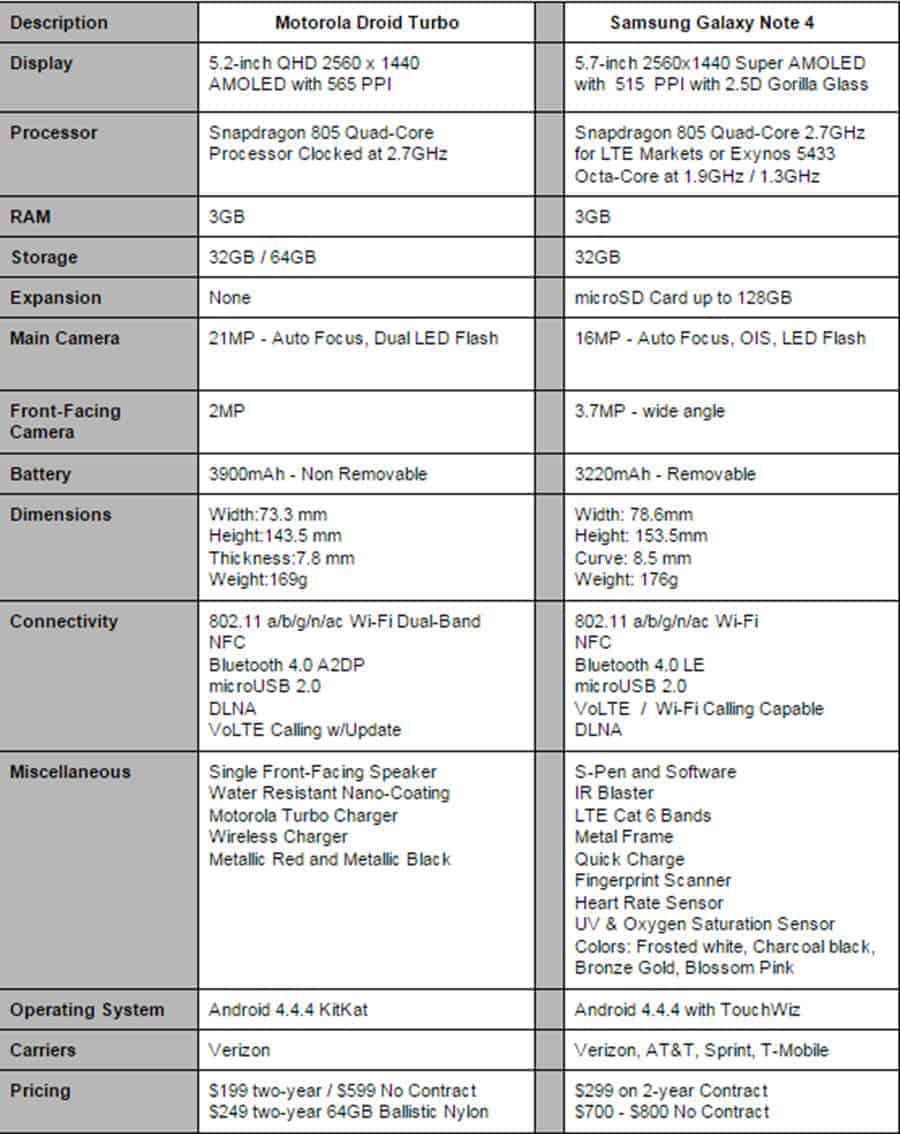 The Motorola Droid Turbo is another example of Moto going wild and building a real high-end device, although one does have to wonder why they would include a huge 21MP camera, but leave out OIS or have no room for the expansion of internal memory.  The Droid Turbo, made exclusively for Verizon’s Droid line up – in fact, the new Droid Turbo may be the only smartphone to carry on the Droid name tag this year.  It is distinctly ‘Droid’ looking – the same ‘chin’ on the front and the same Kevlar strengthened back, although they did give us a new Ballistic Nylon style backing this year, so depending on your memory options, you could get a shiny red or black back or the material looking back in black only.  As always in a Motorola build, it offers a strong, solid and a good grip for your hand.

The new Droid Turbo comes with a 5.2-inch Quad HD (QHD) AMOLED display with a resolution of 2560 x 1440 pixels and an unheard of 565 pixels-per-inch (PPI).  This goes up against the highly rated 5.7-inch Super AMOLED QHD display found on the Samsung Galaxy Note 4.  The Droid Turbo also has the same processor as the U.S. sold Galaxy Note 4 – a Qualcomm Snapdragon 805 quad-core clocked at 2.7GHz and both devices have a robust 3GB of RAM.  The Droid Turbo offers internal storage of 32GB or 64GB with no room for expansion, whereas the Galaxy Note 4 only offers a 32GB model, but also has a microSD card slot to add up to 128GB of additional storage.  The Droid Turbo took a cue from the Droid Maxx and includes a huge 3900mAh battery versus the smaller 3220mAh found in the Galaxy Note 4.

The camera was really upped in the Droid Turbo from previous Droid models and this is an area that is interesting to compare.  The Turbo uses a 21MP sensor for its main shooter, along with auto-focus and a dual-LED flash.  This is up against the Galaxy Note 4’s 16MP sensor, auto-focus, single LED flash, but with add ISOCELL technology for lower light situations and Optical Image Stabilization (OIS).  The Droid Turbo uses a 2MP for its front-facing camera (FFC) and here the Galaxy Note 4 will definitely win out with its 3.7MP wide-angle lens for larger group selfies and conference room video chats.

Beside those usual items we went over in the introduction, the Droid Turbo does have VoLTE capabilities with a software upgrade that will come out next year, but it does not offer the Wi-Fi calling option like the Galaxy Note 4.  It does have a front facing speaker, which is always a plus over the back mounted one found on the Note 4.  It also has a nano-coating for resistance to water, wireless charging built-in and it comes with the Motorola Turbo Charger already in the box, whereas you will have to buy a similar charger for the Note 4.  For the time being, it is running the same Android 4.4.4 KitKat that the Note 4 enjoys.  It is limited only to Verizon’s network, but at a very attractive price of $199 on a two-year for 32GB and $249 for the 64GB model.  The 32GB is $599 off-contract versus the $700-$800 range of the Note 4. 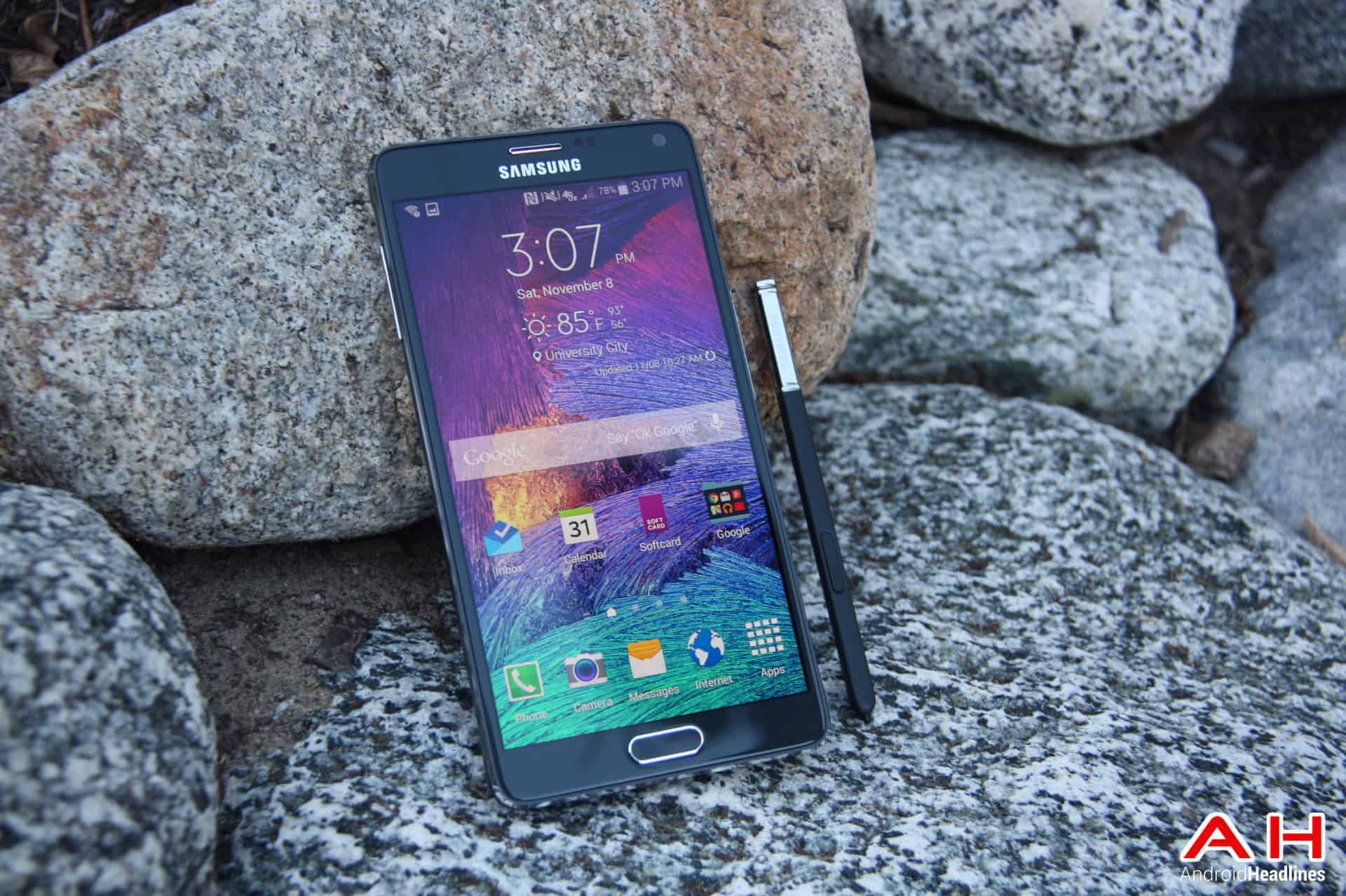 The Samsung Galaxy Note 4 was one of the most highly anticipated devices this year, especially after the disappointing sales of the Galaxy S5.  Armed with its full metal frame, metal trim and faux leather backing (sans the fake stitching) it looked like a true premium device ready to be accepted and loved by millions…and so far, it looks as though it is a hit.

The new Galaxy Note 4 comes with the same size display as its predecessor, the Note 3, at 5.7-inches, but this year they upped the display to a QHD with a resolution of 2580 x 1440 pixels and 515 PPI – it also has 2.5D Gorilla Glass 3 to help with glaring and viewing angles.  The Droid Turbo does have 565 PPI due to its smaller size, but Samsung’s own Super AMOLED display is the best in the business.  The Galaxy Note 4 uses the same processor for its U.S. models as the Droid Turbo – the Snapdragon 805 quad-core clocked at 2.7GHz.  It too has 3GB of RAM and has 32GB of internal storage, but also has up to 128GB of available expansion via a microSD card.  The Galaxy Note 4 sports a 3220mAh removable battery versus the non-removable 3900mAh battery found in the Droid Turbo.

We discussed the camera in detail under the Droid Turbo, but suffice it to say that either device will give you great photos – the 16MP sensor in the Note4 along with auto-focus, LED flash, ISOCELL technology, OIS along with the ample software options is more than capable of taking excellent shots.  The 3.7MP FFC with a wide angle (120 degrees) lens will give you a terrific family selfie or a video chat at work where several people can be brought into the picture.

When it comes to extra features, the Galaxy Note 4 will easily grab this section with a win over the Droid Turbo.  Besides the usual suspects we discussed in the introduction, the Galaxy Note 4 does offer VoLTE calling and Wi-Fi Calling built into the device.  It also has an IR Blaster, is LTE Cat 6 capable, has a Fingerprint Scanner, Heart Rate Sensor and a UV and Oxygen Saturation Sensor.  It also offers the same Quick Charge 2.0 capability – this comes from the Qualcomm Snapdragon 805, not Moto or Samsung.  The other ‘Big Thing’ is the S-Pen and all of its wonderful features and software that it brings to the device, as well as many apps designed to use the S-Pen.  That being said, many users find these options very useful and others call them gimmicks – it is up to you to determine which side of the fence you stand on.  The Galaxy Note 4 is available on all major U.S. networks and costs $299 on a two-year contract or $700 – $800 off contract…about $100 more than the Droid Turbo found only on Verizon’s network. 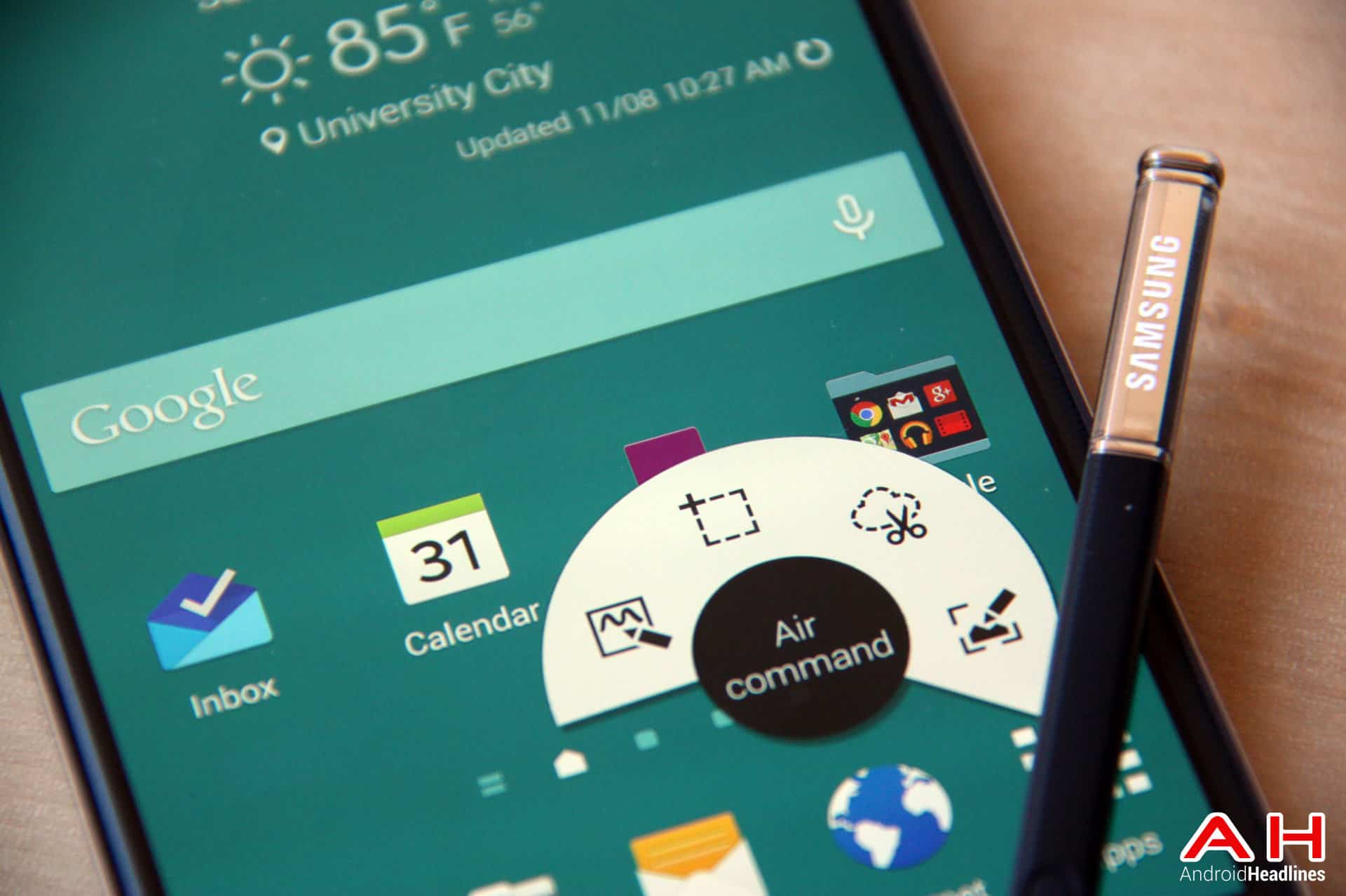 I have to tell you that this comparison is really a tie – I only put the Galaxy Note 4’s picture up because I like it better and it would be the one I would buy of the two.  There is no doubt that these two devices are very evenly spec’d in the main areas – QHD display, Qualcomm Snapdragon 805, 3GB of RAM, good cameras, large batteries and Android 4.4.4 KitKat.  I would go further to also say that that Galaxy Note 4 is better looking and has more features – IR Blaster, Fingerprint scanner, Multi-Window, Heart Rate Sensor, UV and Oxygen Saturation Sensors and of course the S-Pen and all of its attributes and specific software.  However, one has to ask yourself if you are going to use those extra features and are they worth $100 to you?

For someone like me, a heavy S-Pen user, one who likes large displays, and thinks that the Galaxy Note 4 is a better looking device – it is the clear winner for me.  However, if you will never use those features, especially the S-Pen, and do not mind the lessor camera functions, then I would save $100 and get the Droid Turbo.  Both of these are excellent devices and you cannot go wrong with your decision – it all depends how you use your device.  Please hit us up on our Google+ Page and let us know which device you would choose and WHY…as always, we would love to hear from you.