Considering how overcrowded and competitive the marketplace is for smartphones, smartphone manufacturers really need to start thinking outside of the box if they want to set themselves apart from the competition and gain any kind of attention from consumers. Motorola has, arguably, done this better than any other manufacturer for two reasons. The first is that aside from Google's Nexus line of phones, you will not find another range of smartphones that have a more untouched and pure Android experience than the Moto X, G, or E. This came as no surprise considering that, until recently, Motorola was owned by Google but it was certainly a smart idea on their part to not be heavy handed with their software because it set them apart from the competition and, due to their more than affordable price tags, exposed many people all over the world to the joys of an unsullied Android smartphone. When buying one of Motorola's phones people knew that they were getting a phone that simply works well and does what you need it to. No muss, no fuss.

The second reason why Motorola deserves some credit for creating their own niche in today's smartphone world is their Moto Maker service. If a consumer is interested in purchasing one of Motorola's Moto X smartphones, they can log into the Moto Maker website and they will be greeted with a plethora of customization options that allows them to choose things like what sort of material their phone will be wrapped in and what colors they want for all of the smaller details, like the trim and the power and volume buttons. Motorola has not run out of ideas in terms of the customization options they plan to offer, as it has been revealed that they will soon release a Moto X that will be wrapped in leather that is designed to look and feel just like a real football. This really is a genius move on their part considering the NFL season is heating up in the U.S. and the Thanksgiving football games are just around the corner.

There is no word on carrier exclusivity for this feature but the below photo shows the Verizon version of the football leather-clad Moto X. There is also no word on release date or price at this point, but considering the other leather options on the Moto Maker site cost users an extra $25 there is no reason to expect anything different from this particular option. As stated earlier, this seems like a pretty smart move from Motorola from a marketing standpoint and one can't help but wonder what other interesting options they will offer in the future. In the meantime, football fans everywhere should be pretty happy about the latest version of the Moto X. 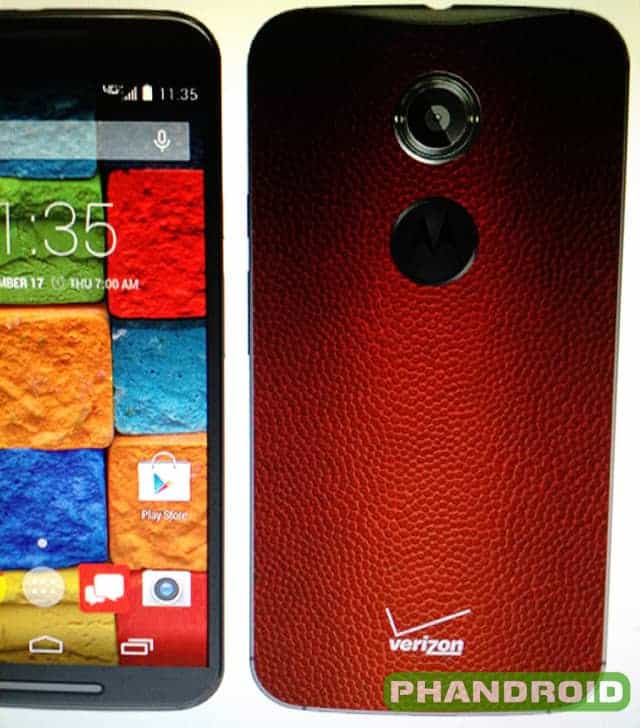