Its always interesting when a new and mysterious devices does the rumor rounds. We get a glimpse at some of the features, hardware and specs and immediately speculation and excitement runs rife. Could it be this? It must be that? Well, if like me, you love these unknown devices then here is another one for you to chew on. It seems Motorola are testing a new(ish) device which looks to be a mid-range device, with all indications pointing to either a Moto G or Moto E evolution. The information we have is taken from the Geekbench testing suite.

So what do we know? Well, in short not enough to be sure of anything but just enough to make some educated guesses. The most interesting snippet is the unknown device is running a Snapdragon MSM 8916. For those unfamiliar this is a Snapdragon 410 and the next revolution of the more popular Snapdragon 400 processors. The Snapdragon 410 processor is a 64 bit chipset, quad-core and clocks at 1.4GHz. It is the inclusion of the 410 that certainly suggests this is a mid-range aimed device. The only other notable information provided on the Geekbench results is the inclusion of 1GB RAM which again adds to the mid-level status. Interestingly, the results of the benchmark show the 410 processor clocking at 1.19GHz and the RAM peaking at 884 MB. The results also do show the device running on Android 4.4.4 which is KitKat. However with the 410 processor being one of Qualcomm’s first 64 bit chips and Android 5.0 (Lollipop) the first Android system optimised for 64 bit architecture. It does suggest that this device is being readied for Lollipop. Whether or not the device will come preloaded with Lollipop will probably depend on its release date. Either way though it will be capable and Lollipop ready on launch.

So the fun bit begins. What is the device? Well, currently we don’t even have a codename to report on with the device simply being referenced as Motorola TBD. That said, due to its mid-rage nature most would assume this to be a Moto G or Moto E next generation. As the Moto G (next gen) has already been released it would seem more likely that this might be a Moto E. It is worth remembering though, with the inclusion of a Snapdragon 410 processor (which is highly geared towards LTE), this could easily be a Moto G LTE variant. As such there is no clear indication yet as to whether it is a G or an E or a completely new device. Either way, boys and girls it does seem to be on its way. So what do you think it will be? G? E? something new? Let us know your predictions. 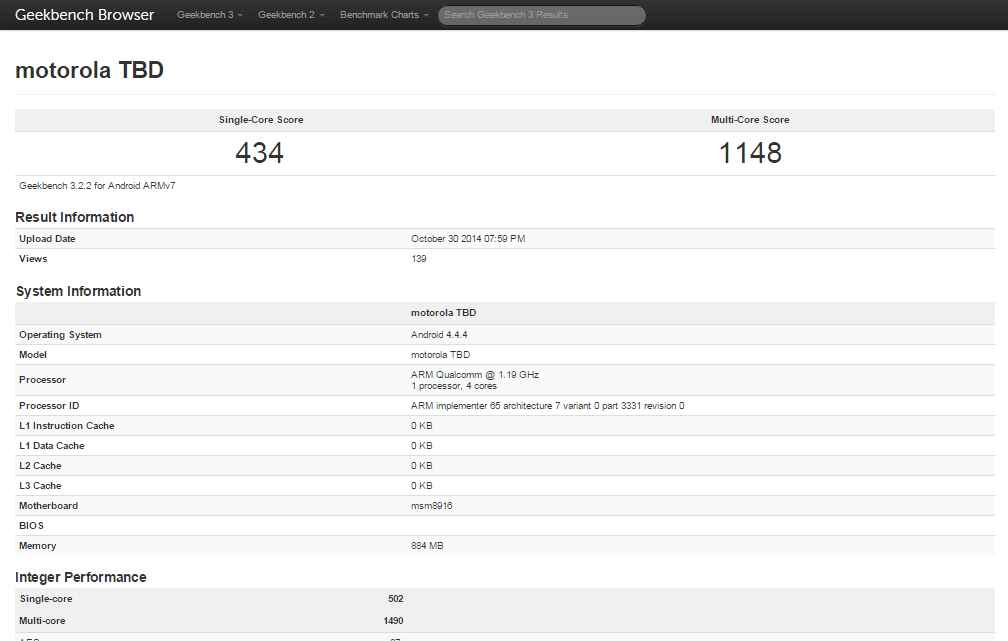