Meizu’s MX4 flagship smartphone is this company’s pride and joy. This handset was launched back in September and Meizu has sold tons of these units thus far, all over the world. The demand for the handset has surprised the manufacturer itself and Meizu had some issues meeting the demand, but luckily they were able to resolve any issues rather fast. Meizu has since announced 2 additional versions of the device, Meizu MX4 Gold and Silverwing editions and Meizu MX4 Pro is going to launch this month. I’d say things are going great for this Chinese manufacturer. The company even decided to discount their last year’s flagship handset, Meizu MX3, which is still pretty much a powerful piece of technology.

On November 11th Meizu will hold a sale and will offer Meizu MX3 for 1299 Yuan ($212), the company will have 200 000 units ready to go. That’s not all though, Meizu also set aside 10 000 units of both Meizu MX4 Gold and Silverwing editions to sell, which will be sold at a regular 1799 Yuan ($294) price on the same day. Meizu MX3 features a 5.1-inch (1800 x 1080) display along with 2GB of RAM and 16, 32, 64 or 128GB of non-expandable internal storage, depending on which model you choose to get of course. This phone is powered by Exynos 5 Octa 5410 octa-core processor (quad-core 1.6 GHz Cortex-A15 & quad-core 1.2 GHz Cortex-A7) which comes with PowerVR SGX544MP3 GPU for graphics processing. On the back of this device you’ll find an 8-megapixel camera with an LED flash located below it, while there’s a 2-megapixel shooter on the front of the phone. The device ships with a non-removable 2400mAh battery and Android 4.2 JellyBean with Meizu’s Flyme 3.0 on top of it though Meizu did recently say it will push the latest version of Fylme (powered by YunOS) to this handset soon. 139 x 71.9 x 9.1mm are the device’s measurements while it weighs 143 grams.

For those of you who live in China and are interested in Meizu’s devices, you might want to stop by Meizu’s official webpage on November 11 and see what the company has to offer, who knows, you might end up picking up a fresh new Meizu MX4 or a discounted MX3 in the process. 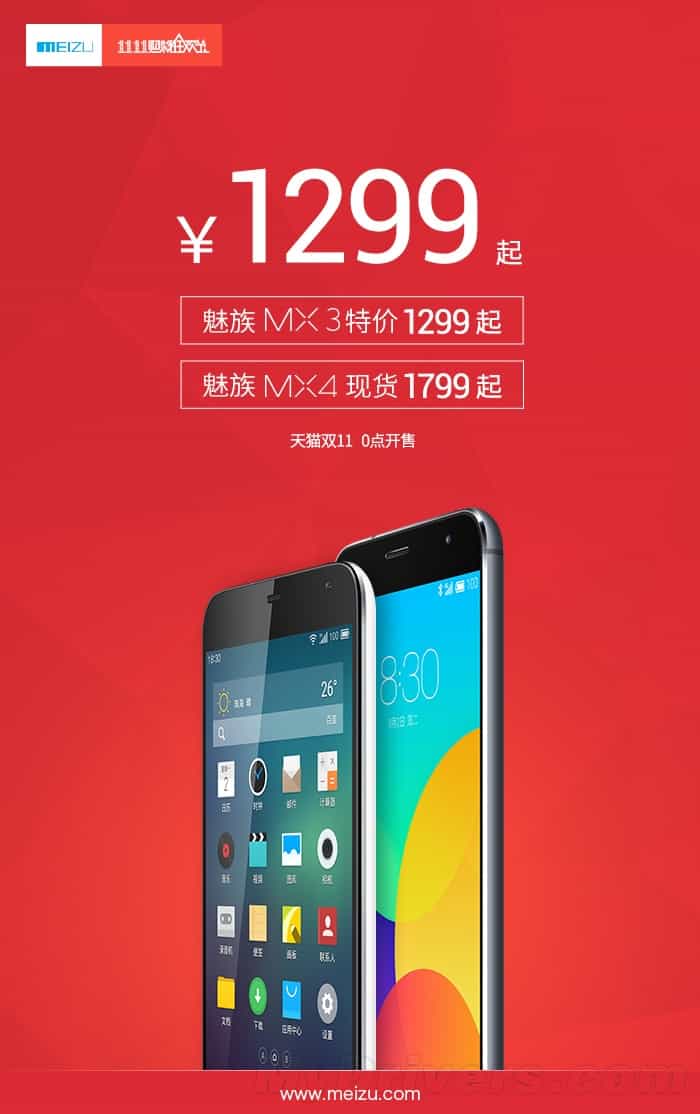