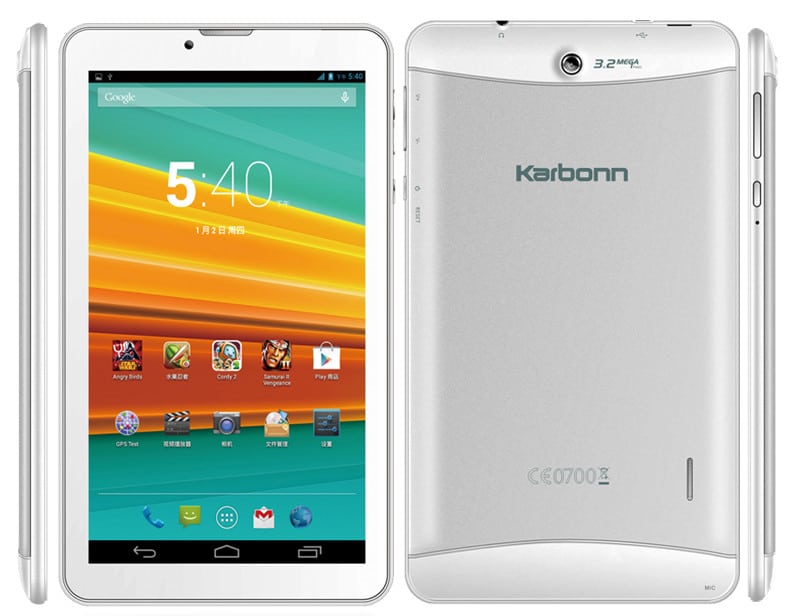 Karbonn, an Indian smartphone manufacturer, was one of Google's Android One partners, just like Spice and Micromax. Karbonn released one of 3 currently available Android One devices back in September, Karbonn Sparkle V. The Android One device launch sure did bring Karbonn under the spotlight and gave it some positive exposure, though people in India actually know this company really well. You can check our full review of Karbonn Sparkle V by clicking here. This India manufacturer also released Karbonn Titanium S10 and S20 devices in September, both of which are mid-range handsets.

This time around Karbonn decided to release a tablet and change things up a bit. Karbon ST72 is a low-end tablet I'd say, it sports only 512MB of RAM and is priced accordingly. Anyhow, this tablet features a 7-inch 1024 x 600 display along with the aforementioned 512MB of RAM and 4GB of internal storage (expandable via MicroSD card up to 32GB). This device is powered by a 1.3GHz dual-core processor, probably a MediaTek chip, though the listing doesn't reveal the manufacturer. On the back of this device, you'll find a 3.2-megapixel camera while there's a VGA shooter located up front. Android 4.4.2 KitKat ships with this handset as well as a 2800mAh battery. 3.5mm audio jack, FM Radio, Bluetooth, GPS, 3G and Wi-Fi 802.11 b/g/n are all included. This tablet measures 184.5 x 100 x 8.9mm and weighs 290 grams. Dual-SIM support is also here.

Karbonn ST72 is available in White, Black and Grey color options and is priced at INR 6,800 ($110), you can get it via Snapdeal if you live in India, just follow the source link below. This is a low-end tablet and such is its price, you can't exactly expect much for INR 6,800 ($110), now can you? I do believe there are far better offers out there though, perhaps not at such a low price, but if you're looking for a solid tablet, a better option is to save up some cash and actually buy something a bit more powerful than this, 512MB of RAM is the main issue here, in my humble opinion. That being said, this is not a bad deal if you're willing to get a device with such a humble spec sheet.