A few days ago, Tom reported that HTC Sense 7 might adopt a look and feel not too dissimilar from stock Android 5.0 Lollipop's Material Design. As Tom said at the time, this would not be a surprise as Google is certainly encouraging manufacturers to tone down their own skins and adopt a more stock Android look and feel. We've now seen a Tweet from Upleaks that simply says, "1, Android 5.0 update for M8 will be released with Sense 6. 2, They haven't started porting Sense 7 software to M8 yet." And I'm not quite sure what to make of this, actually.

On the one hand, I follow through the logic that HTC will move their devices closer to the stock Android Lollipop look and feel. This is partially because if they don't, third party applications will look out of place, but also partially because Material Design looks great. I also expect HTC to retain Sense's own look and feel and so we'll have a design that sits between the old interface and the new one. It's going to be harder for the original equipment manufacturers to offer more (useful) features over and above the stock interface but I don't think HTC are ready to condemn Sense to simply a widget pack (here's looking at their iconic clock and weather widget that adorns my M8's homescreen) and the ability to increase the ringer when the device is somewhere dark. Over the years, I've gone from disliking Sense, to tolerating it and now to enjoying certain it as it adds more to my device than it takes away.

Where it doesn't necessarily make sense to me is if HTC are to release Sense 6 on a device running Android Lollipop, they'll be retaining their current design style and this will start to look out of place as more and more third party applications will orientate towards Material Design. Perhaps we'll see an interim update to Sense, say, 6.5 with no new features but an interface closer to Material Design? This may well tie in with a January release of Android Lollipop for the HTC One M7, M8 and similar products. We'll then see the next HTC flagship device release a little later in the year running the next version of Sense, with the M7, M8 et al updated shortly after. 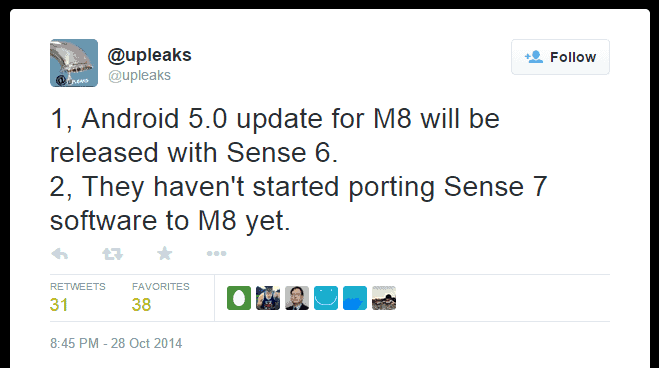