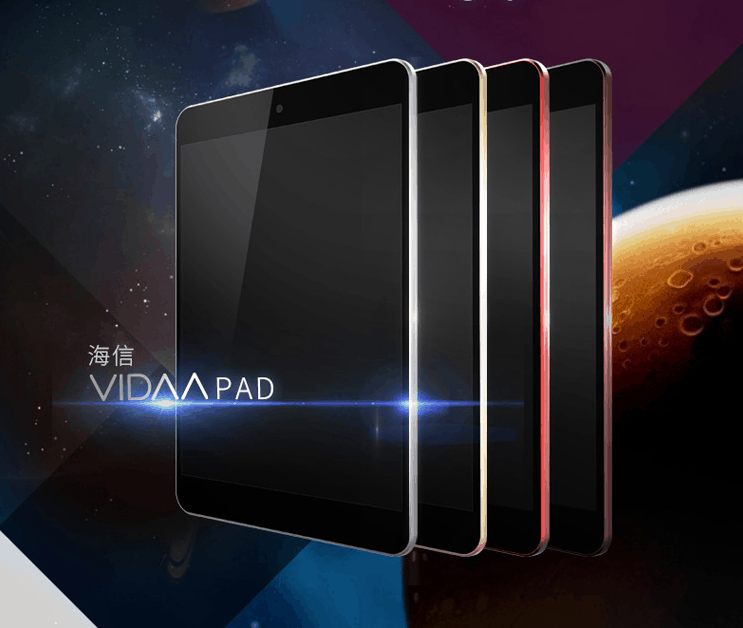 We're not seeing many tablets being announced lately, which is actually kind of expected considering the tablet market is (surprisingly) shrinking. Anyhow, Hisense is here to show us their new product though. In case you don't know who Hisense is, this is an electronics manufacturer from China which usually releases quality affordable devices along with home appliances and what not. Hisense is a well-known brand in China and other parts of Asia as this company makes affordable and yet rather solid TV-sets, though they dabble in other home appliances as well. Hisense has just announced their new tablet offering and it is already available for pre-order, so let's check out what's what.

The VIDAA PAD is the slimmest Android tablet in the world at the moment, this device is only 6.35mm thick. VIDAA PAD features a 7.85-inch 2048 x 1536 IPS Retina display along with 2GB of RAM for your multitasking needs and 16GB of internal storage. This tablet is powered by Rockchip RK3288 quad-core processor clocked at 1.8GHz which comes with ARM Mali-764 GPU for graphics rendering. On the back of this device, you'll find an 8-megapixel camera and the device ships with a 4,400mAh Li-Po battery. Android 4.4.4 comes pre-installed on this tablet while Wi-Fi and Bluetooth 4.0 are also available as far as connectivity goes. VIDAA PAD measures 200.3 x 135.6 x 6.35mm while it weighs 320 grams. Another thing worth mentioning here is that VIDAA PAD is made out of Aluminum and it sports a unibody design.

Hisense VIDAA PAD is surprisingly well-specced device and it is available for pre-order via Jingdong Mall in China for 999 Yuan ($163). You get 2GB of RAM, really high-def IPS Retina display, aluminum construction and a the slimmest form factor in the world for this price. Hisense might not be the most known brand out there, but I'd argue this is good value for Chinese consumers. This tablet might be available worldwide via resellers in due time, though expect a higher price point if that happens, of course. Is anyone interested in this tablet by Hisense? Would you consider getting a device like this considering the price and everything?