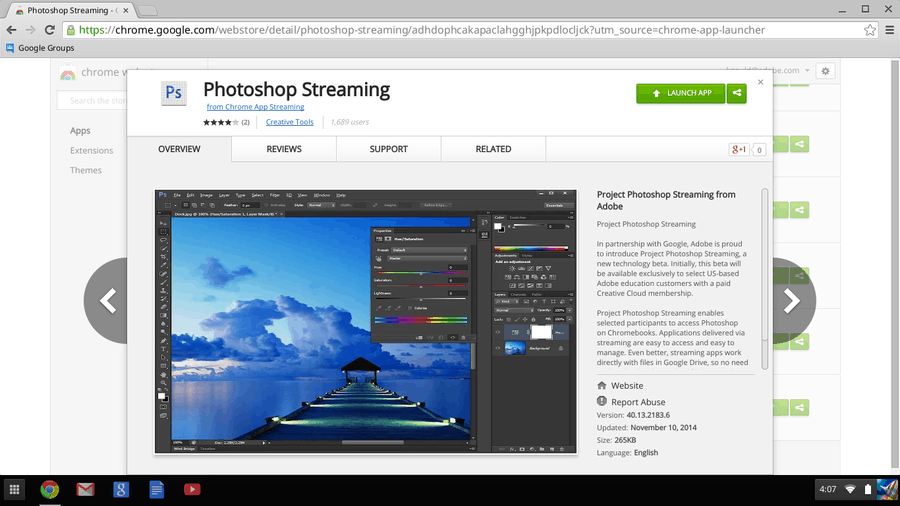 ChromeOS is a wonderful system. There are plenty of things that it can do that just about any person can find useful for a day to day set of operations. With that being said, there are still some things that ChromeOS is lacking, and one of those things is powerful photo editing tools like Adobe Photoshop. Having been in a project phase for the better part of two years, Google and Adobe have been working to bring the program and software to ChromeOS. Today they have made it possible to use Photoshop from a ChromeOS device with a piece of software available in the Chrome web store called Photoshop Streaming.

The issue is that for now only Educational establishments can use the software. That's because Photoshop Streaming is apparently in a trial testing phase with Education customers of ChromeOS devices for the first six months. Reportedly, the software should open up to anyone who owns a ChromeOS laptop or desktop after that time frame, at least that's the goal and obviously things could change in that time. Even as a personal ChromeOS user who doesn't have access to this software on his Chromebook, it's still amazing and awesome to know that Photoshop now runs on the operating system. It also serves as an indicator that everyone should be able to use it soon.

Essentially you can think of Photoshop Streaming as cloud based Photoshop solution. It runs as a sort of virtual machine as Adobe is basically mirroring a full version of the software from a server side setup, and then streams or displays it to the ChromeOS user, so you're not actually running Photoshop on your own system. Because Photoshop Streaming runs this way you can only use Photoshop Streaming in conjunction with Google Drive based files, but in the future the plan is to open it up to be compatible with other cloud based storage systems, like perhaps Dropbox, Box and others, although no specific mentions were made and I'm simply throwing out ideas of some of the most popular options. If you use a ChromeOS device will you be happy to see this software be made available to all users sometime in the middle of next year?