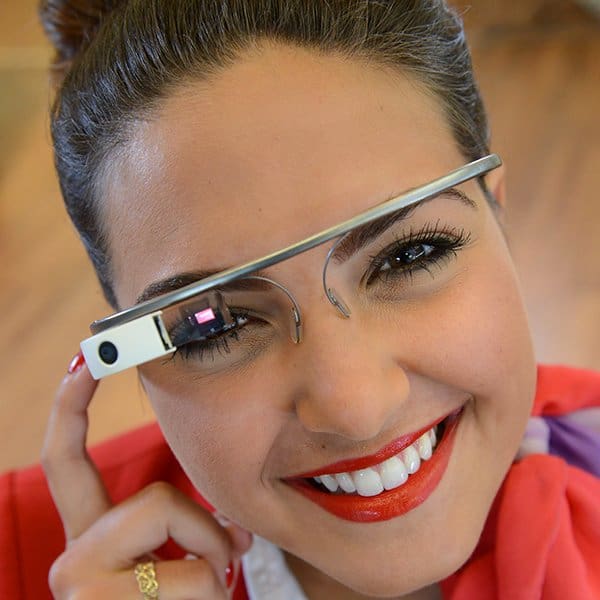 Google Glass was the first project to emerge from Google's Project X doors some two years ago. Glass is a wearable headset designed to project information in front of the right eye using an augmented reality style interface. The hardware consists of a dual core Texas Instruments OMAP 4430 processor (the same processor that was used in the first Android-powered Motorola Droid RAZR), 2 GB of RAM, 16 GB of onboard storage, a 2,100 mAh battery, a bone conduction transducer in place of a speaker, plus a plethora of sensors including a microphone, accelerometer, gyroscope, ambient light, proximity and magnetometer. It's controlled by a mix of voice command and a touchpad and communicates with the wearer through sound (that natty bone conduction transducer) and projection onto a small lens set above the right eye at a resolution of 640 by 360 pixels. Glass includes built-in WiFi and Bluetooth and also has a 5 MP camera, capable of recording video at 720p resolution.

However, whilst the hardware might not sound so impressive, with Glass it's really the software that makes the wearable special. Glass' augmented reality software has been used to provide the wearer with timely and relevant information. Google released a software development kit in the spring of 2013 and there are around a hundred applications available for the wearable. It's seen service as a training and information tool, especially in the medical profession where it can be worn by professionals and in conjunction with the camera, allows the live broadcast of procedures across the world. Glass has been adopted by various businesses in conjunction with customer services, as an inexperienced user may have access to an expert information system. This is arguably the greatest short term market: customer services representatives can provide customers with quick answers to even the most obscure questions as Glass can be used to access an information database, as Edinburgh Airport is currently trialing.

We know that Google have hundreds of engineers working on Glass and Glass Head of Business Operations, Chris O'Neill, recently told Reuters, "We are completely energized and as energized as ever about the opportunity that wearables and Glass in particular represent. We are as committed as ever to a consumer launch. That is going to take time and we are not going to launch this product until it's absolutely ready." Google's Co-Founder, Sergy Brin, had originally speculated that Glass would be ready this year but it's now looking like it'll be available next year (and we only have a few weeks to wait until 2015!).

I am expecting the Google Glass hardware to go through another stage of evolution before it's ready for a primetime consumer release. That's partially because Texas Instruments no longer support the OMAP chipset and I'm sure Google won't simply swap out the processor, but will take the time to further refine the hardware design. If we see Glass released as a consumer product next year, it'll be an exciting time: who else would be interested in picking one up?