Many of you probably remember the launch of the original Motorola DROID. Way back on October 28th, 2009. We've seen a slew of DROID-branded devices come through since then. Including some from HTC and Samsung. Although Motorola did the most of them. In 2011, Motorola announced the DROID Razr. Which was the thinnest 4G LTE phone at the time. Shortly after they announced the DROID Razr Maxx, which was the Razr, but with a much larger battery. We went through three years of that, until the DROID Turbo in 2014. On October 28th 2014, Verizon had an event in New York City to announce the newest DROID, the DROID Turbo. Ironically the 5 year anniversary of the DROID line. Even though Verizon said nothing about it at the event.

The Motorola DROID Turbo is a fantastic device from Motorola and Verizon. I've said many times that it's basically a Nexus 6 Mini. And by all accounts it is. The exact same specs in a smaller body, but a bigger battery. We're looking at a 5.2-inch 2560×1440 resolution AMOLED display, Qualcomm Snapdragon 805 processor, 3GB of RAM, 32GB or 64GB of storage, 21MP camera on the back, and a 3900mAh battery powering it all. It's also running on Android 4.4.4 KitKat with a few enhancements from Motorola and Verizon. 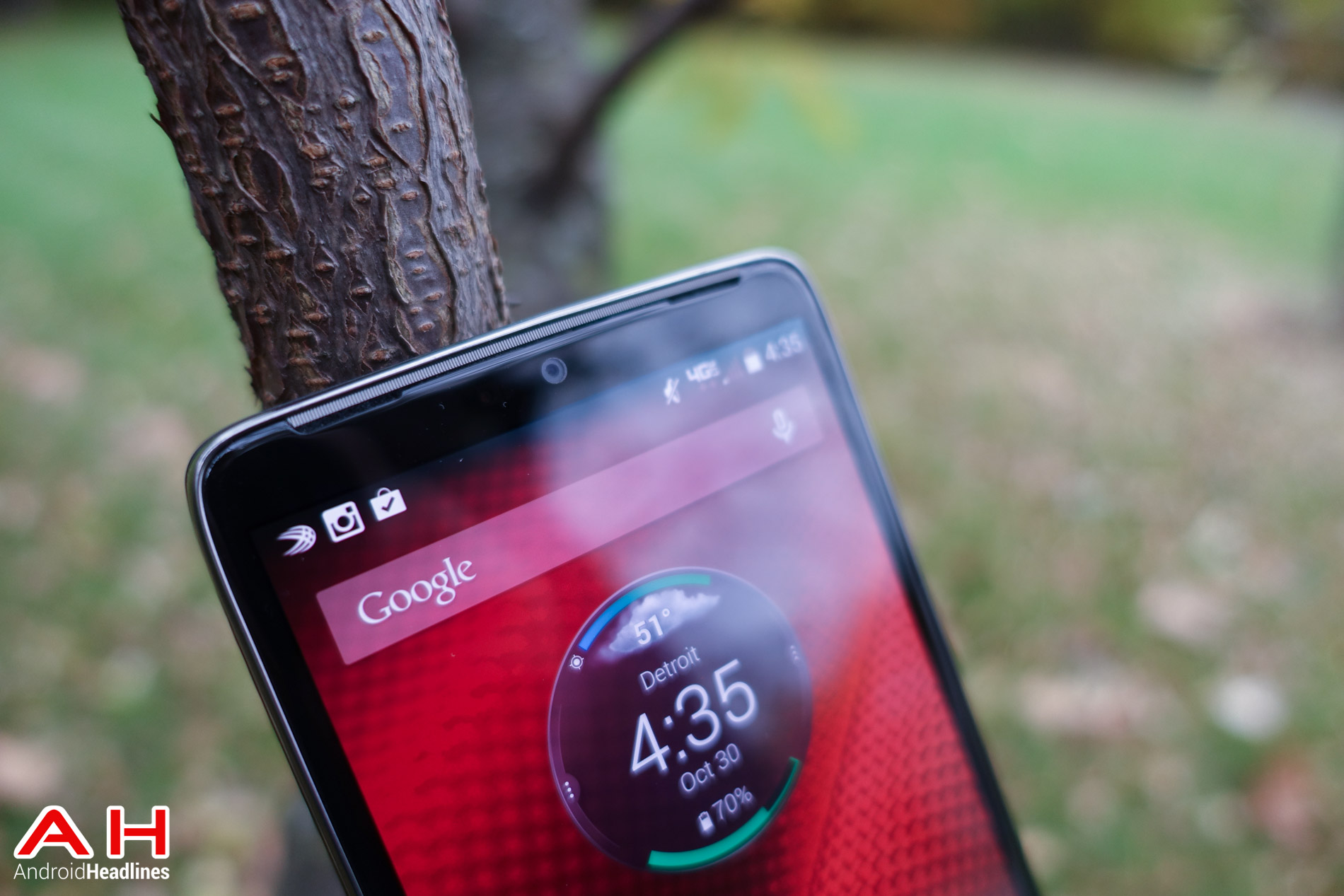 The hardware on the DROID Turbo is very much in line with previous DROID smartphones from Motorola and Verizon. We've got a Kevlar back here – there's also a ballistic nylon back which looks and feels amazing –  as well as capacitive buttons on the front. The capacitive keys aren't bad. But they aren't my favorite. They do look like stock Android KitKat softkeys though. We've got a earpiece at the top which blends in really well, and actually looks awesome up there. There's also a front-facing camera that's centered above the display. With the power and volume buttons on the right side. They are a bit rigid, so that you can feel them.

A lot of people ask how the DROID Turbo feels in the hand. I have to say it feels really nice in the hand. It doesn't have a curved back like the Moto X or the Nexus 6, but it does feel great in the hand. Especially the kevlar backed version. I'd definitely like to see Verizon and Motorola do away with the "chin" at the bottom in the next iteration of DROID. But that's a minor issue. I'd also like to see them do a bit of a redesign. It doesn't look exactly like the previous DROIDs from last year and the year before, but they are pretty similar.

Performance wise, the DROID Turbo can definitely hold its own. But that's expected since it does have a Snapdragon 805 inside with 3GB of RAM. I was able to play games like Asphalt 8 And Dead Trigger 2 with no issues at all. It didn't  even heat up on me either. Which was definitely nice to see. The Display on the DROID Turbo is pretty nice as well. We're looking at a 2560×1440 resolution display here which is 565 pixels per inch. That's pretty insane. I'm not sure it's needed at 5.2 inches, heck I'm not sure it's needed at 6 inches. But damn does it look sharp. It's great for watching videos on as well.

The battery life on the Motorola DROID Turbo is the biggest selling point here, well that and the charger. Motorola and Verizon are touting 48 hours of use out of the Motorola DROID Turbo. I don't think you'll quite get 48 hours. But you can easily get to around 30 hours. I was typically able to get a full 24 hours with about 4-5 hours of on screen time. Which I think is kind of subpar. Seeing as the Nexus 6 can do better than that in that same time frame. Hopefully when we see Lollipop for the DROID Turbo we'll see even bigger gains in battery with Project Volta.

I feel like this is beating a dead horse. As Motorola's software has stayed basically the same for the past year. Starting with the Moto X. We're looking at Stock Android 4.4.4 KitKat here with a few customizations from both Motorola and Verizon. On Motorola's side we've still got Moto Voice, Moto Display, Moto Assist and Actions inside the Moto App. Now Moto Assist allows your phone to adjust automatically. It'll silence during meetings – as noted on your calendar. It'll also silence at night and when you're in the car read your notifications to you. Moto Voice allows you to go ahead and use your phone without touching it. You can say something like "OK Droid Turbo, What's Up?" and it'll read off your notifications as well as the time. Moto Display basically shows you your notifications on the lock screen along with the time. Just like with the Moto X, the DROID Turbo will also breathe if you wave your hand over it. Which is really awesome actually.

There's also Motorola Connect. Which has evolved a bit since last year. Not only can you answer calls and send/receive texts from your PC through the Chrome extension. But you can also add devices like the Moto 360 and the Power Pack Micro. With the Moto 360 you can find where your phone is, also find your watch, and customize your watch faces. Now with the Power Pack Micro, you can view how much battery is left, as well as where you left your battery pack.

On Verizon's side, the only real difference here is DROID Zap. All the other Verizon apps you'll find on every smartphone in Verizon's lineup. With DROID Zap you are able to upload pictures and stuff to the cloud for others in your area to grab. You can set it to automatically upload screenshots as well. If you're worried about who might get these pictures, well you can lock them. And there will be a random code assigned to each individual picture that you share. This code you'll need to give to the person that you want to access them.

Other than that we're just looking at Android 4.4.4 KitKat here. We should see Lollipop rolling out before the end of the year though, knowing Motorola. And their quest to be first.

This is actually the part of the DROID Turbo that mesmerized me the most. Motorola has had a pretty bad track record with cameras on their phones. Just look at last year's DROID Ultra, and Moto X and even back to the DROID Bionic and Atrix. The Motorola DROID Turbo features a 21MP camera on the back. It's a Sony sensor, and should be the same one as the Sony Xperia Z3 (not confirmed though). The camera app is still very basic. Which is probably perfectly fine for most people. There's really only a mode for photospheres, and that's it. I was very impressed with the pictures that it gave me, while I was in New York last week. I'd almost say that it's the best camera on a smartphone right now. The only issue I've seen is that there is a slight lag. When you tap the shutter, it grabs the picture quickly, but there's a bit of a lag after that before you can take another picture. This I believe is in the HDR department. Because with HDR off, there's no lag at all. We've got a ton of pictures down below that you can check out. In low light, great lighting, and even indoors.

For a while, Motorola and Verizon have been pushing out DROIDs that weren't all that exciting. The DROID Ultra last year was alright, but it was basically the Moto X, but as a DROID. Now we have the DROID Turbo which is nothing like the Moto X (and I know a lot of Moto X users are pissed). The DROID Turbo has everything you could possibly want in a smartphone, and at only $199 on contract. Typically a phone like this would be $299. That just shows how much Verizon wants the DROID Turbo to sell. The 32GB Kevlar versions are going for $199 with the 64GB Ballistic Nylon going for $249 on contract. They are also $599 and $649 off contract, respectively.

There's almost nothing bad I can say about the DROID Turbo. The only thing I wish they would change is the exclusivity. Earlier this week, Motorola did announce the Moto Maxx, but it's only going to Latin America. I'm sure I'm not the only one in the US not on Verizon that would love to have a DROID Turbo or a Moto Maxx. As well as Motorola's Moto G has sold, a Moto Maxx on every carrier at these same price points would do even better.

In closing, yes the Motorola DROID Turbo is the DROID you've been looking for!

Trusted By Millions
Independent, Expert Android News You Can Trust, Since 2010
Publishing More Android Than Anyone Else
0
Today
144
This Week
372
This Month
372
This Year
101867
All Time
Advertisement