Google’s Android One program has proven to be quite an amazing one so far, as it addresses the concerns of people who’d rather purchase less expensive phones but still want to be on the latest version of Android.  This was a problem for a long time because even higher-end devices would sometimes never get updated to the latest version of Android, or if they did it would take months or even sometimes around a year.  Now Google is running the update schedule for Android One certified devices, which is currently scheduled to get updates after Google is done updating Nexus devices.  This is a refreshing thing to see in the world of sub-$200 devices, much less ones that cost $100 or less, but that’s what Android One promises.  Today we’re going to be looking at the Micromax Canvas A1, a phone that’s striking similar to the Karbonn Sparkle V that we just finished up reviewing, and offers essentially the same experience as that device with some minor hardware differences.  Is it better than Karbonn’s Android One offering, or are you going to have a hard time telling the difference?  Let’s find out! 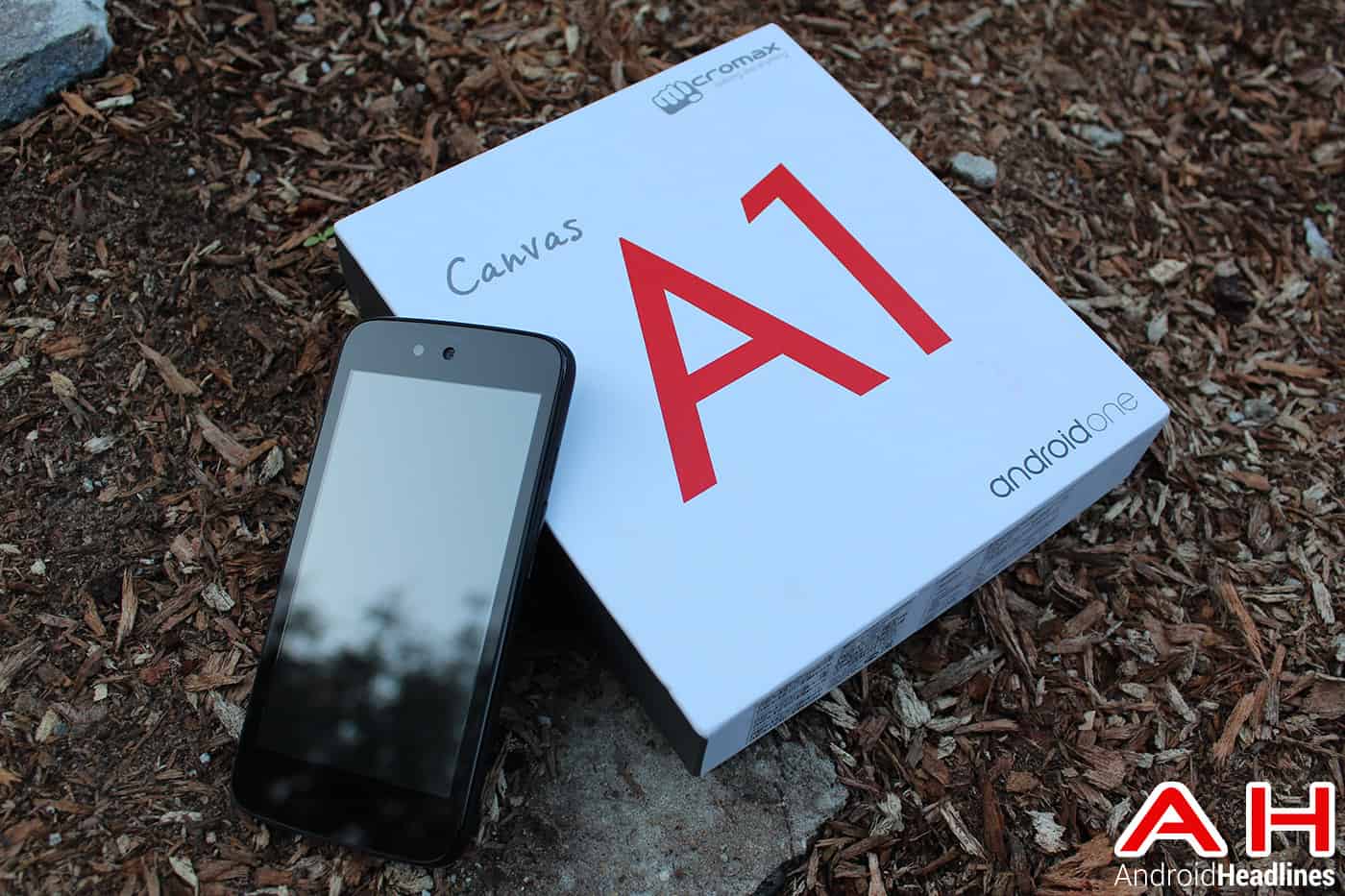 Do these specs look familiar?  They should and that’s because they’re the exact same as the Karbonn Sparkle V.  This is the case with all Android One phones right now though, and it’s to create a base hardware spec for Google so that it’s easier to get updates out without having to make modifications either for a manufacturer’s special software or hardware.  The unfortunate thing here is that it makes it harder to decide between Android One devices as there’s no simple spec sheet to compare.  You’ll find the supported network bands below, so seeing as how this is an unlocked phone from the get-go make sure that your network supports any of these bands.  In the US that means AT&T or one of its MVNO’s if you want anything better than 2G connectivity. 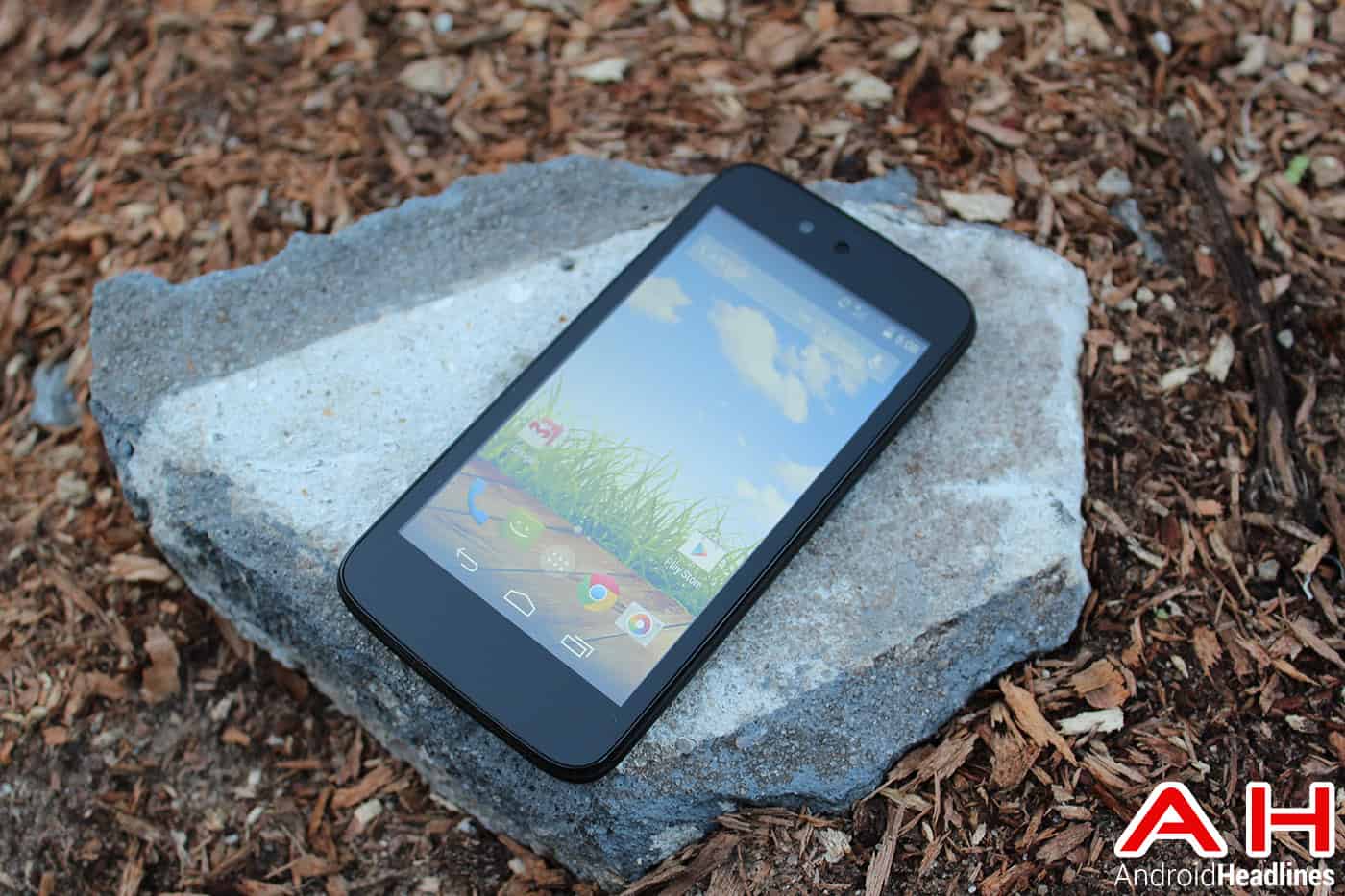 The Micromax Canvas A1 is a great little phone that boasts some impressive specs for the price.  For around $105 (RS 6,499) you get the spec sheet listed above, and the phone feels very well built too.  All the corners and edges are rounded out to fit in your hand better, and the back features a nice soft-touch material to keep it from slipping out of your hand even on those cold days.  The Canvas A1 is light but doesn’t feel cheap or hollow, and you’ll find that holding it just feels great in general.

The volume rocker and power button are found on the right side of the device and don’t protrude much.  They are made out of a slick plastic and feature a satisfying click too.  The top of the phone has a standard 3.5mm headset jack and the bottom has the microUSB port for charging and data transfer.  On the back you’ll find a rather unique circular camera that protrudes ever so slightly, with a faux brushed metal look on the ring and a single LED flash just below the lens.  Micromax’s new fist logo is prominently featured on the back and looks great, with the Android One logo resting near the bottom of the device just above the circular speaker.

The display is about what you could hope for on such an inexpensive phone, and does the job in more than one way.  Playing games, surfing the web and texting all resulted in positive experiences, and I really didn’t find myself bothered by the fact that it’s a much less pixel-rich display than more expensive phones out there.  Being 4.5-inches helped a lot with the 480 x 854 resolution the panel features, and while the viewing angles weren’t great by any means it’s not so bad that you can’t show your friends or family pictures or a YouTube video.  Outdoor viewability was just fine, with brightness levels that aren’t anything crazy but usually enough to keep you from squinting too much to make out what’s going on. For such an inexpensive price you’d probably think this is just a phone for surfing the web or text messaging, but you’d be wrong.  MediaTek has long provided some pretty excellent processors for a fantastic price, and the MT6582 1.3GHz Quad-Core processor found inside of the Canvas A1 is no slouch in the performance category.  Apps on the phone launch quickly, multi-tasking is snappy and quick, and even though there’s only 1GB of RAM in here the resolution of the display helps keep things in check, ensuring that your experience with the phone isn’t a laggy mess.  Gaming was equally as pleasing, with even 3D games running just fine on the phone, albeit with less detail than more expensive phones provide.

Network performance was excellent as well.  On AT&T’s HSPA network I regularly got around 6-8mbps download speeds and around 1mbps upload, which is more than enough for daily tasks.  Browsing the web was quick, downloading apps didn’t take more than a few seconds at a time, and call quality was just as good too.  Reception is a strong suit for the Canvas A1, and it even features dual-SIM support if you’re rocking more than one SIM for whatever reason.  Android is smart enough to know you’ve got the ability to use more than one SIM card and lets you choose between each one for calls, texts and data so that you can keep your plan in check and not go over your allotted amounts.

Battery life was a bit of a mixed bag, but that’s to be expected with a 1,700mAh battery; small by any standards nowadays.  I found standby time to be particularly disappointing with the phone dying overnight with 30% battery left by the time I went to bed.  There were no obvious wakelocks or things keeping the device busy either, making me wonder if there’s some sort of issue here with reception or something else that would normally drain a battery quickly.  Hopefully the Android 5.0 Lollipop update fixes this issue.  Usage battery life was definitely better, and I found that I could get around 2.5-3 hours of on-screen time with the phone in a normal day, but stretching it to the end of the day was difficult at best.  Most of the time I had to recharge it after I got home from work, and on very heavy usage days recharging in the middle of the day wasn’t uncommon.  Battery life isn’t a strong suit here, but again Android 5.0 Lollipop features some killer battery saving features, so we’ll just hope that helps quite a bit. 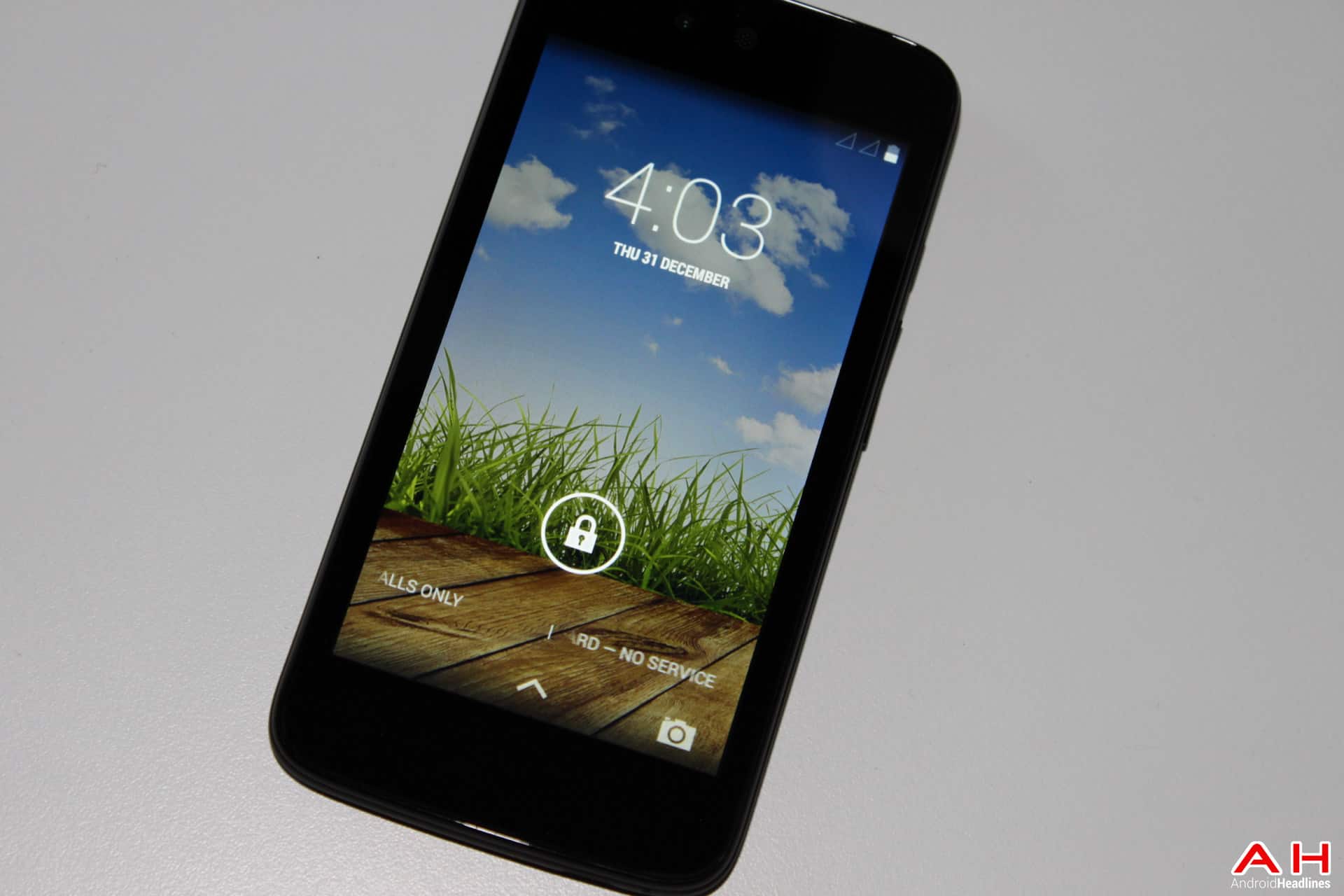 If you’ve ever used stock Android, also known as the Android Open Source Project or AOSP, you’ll know that Android 4.4 KitKat and below is pretty bare bones.  There’s no flashlight quick toggle to be found, no customizable lock screen and generally no filler or fluff features to be found.  Does that mean this is a bad experience?  Far from it as stock Android is one of the fastest and most fluid experiences around, and it has this simplicity to thank for it.  Again Android 5.0 Lollipop adds a significant amount to this experience, and we’d be doing the Canvas A1 and all Android One phones a disservice by not mentioning that fact, but for now you’re using Android 4.4.4 KitKat.

What KitKat does well is in daily operation.  Multi-tasking is simple with the provided Recents button to the right of the home button.  This pops up a vertically scrolling list of apps, complete with thumbnails of what each one looks like for easy identification, and sliding each one left or right closes the app.  It’s a simple, quick and intuitive interface that Android users have enjoyed since the days of Android 4.0 Ice Cream Sandwich, and it’s one that’s welcome compared to come other manufacturer changes out there.  The Google Now Launcher, which is packed with the device, features Google Now on the left-most home screen pane, and offers a super quick way to get to all the fantastic features Google Now provides.

Micromax is using a different size and shape speaker than Karbonn uses on the back of the phone, and it looks very much like a larger version of the one found on the front of the Canvas A1.  The Nexus 5 started this circular style speaker, and it’s one that looks excellent in any condition.  Being on the back of the phone isn’t generally a great place for a speaker, but Micromax has at least put a small raised dot here that keeps the phone from sitting flat on its back when on a desk, ensuring your notifications and sounds can still be heard even when placed flat down.

Sound out of the 3.5mm headset jack was fantastic and features some great equalization thanks to KitKat’s audio rendering engine.  While there’s no built-in equalizer you can always use the one built into Google Play Music or another similar app with that sort of functionality if you need to have an EQ for your audio.  I didn’t need to use an EQ with the phone personally, but you may want it to sound slightly different. 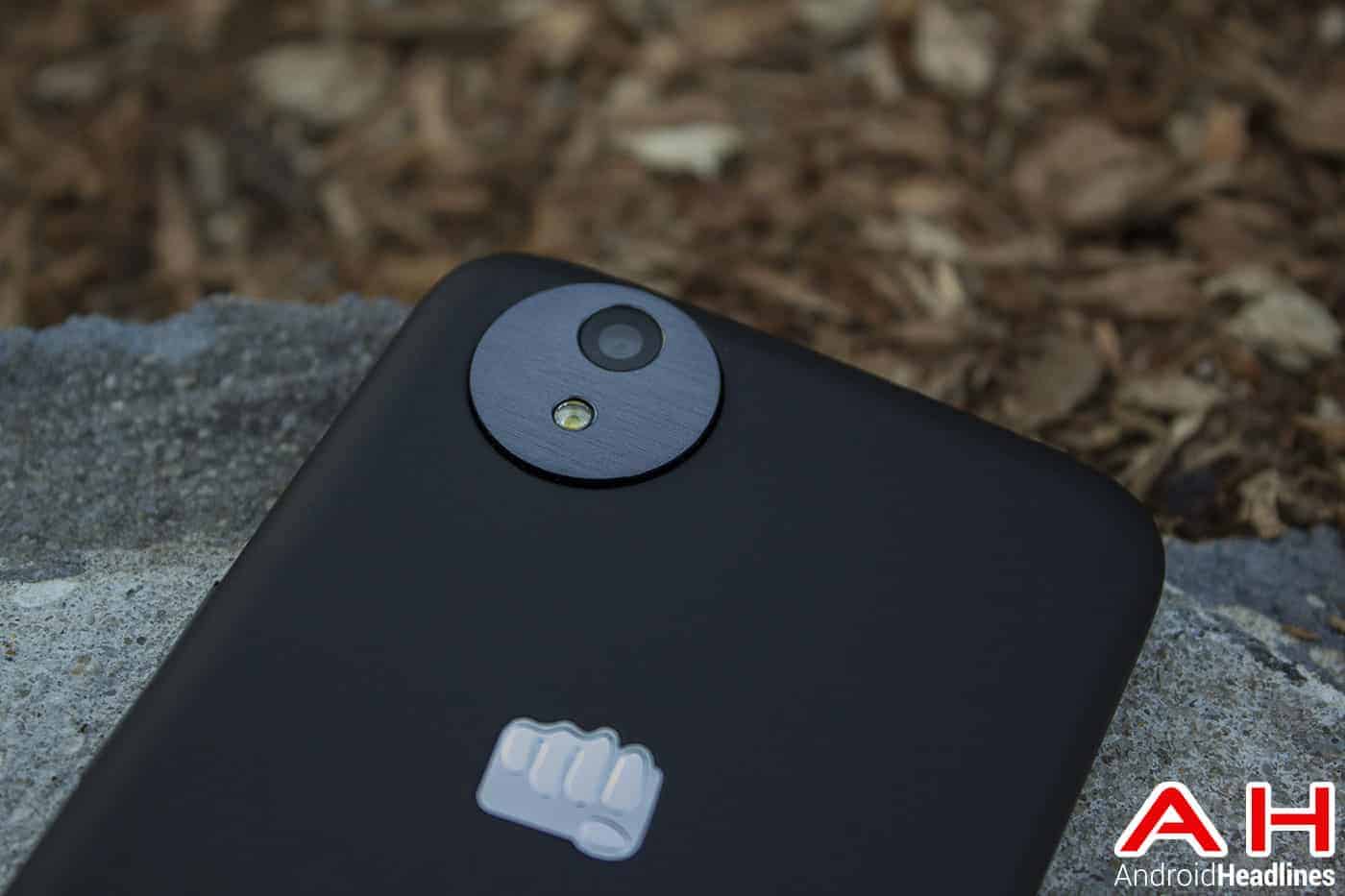 The camera was by far the weakest link here.  I’m not sure what’s different in Micromax’s setup but the shutter is painfully slow, making HDR mode nearly useless because you nearly always get horrible double imaging no matter how still you hold the device.  In standard mode the camera is passable, giving you accurate colors and good lighting balance in most situations.  Google Camera’s extra features like Photosphere, Lens Blur and Panorama are all here and work well, in fact the rendering on Lens Blur was faster than I’ve seen on many phones, but that’s likely due to the lower resolution of these images versus a higher end camera.  The rear camera on the Canvas A1 is 5 megapixel, while the front is 2 megapixel and will work just fine for HD video chats and selfies.

It’s also worth noting that, like the Karbonn Sparkle V, you are required to use a microSD card in order to take any pictures at all.  Without one the camera will not let you take any pictures at all, something that’s got to be added to the total price if you don’t already own a microSD card.  Check out the sample shots below to see what you think. 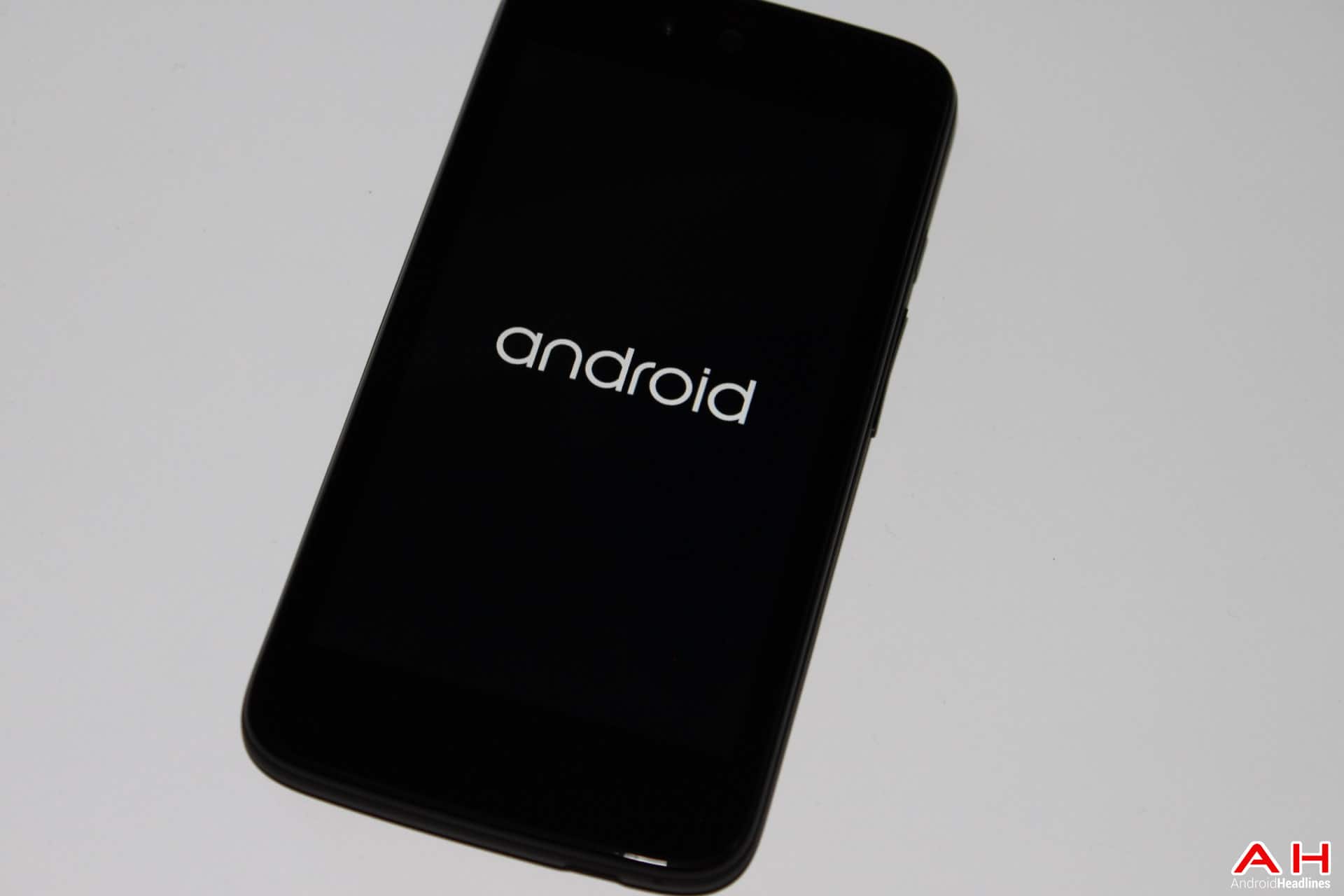 Overall I was much more impressed with Karbonn’s Android One offering than Micromax’s.  The Canvas A1 has worse battery life and a worse camera in every test I ran and I really can’t explain why.  These phones look nearly identical to eachother on more than just the spec sheet, but I would give the device design edge to the Micromax Canvas A1.  It just feels better in the hand, the back feels a little more tacky (which is a good thing, less slipping), and the curves on the edge of the phone make it more comfortable in your hand.  The strong suits of the Canvas A1 are mainly in its price and the Android One program, which promises to keep you updated to the latest version of Android within a few weeks of a release.  Android 5.0 Lollipop will make this phone feel significantly better, and given the issues I had with the phone could likely resolve my problems and make this one of the best budget-priced phones you can buy.

Amazon India has the exclusive on the Micromax Canvas A1, and it is selling for RS6,499.