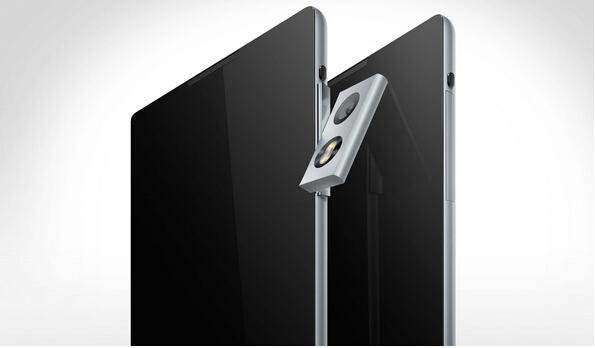 Oppo did a great job with the company's flagship last year. Oppo N1 screamed quality, everything from the build of the phone down to its packaging was done with attention to detail the biggest manufacturers usually do. Very few people expected something like this from Oppo. Even fewer of them expected a big rotating camera on top of the device which serves as a front and rear-facing shooter. The rumors started recently about Oppo N1's successor which will recently be called Oppo N3 for some reason. We've seen tons of material, from the device's cooling system and rumors that it will feature VOOC rapid charging like the Oppo Find 7 to the render of the actual device. We've seen two alleged renders, the first one was somewhat odd and hard to swallow, while the second one looked far more believable. Believe it or not, we have yet another render of this device for you which doesn't resemble either of the two.

This new render is rather… well, odd. This render shows us a completely different concept in which the rotating camera isn't placed on top of the device. If you take a look at the render above you'll notice two devices, or should I say the same device in different forms. First form of the device shows you the rotating camera in its full glory on the right side of the device while you can see it safely tucked away in the second. It seems like the camera will be hidden inside the device, think SIM-tray, but bigger. We don't get to see the whole device in this image, but what we do see is quite impressive I'd say. This device will allegedly feature a premium body made out of some sort of an alloy with aluminum and lithium, though those rumors are all over the place.

The device is expected to feature a 5.9-inch 1080p display and will allegedly be powered by Qualcomm's Snapdragon 805 processor. 3GB of RAM will reportedly also be a part of this package. These are just rumors as well at this point. We liked what we've seen thus far when it comes to Oppo N3 rumors, how about you? This could be a truly great device if rumors pan out in the end.

Advertisement
Trusted By Millions
Independent, Expert Android News You Can Trust, Since 2010
Publishing More Android Than Anyone Else
15
Today
159
This Week
266
This Month
4250
This Year
105727
All Time
Advertisement