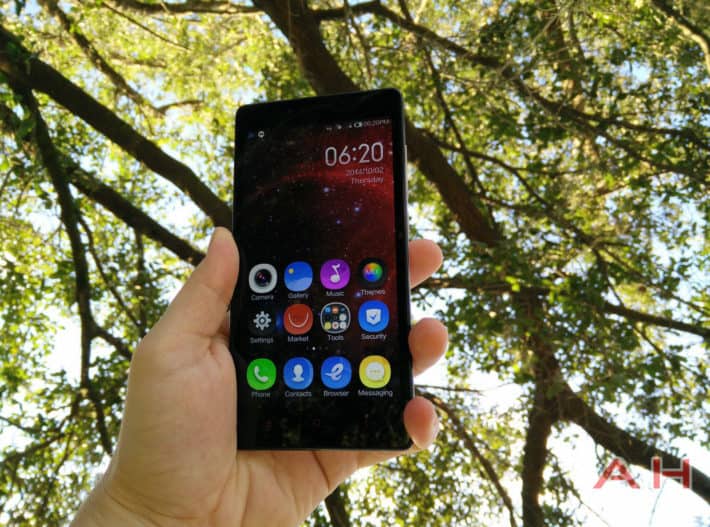 Just about everyone seems to love big phones these days.  At this point it seems that 5-inch screens are almost too small for many people, and while there are plenty who still prefer the experience of a device with less than a 5-inch screen the phablet market is here to stay.  There's also the trend of devices getting cheaper and cheaper in price and finding ways to get around the price limitation by still offering some higher-end components where it really matters.  That's where Xiaomi's Redmi Note LTE comes in, a phone that's decidedly mid-range in almost every respect, but almost doesn't feel like it at all.

Unboxing the Redmi Note LTE was nearly identical to the Xiaomi Mi4: a brown, simply nearly unmarked box with just the little Mi logo in the top right corner, and the specs sticker on the back.  Inside the box the phone is prominently placed face up to give you an immediate look at the device.  Below the cardboard holder you'll find a sleeve of manuals and paperwork, as well as the wall charger and USB cable.  Being a budget friendly phone I wouldn't expect there to be too many extras here, and there aren't.

Now onto the phone itself.  First off this is quite possibly the most slippery phone I've ever used.  I've literally almost dropped the thing twice, and I never, ever drop my phones.  If I were going to use this phone for a longer period of time I'd be getting a case ASAP, it's just not a great material to use case-free.  That being said the phone feels solid but definitely not as premium as the Mi4, which should be no surprise since the Mi4 is literally double the price!  The phone is an all plastic build, with a large 5.5-inch screen and three capacitive buttons below the screen.  The bezels certainly aren't the smallest once I've ever seen on a phone, but they aren't ghastly or anything, and I found the phone just as easy to handle as basically every other phone out there, barring the LG G3 of course since that's got insanely small bezels.

The screen quality was actually quite a bit better than I was expecting since it's only a 720p panel at 5.5 inches.  The picture wasn't as sharp as the one on my OnePlus One, for instance, but it's not offensive in the least bit.  If you've used a Note 2 before you know what to expect, as this is the same size and resolution as that, albeit a different display type.  Brightness outdoors was excellent, and the touch screen was incredibly responsive in everything I did.  In fact I'm going to go so far as to say this is the most responsive touchscreen I've used in years, besting anything from any of the other big phones I've used this year.  The vibration motor that Xiaomi uses in this phone just feels so phenomenal, and typing was literally the best experience I think I've ever had on a smartphone.

Performance is exactly what you would expect from a modern device, and I was able to power through the handful of games I tried including some more stressful ones like Dead Trigger 2.  The octo-core Mediatek chipset inside handled everything I could throw at it with ease.  The camera is the same MIUI 5 camera that can be found if you load up MIUI 5 on another phone, but isn't quite as full featured as the one found on the Mi4.  The photos from the 13MP sensor seemed decent enough but I'll need to put it through some more tests before I make a final decision.  I expect battery life to be excellent as well given the combination of processor, screen resolution and battery size.  All in all this device is mind blowing for the price, which is just a bit over $200 unlocked!  Look for the full review in the coming weeks and the rest of the featured articles between now and then!