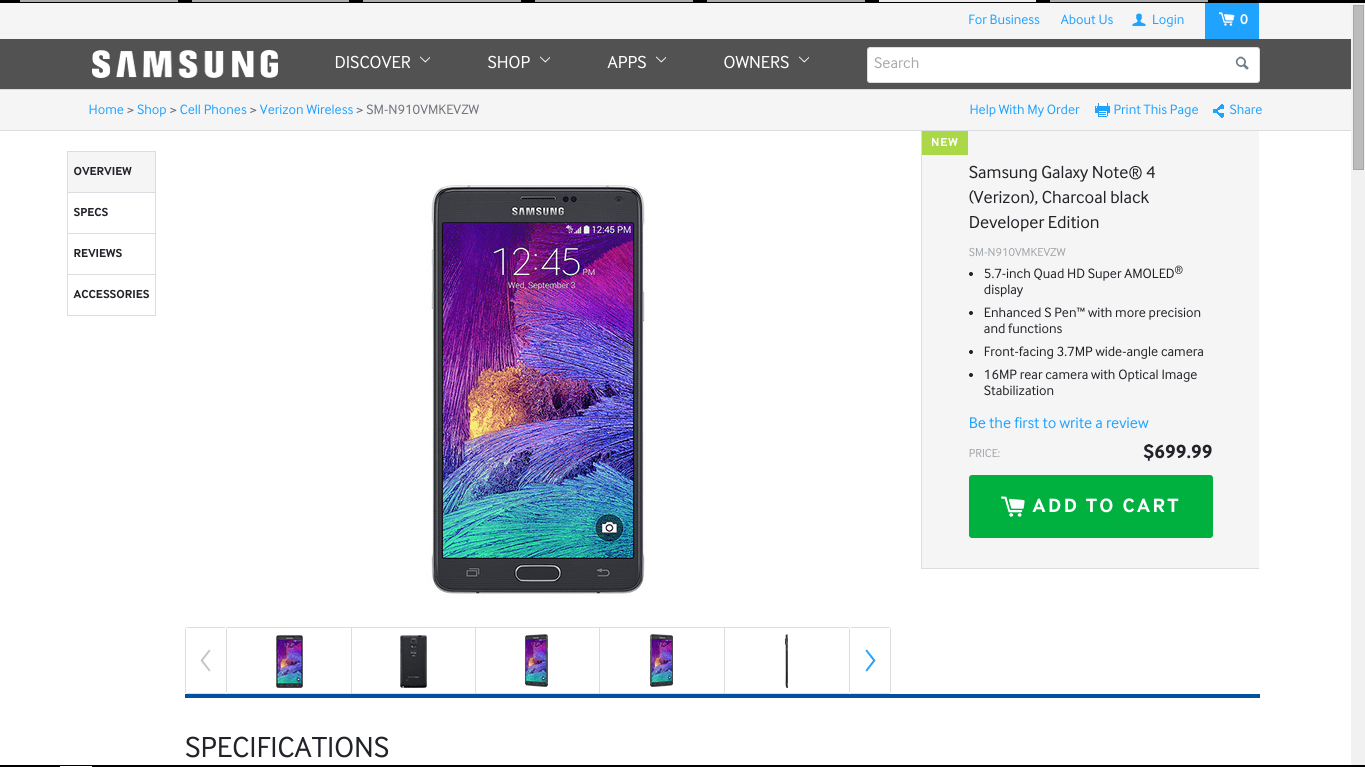 Seven hundred dollars.  That’s a lot of money.  Let’s look at what you could get for a whopping seven hundred dollars.  You could pick up a nice bag of 2800 25-cent gumballs to chew on.  You could pick up four (though bound to Sprint-family networks) Sharp Aquos Crystal phones, and have $50 for accessories or burn money.  You could get yourself an unlocked GSM iPhone 6, in any color of your choosing, while pocketing the remaining $50.  Or, as even fewer people might, you could go over to Samsung’s website and pick yourself up a Galaxy Note 4, for Verizon.

But, can’t you just spend the $300 on a Note 4 with a Verizon contract?  No, you really can’t if you want what this one is offering.  Remember the great idea of ‘developer edition devices’, with the easily unlockable bootloaders?  That beast is back again, and it spat out the Verizon Galaxy Note 4 Developer Edition.

Sadly, Verizon is still utilising its surprising knowledge of software and keeping users from tampering with it to lock the bootloaders of the most expensive and popular Android flagships.  The Galaxy S5 took a few months to crack, and I don’t believe it ever got a developer edition.  Now, the Note 4 is fresh onto shelves, and the big red carrier is offering it up for $700, no contract included.  But wait, there’s more.

Verizon isn’t actually the one selling this phone at that price.  Samsung is.  Verizon doesn’t want you to know they exist, these developer edition devices, the ones that let you ‘tamper with’ Android and hack to your heart’s geeky content.  No, this device might be a gentle nod from Samsung to us customers, letting us know ‘Yes, we know they purposely locked this device.  If you want, you can buy the phone the way we meant it to be on Verizon’s network’.

Here’s the interesting part though.  This device is $700, no contract for Verizon.  It still has the Verizon add-on garbage installed.  The price isn’t as high as it seems. First, the device does still have Verizon’s useless and obnoxious suite of bloatware installed.  But, since it’s a developer edition, you can actually unlock the bootloader, root, and remove any apps you want in minutes, not months.

Then, there’s that price.  $700 is a lot of money, especially for a phone that isn’t as special as the Note Edge and is just an incremental update to a line of devices.  But why is it that much?  That’s how much the device actually costs. Phones are stupidly expensive, and Apple shows that off front and center, whereas many Android manufacturers hide behind, at least in the United States-end of the Internet, behind carrier-subsidized sub-$400 prices tags. Everyone else in the world has to pay the device’s full retail price, and that’s what it would cost an American to get the device like someone in Europe or Asia.

Don’t be shocked by the price, because you know it makes sense.  Be shocked that Verizon is still being a pain for their most tech-savvy customers by locking bootloaders, and then has the non-crippled version for sale in other places as well.  Verizon, if you’re listening, we all love the network and speeds you offer, but we hate the bootloader locking garbage that you put your customers through.  They pay you for service, not limitations.  Knock it off.  So, people of the Internet, which would you go for, subsidized Note 4, or developer edition Note 4?  Which is worth it?  Why do you think that AT&T, when they lock a flagship’s bootloader down like they did on the Galaxy S5, doesn’t release a developer edition like Verizon?  Should we be charged more for an unlockable bootloader, or are you happy with the way it is?  Let us know down below.