It has been confirmed recently that Meizu MX4 Pro will be launched in November. The original MX4 was extremely successful and definitely helped the company not only turn significant profit but promote it all over the world. Many people heard of Meizu for the first time thanks to that device, which is truly a great offering by this Chinese manufacturer. Meizu Vice President, Li Nan, confirmed that the device will sport a fingerprint scanner below the screen and the device even appeared on GFXBench where it revealed a truly beastly specs list. According to the listing MX4 Pro will feature a 5.5-inch 2K display along with 3GB of RAM and 16GB of internal storage. Samsung’s Exynos 5430 octa-core processor will power on this thing and 20.7-megapixel camera which was used in the original MX4 will also make an appearance on this beast.

Anyhow, MX4 Pro listing just appeared on OppoMart along with a render of the phone itself which you can check out above this article. The device seems really sleek with those slim bezels on the side and it seems like 2 leaked devices which were photographed actually go hand in hand with this render. This listing actually goes hand-in-hand with the GFXBench one. According to OppoMart’s listing, the device will sport a 5.5-inch 2K display (by Sharp), 3GB of RAM and 16, 32 and 64GB of internal storage, depending on the model you get. 20.7-megapixel camera is also listed (Sony’s IMX220 sensor), just like the one used in the original Meizu MX4. Meizu MX4 Pro will ship with Android 4.4 KitKat out of the box with Flyme 4.0 OS on top of it, though it will probably get upgraded to Android 5.0 Lollipop in due time. Black and White colors are mentioned as well and this is of course a 4G LTE device. 2-megapixel camera will be located at the front of the device (Sony’s IMX208 sensor) and 3100mAh battery will ship with this handset. MX4 Pro will reportedly measure 144 x 75.2 x 8.9mm and weight 147 grams.

OppoMart lists the MX4 Pro for $699,00 (though it’s not available at the moment, it’s listed as “out of stock”), which is too much in my humble opinion. Reports are pointing at a 2499 Yuan ($408) price for the Chinese market, which would mean the device will be somewhat more expensive worldwide, but not that much for sure. Meizu might even ship it abroad once they introduce it, if not, I’m sure some retailers will manage to sell it at a significantly sub-$700 price. 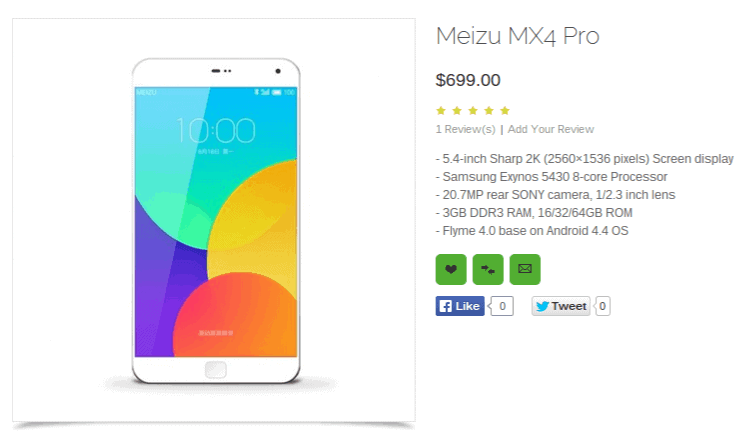