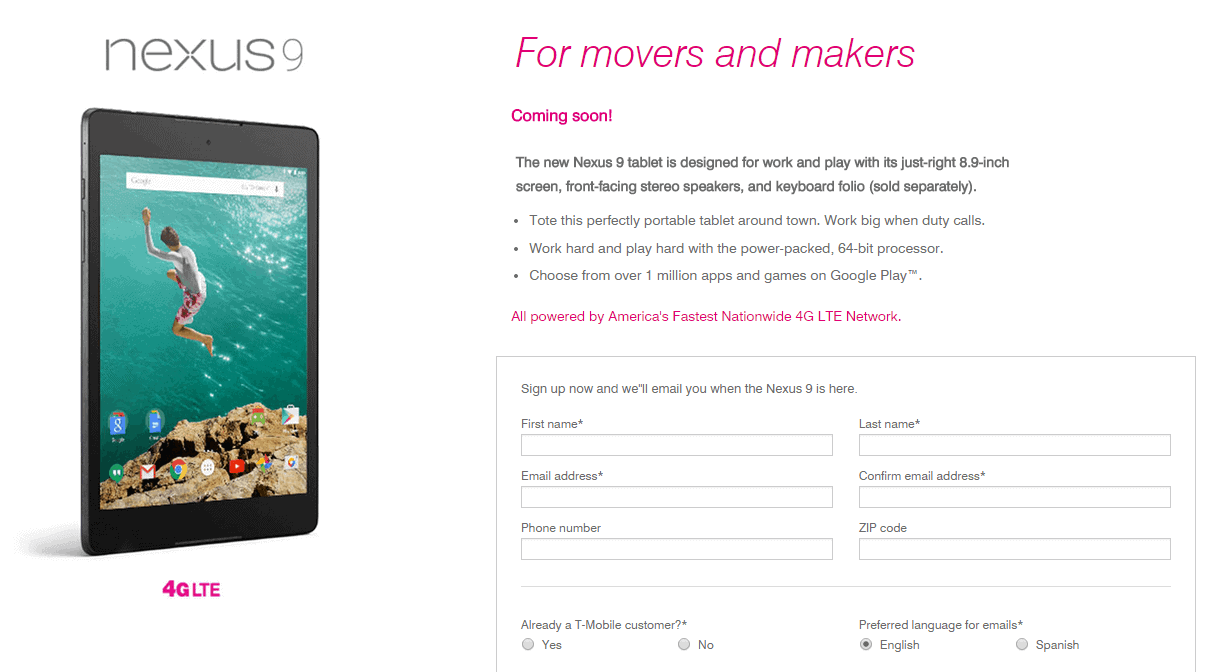 The Nexus 9 is now available for pre-order from various different places, as it hit the Play Store for pre-order just this morning along with Best Buy's online website, and Amazon yesterday through various localized Amazon stores. That has only been the WiFi version of the Nexus 9 though and we've been asked by a few people when and where the LTE model of the Nexus 9 tablet would be available. While the Play Store or Amazon or Best Buy have yet to post pre-order listings for the Nexus 9 LTE, it appears that T-Mobile will be carrying the tablet and you can pre-register now to be notified for when the LTE models are available to order and pre-order.

T-Mobile has been rapidly growing its super fast LTE network over the last year, and they carried the Nexus 7 2nd Gen. LTE model so this really shouldn't be a shock. As stated, since this is a pre-registration page, this simply serves to have T-Mobile notify you when you can buy the tablet and this is not actually the page to place your pre-orders for the LTE Nexus 9. If you're already a T-Mobile customer though or plan on sending your carrier a breakup letter and joining the ranks of T-mobile sometime soon, it wouldn't be a bad idea to get yourself on the notification list and ensure being one of the first to pick up Google and HTC's new LTE tablet when it becomes available.

The LTE Nexus 9 will sport everything the WiFi model of the Nexus 9 has, which means the 64-bit Nvidia Tegra K1 Dual-Core Denver CPU, the same battery and screen and everything else. It isn't clear whether the LTE model will come in both size variants, but we don't see why Google wouldn't offer the LTE model with 16GB or 32GB of storage as the main page for the Nexus 9 doesn't explicitly say the LTE would only come in one size variant. The LTE model also has no exact price listing or official release dates, so this might serve as a good indicator as to when you can pick one up even if you plan on ordering straight from Google Play, because more than likely you'll get a notification from T-mobile about the availability at least days before it goes up for pre-order. If you wanted to WiFi model you can pre-order that now from the Play Store in all colors and memory variants, as well as on Amazon in 16GB or 32GB in Black or White for $399.99 or $479.99