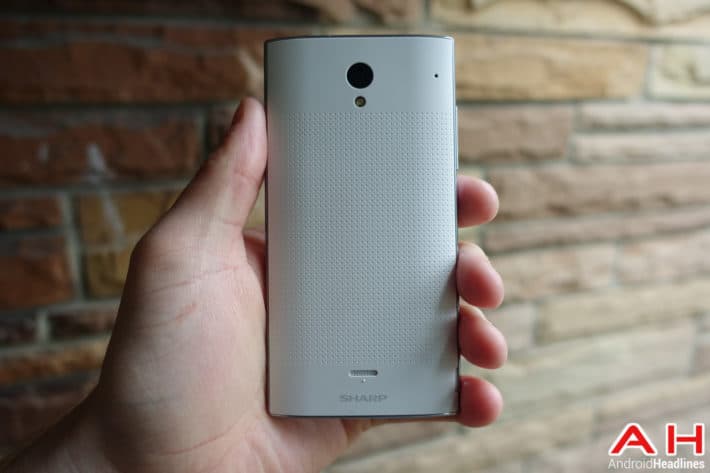 I admit that I'm intrigued by the Sharp Aquos Crystal. It's a mid-range device with some ingenious features. The Aquos Crystal has a 5.0-inch, 720p resolution display that's almost bezel-less, apart from below the screen. Under the skin there's a 1.2 GHz, quad core Qualcomm Snapdragon 400 processor, which is very similar to that of the Moto G. It comes with 1.5 GB of RAM, 8 GB of internal storage plus a MicroSD expansion slot. It's powered by a 2,040 mAh battery, which again is similar in capacity to the Moto G. There's an 8 MP rear camera but no earpiece, instead the entire front glass becomes the earpiece using what Sharp are calling the "Direct Wave Receiver." This technology vibrates the entire panel instead. Opinions vary as to how effective this is, but Sharp point out that you can put your ear to wherever you want as long as it's on the display. We've seen similar technologies before: Google use something similar for Glass and Kyocera have been using speakerless 'phones for a few years now. What makes the Sharp a little different is that the handset includes HD Voice.

However, my reason why I'm interested in the Sharp is because of how distinctive it looks. The mid range internal specification does not particularly bother me as the handset sits in the "good enough" camp rather than flagship status, but Sharp have used a near-stock Android interface and I like this. I am also curious as to the small bezel of the device, which makes the handset comparatively small, especially when compared with the HTC One M8 with its large bezels and front facing speakers. The Aquos Crystal includes some clever features, such as the Harman Kardon LiveStage, designed to provide a better listening experience using the handset speaker. There's also Clari-Fi, which is designed to improve digital sound quality. Check out the video below:

We reported a few days ago that Sprint were getting the exclusive for the Sharp Aquos Crystal. We've even recorded an unboxing too. Now, Sprint have revealed pricing for the handset and I'm encouraged to report that, actually, it's inexpensive! It's just $150 on Boost Mobile, excluding taxes and only available in white. If you fancy a black model, it's the same $150 or $0 down and then $10 a month for two years using Sprint Easy Pay. We still have no word on prices for Europe or the United Kingdom yet, but it looks like it'll be at least equivalent to the Moto G and may even undercut it.