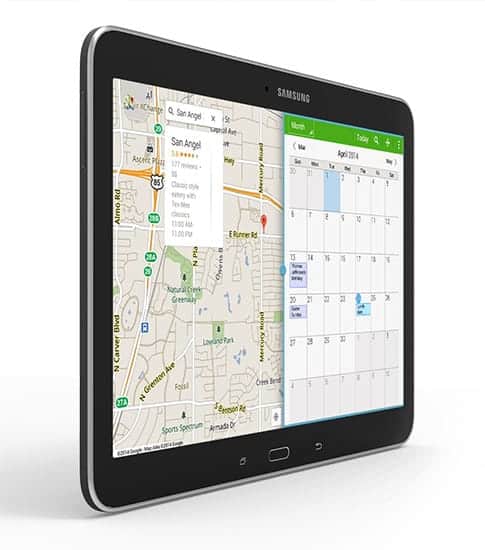 So earlier this year, Samsung partnered with Barnes & Noble to put out a Nook edition of the Galaxy Tab 4. They basically took the Galaxy Tab 4 7.0 and pre-installed the Nook app on it. That's really all that was different here. Although it was about $10 cheaper than the regular Galaxy Note 4 7.0 and it wasn't locked down kind of like how Amazon's tablets are – well they are more forked then locked down. Fast forward to today, where Samsung announces the Galaxy Tab 4 Nook 10.1 with Barnes & Noble. So now those that use Barnes & Noble to read their books and such have a choice between a 7-inch tablet and a 10-inch tablet. We had a look at the Galaxy Tab 4 earlier this year (the regular version) and it was actually quite nice, when you keep the price in perspective. It ran everything quite well actually.

The Samsung Galaxy Tab 4 Nook 10.1 is available today in over 650 Barnes & Noble Stores across the country, and on their website for $299. Which isn't bad for a 10-inch tablet. But I wouldn't buy it solely for the "Nook" aspect, as you can easily get that on any other tablet, like the Nexus 9. Barnes & Noble also state that there are over $200 of content bundled in the Galaxy Tab 4 Nook 10.1  from the Nook Store. Additionally, you've got all the free goodies that Samsung throws in on their tablets as well. So there's plenty of free things here which is nice.

So Barnes & Noble's new business strategy is to partner with Samsung and use their current tablets and add the Nook app and sell them in stores. It'll be interesting to see how this works out for them. As obviously the Nook tablets didn't work out well at all for them. As Amazon has been the king of e-readers for a while, and even their Kindle Fire's are doing pretty well.