I am not looking forward to this comparison, the tough ones always harder to write than the ‘slam dunk’ kind.  The venerable Samsung Galaxy S5 is going up against the new and elusive Sony Xperia Z3.  The Galaxy S5 came out a few months ago and the Xperia Z3 will be out sometime this year, exclusively on T-Mobile in the U.S.  These two devices have so much in common and that is why it will be a difficult decision to weed out the best of these two wonderful smartphones.

Both of these devices have almost identical display sizes – 5.2-inch versus 5.1-inch – they are both Full HD resolution of 1920 x 1080 pixels.  The only difference is the display technology…the Z3 uses an IPS LCD and the Galaxy S5 uses Super AMOLED.  Both devices use the exact same Qualcomm Snapdragon 801 quad-core processor clocked at 2.5GHz and the same GPU chip.  The Z3 and the S5 both offer you a choice of 16GB or 32GB of internal storage and both devices had the ability to add an additional 128GB of internal storage via a microSD card slot.

Please take a look at the detailed specification sheet below and you can see exactly where these two devices stand with each other. After that we will look at each individual device and point out its pros and cons to try and arrive at a winner to this comparison. 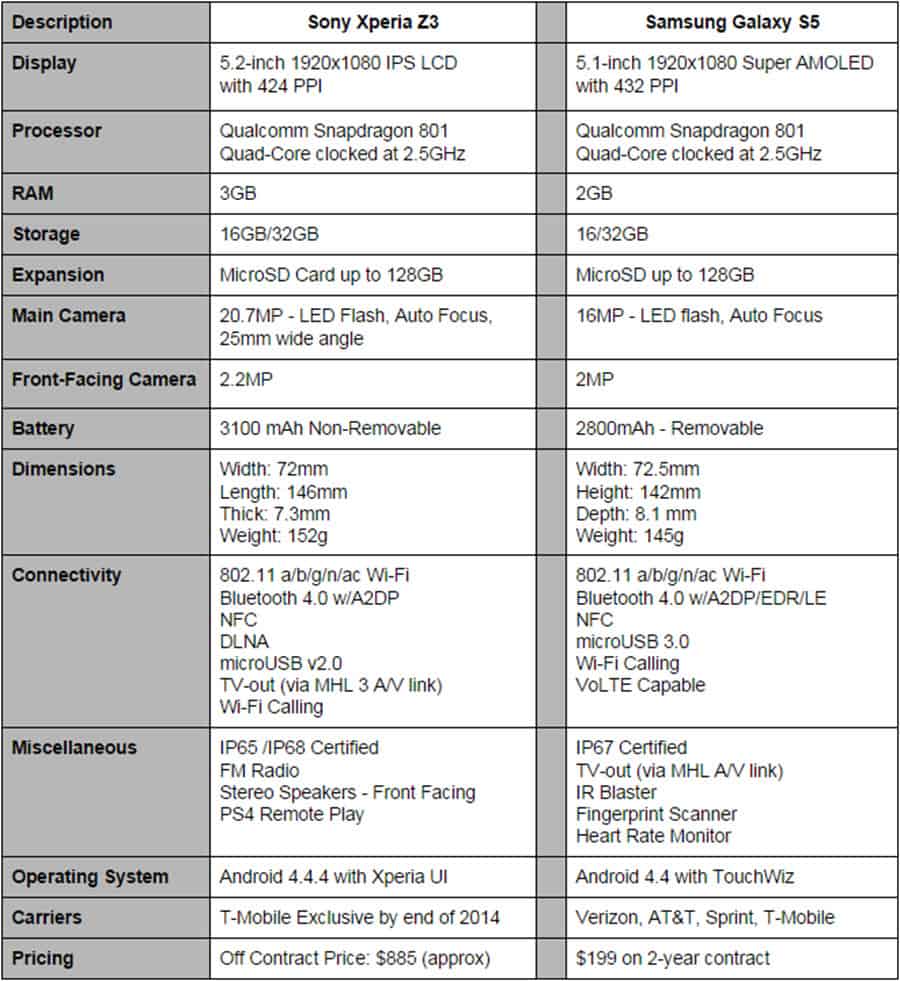 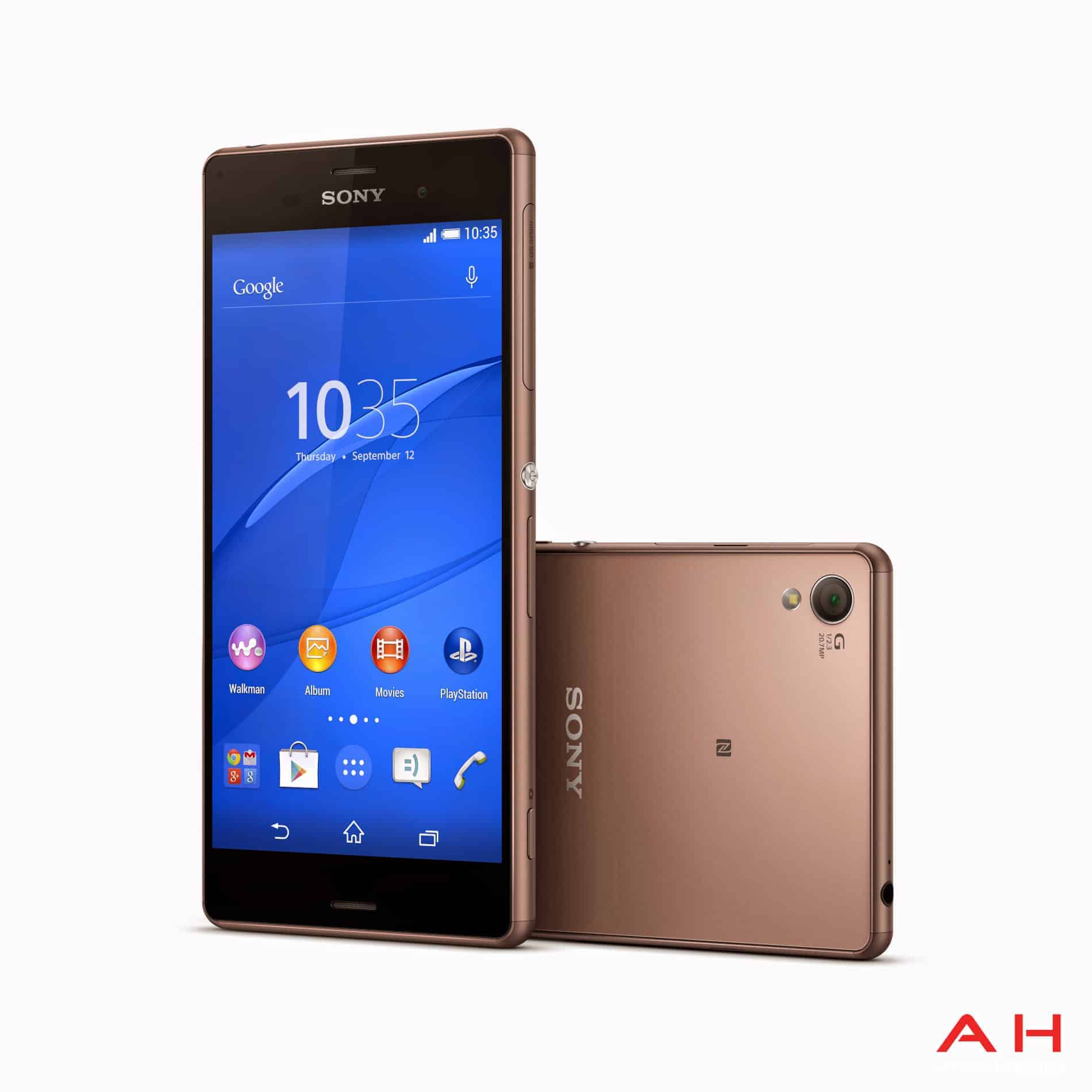 The new Sony Xperia Z3 is a refresh of their six-month old Z2, which never made its way to the U.S…such is the fate of many Sony smartphones and tablets.  We are happy that the Xperia Z3 will at least be on the T-Mobile network, but it would be nice if other networks and Sony could work out their differences and their products could then become more prevalent.  The Z3 is a beautiful device, made from metal and glass – ala previous iPhone – and it has a solid feel, if not a little uncomfortable to hold over long periods of time.

With all of their similarities between these two devices, we can find a few differences…the first one is the amount of RAM – the Xperia Z3 has 3GB and the Galaxy S5 chose to stick with 2GB.  The Main cameras are definitely different with the Z3 sporting a huge 20.7MP 25mm wide-angle lens, which will allow the user to fit more image into each photo.  Other than the larger lens, they both have a LED Flash and auto focus, and neither device has the Optical Image Stabilization (OIS).  Sony is known for their dedicated camera button and great camera sensors and the Z3 should not disappoint.  The Z3’s 3100mAh battery is larger than the 2800mAh of the S5, although Samsung has done a lot to improve battery performance, so the batteries could be a wash.

Both devices have the mandatory Wi-Fi, Bluetooth, NFC and both devices do have Wi-Fi calling capabilities.  The Z3 has front facing stereo speakers, an FM Radio, and two big deals- the Z3 is IP65/IP68 certified against dust and water, so much so, you can actually take the Z3 underwater to film a video or take pictures and with an optional controller, and your Z3 can be used for PS4 Remote Play.  No pricing has been announced, but it is estimated to cost approximately $850-$900 off-contract. 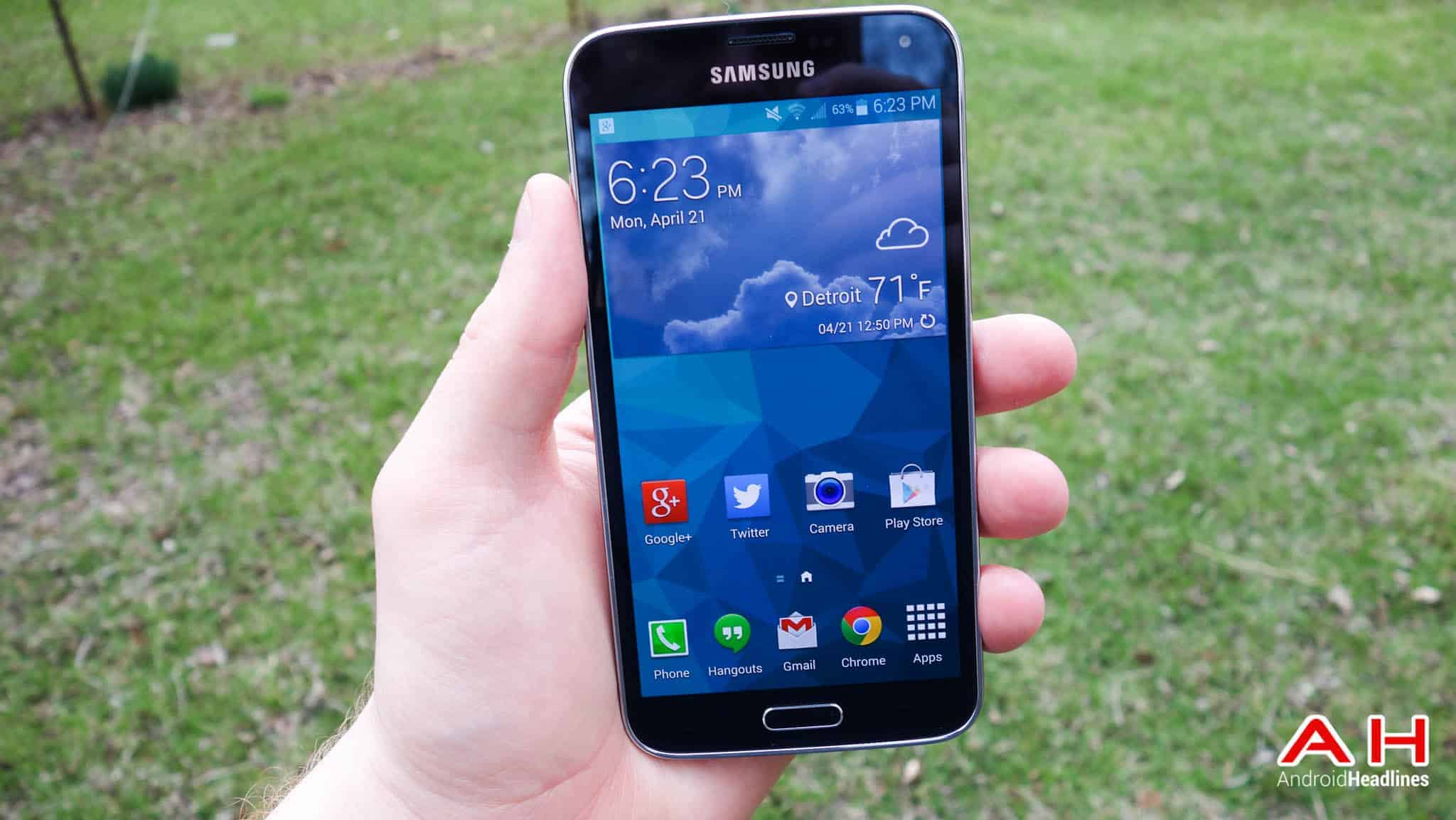 When the Samsung Galaxy S5 was released, you could ‘feel’ the disappointment in the air and the harsh words of early critics came from every direction; but after the flaming was put out (or at least smothered somewhat) it became clear that the S5 was an overall solid device.  With it available in over 160 countries and discounted from the start, it has actually turned out to be a good seller for Samsung.  The looks were not change much at all, other than a removable backing that gave the device a nice grip and feel, but many touted looked like a Band-Aid, however, many of those critics actually liked it once they saw it up close and used the device.

Going down the list of specifications, the Xperia Z3 and Galaxy S5 are very evenly matched.  As far as the display goes, if you are an AMOLED only fan, than the S5 is definitely for you, but many like the more ‘washout’ look of the LCD technology – I am not a fan of it, myself.  DisplayMate Technologies rated the S5 display as the “best display they have ever tested” – a title that held up until the Galaxy Note 4 beat it out.  The processors are identical, although the S5 does only have 2GB of RAM versus the 3GB of the Z3.

Even though Samsung improved the S5’s main camera from 13MP to 16MP with auto focus and an LED Flash, it does not stand up to the Z3’s 20.7MP 25mm wide-angle lens, auto focus and LED Flash – neither device has OIS.  Samsung has made great strides in preserving battery life and even has an Ultra Power Saving Mode (UPSM), so the 2800mAh removable battery should do battle pretty well against the Z3’s larger 3100mAh battery…although Sony has their own version of power saving as well.

As far as features or highlights go – the Samsung Galaxy S5 has IP67 certification for dust and water…certainly not as good as swimming with a Z3, but you are protected for daily use.  Both devices are Wi-Fi call capable, but the S5 is also VoLTE ready and the Z3 is not.  The S5 is also an IR Blaster and has a fingerprint scanner and Heart Rate Monitor built-in…necessary or not, you be the judge.  The S5 is running Android 4.4 KitKat with TouchWiz on top and is available on all major U.S. carriers and is cheaper than the Z3. 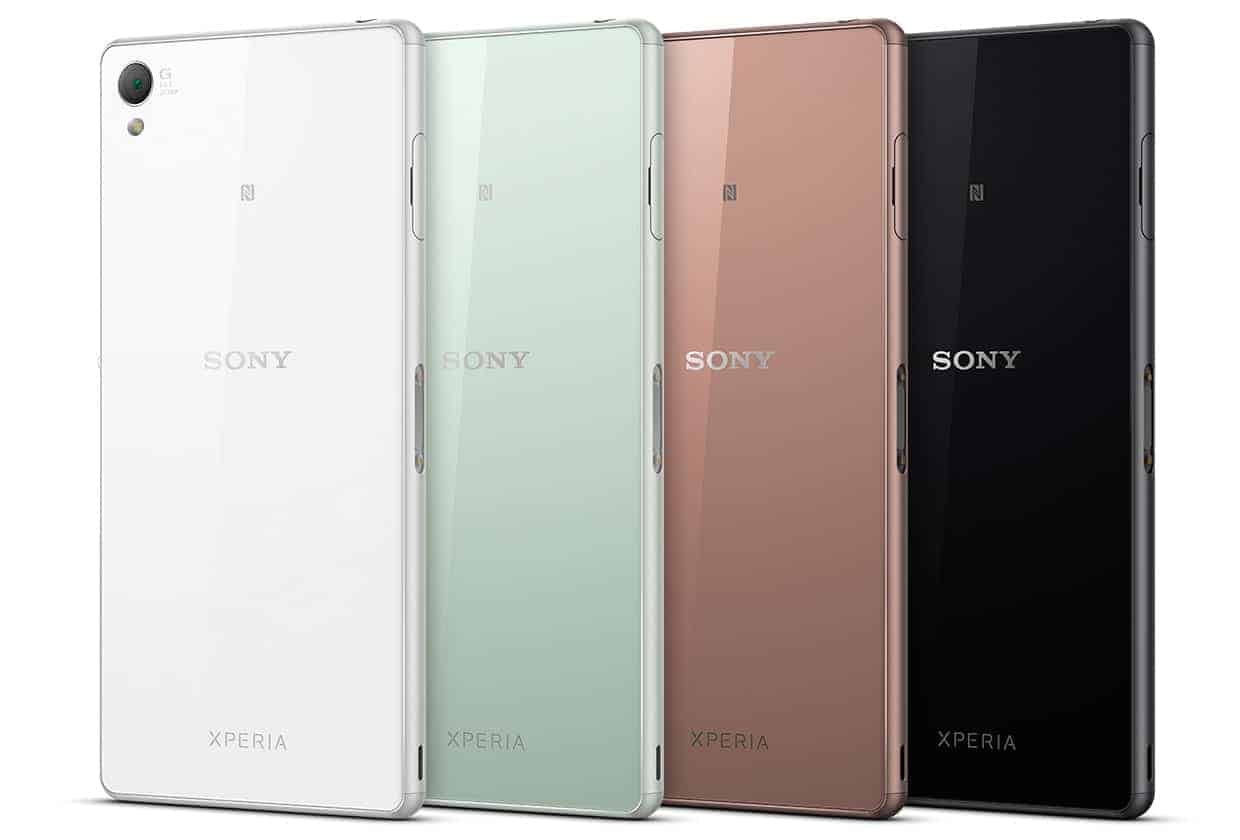 This is a tight race, but I leaned towards the Sony Xperia Z3 as the winner in this comparison.  I think too many times we go with what is familiar, comfortable and easily available – like the Samsung Galaxy S5.  While the Sony devices still seem rather a mystery to most of us, we have to give credit where credit is due.  It is a beautiful looking device with its metal and glass body (although smaller bezels would be nice), whereas Samsung really could have done much more than they accomplished with the S5 – look at the Galaxy Alpha’s design.  The displays are close in everything, the processors are identical and Sony threw in more RAM than the S5.  The Sony camera is definitely better than the Samsung’s, and they even threw in a larger battery (although not removable) and yet the Z3 is thinner than the S5.

VoLTE calling is coming, but as long as Sony gets it in their Z4, the Z3 will be okay in that respect.  It has better waterproofing – not necessarily a plus to some people, but a nice feature to include.  The front speakers trump a rear speaker any day, and if you are into PS4 game playing, the Z3 is definitely your pick.  Yes, the S5 has an IR Blaster (I like that feature) and a fingerprint scanner (could be useful in the future) and a Heart Rate Monitor (a nice idea if you are a runner), but are they really enough to push the Z3 aside – I think not.

Please hit us up on our Google+ Page and let us know which one is your winner and WHY…as always, we would love to hear from you.