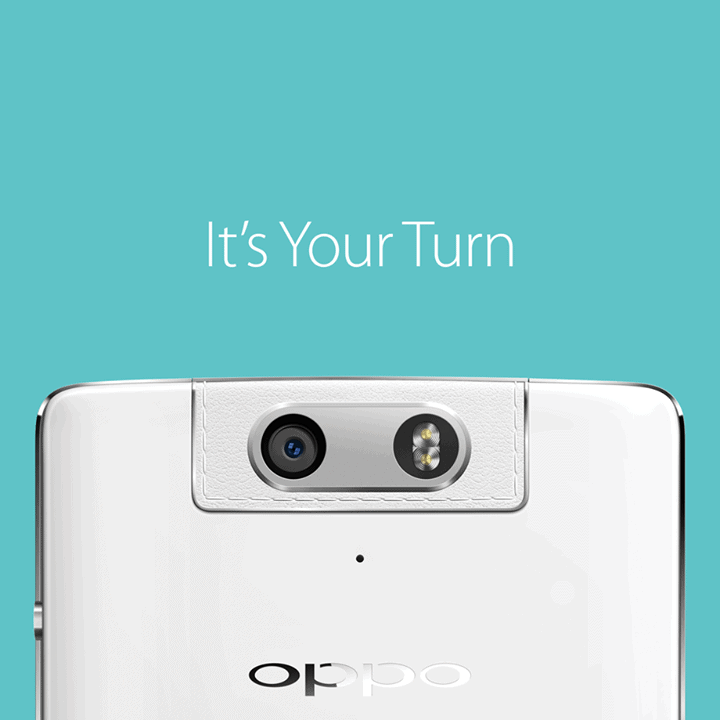 Oppo N1 was, and still is, a great device. Oppo launched this odd-looking phablet about a year ago and it still has some respectable specifications, it aged well I'd say. 5.9-inch 1080p IPS LCD display is still a rather high-end as is 2GB of RAM this thing is sporting. Qualcomm's Snapdragon 600 is still a solid performer despite the fact there are much more powerful chips on the market now and N1's rotating 13-megapixel camera can still offer great photos. It's time for a new device though, Oppo N1's successor is going to be announced on October 29th in Singapore as it was confirmed by Oppo recently. Many leaks and official information reached our eyes and ears over the last few weeks and I'm going to round them up here for you, just to give you a clear picture of what can we expect on October 29th.

First thing's first, launch date, I already mentioned it will be launched on October 29th in Singapore, though it seems like Oppo will hold another event in Beijing, China, at the same time. This information isn't confirmed at this point, but it sure looks like it. The most distinctive feature of Oppo N1 was its rotating 13-megapixel camera, Oppo N3 will feature a rotating camera as well, though it will be an improved one of course. Oppo's CEO confirmed we'll see a 16-megapixel shooter on Oppo N3 which will sport a 1/2.3-inch sensor. Oppo also shared a teaser image of said camera which you can check out if you take a look at the featured image above this article. That's not all Oppo's CEO shared with us as far as the camera goes though, he also shared a video which shows N3's camera in action and it seems it will be attached to some sort of motor so you won't have to rotate it yourself. This really does sound futuristic, no matter which way you look at it. No doubt Oppo will also implement a ton of camera software features inside this phone in order to really show off its capability.

That's it as far as camera goes, let's check out the rest of what we know thus far. It is rumored that Oppo N3 will feature VOOC rapid charging, just like Oppo Find 7 did. This means that Oppo N3 will need about half an hour to hit 75% mark, presuming you let the battery die completely. Rumors also say that Oppo developed some sort of cooling system which they'll implement in Oppo N3 and that Oppo might also announce Gear VR competitor alongside the Oppo N3 on October 29th. We've recently also seen an alleged image of Oppo N3 which shows us what seems to be a fingerprint scanner on the back of this device, similar to what we've seen on HTC One Max and Huawei Ascend Mate 7. And last, but not least, the build and specs of this thing. Oppo will reportedly use 7075 aluminum alloys to build the N3, which means that the device will be extremely light and yet really sturdy. Rumors say that Oppo N3 will sport a 5.9-inch 1080p or 2K display along with 3GB of RAM. Qualcomm's Snapdragon 805 quad-core chip is said to power this thing, though nothing is confirmed just yet.

There you have it, everything we know and think we know about Oppo's upcoming flagship. It seems like Oppo really has big plans for this device and if everything we've heard is true, this will be one hell of a smartphone. Oppo N3 will be announced in about 10 days and we'll, of course, let you know if we stumble upon any more details in the meantime. Anyone excited about this thing?