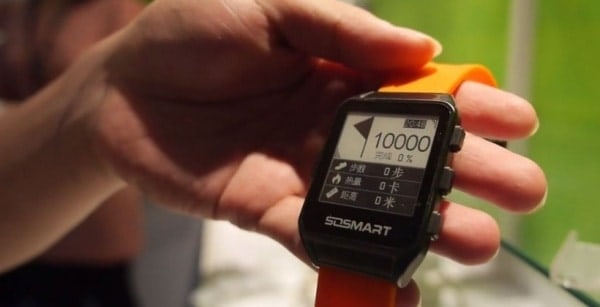 Remember Onyx, makers of the e-ink Boox smartphone? Yeah, the very company has now shown off a prototype of a smartwatch that works on the same technology… at least as far as the display on it is concerned. The device consists of a 1.56-inch e-ink panel, which makes it quite an interesting, and rather unique device.

E-ink displays have been used on e-book readers since a while now. The USP of e-ink panels is that they hardly draw any power when left static, an idea that goes well with the usage pattern generally found on e-book readers and smartwatches. However, not a lot of companies have shown off e-ink display enabled smartwatches. Onyx seems to have gained expertise in making such devices, which is perhaps why it is among the first makers to show one. The device was shown at the ongoing HKTDC Electronics Fair, with a model name 'SOSMART'. Despite that, we don't know yet how smart the device will be or is, but it's being said that it works on a modified version of Android, which doesn't come as a surprise.

A lot of the aspects are still being worked upon, which includes the 1.56-inch panel's refresh rate which doesn't look like the best at the moment. Once released, you'll be able to pair the smartwatch with your smartphone using Bluetooth which comes built-in on the device. It should make for a decent smartphone companion, given that they get the pricing right, which we have a feeling will be the case. The e-ink display also means that you'll have little or no worry about the battery life on this one; this is somewhat a deviation from usual smartwatches, some of which require to be charged a couple of times a day.

Do let us know what you think about the prospect of a smartwatch with an e-ink display. In my books, this makes a lot of sense if done right; after all, you don't expect a smartwatch to be your multimedia companion and a long-lasting e-ink display sounds just about perfect.