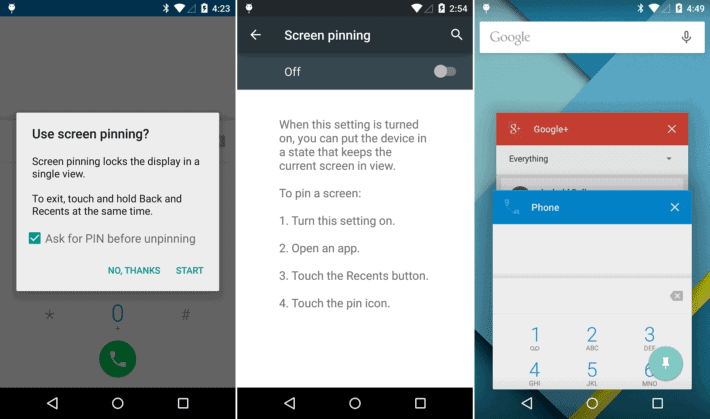 Screen Pinning solves a problem that we’ve run into from time to time. Say you have a friend or family member who wants to borrow your phone for something. Maybe they need to make a phone call, or you want to show them a video on YouTube. What you don’t want is for them to go through other parts of your phone. Screen Pinning will let you lock an app to the screen so that you can hand your phone over without fear of someone seeing something that you don’t want them to.

To activate Screen Pinning in Lollipop, you’ll need to head into Settings and then Security. Scroll down to the bottom of the list and simply enable Screen Pinning. You then activate the feature by opening your Recents and tapping on the pin in the corner of the screen. That will pin an app. At that point, the navigation buttons will freeze so they don’t do anything. The Back button will still work, but only within the pinned application. The status bar icons disappear and the notification panel won’t pull down anymore. To disable Screen Pinning, you hold down the Recent and Back until the feature turns off. Pinned app remained pinned even if the screen is turned off.

The new Screen Pinning feature can be used to keep prying eyes out of sensitive areas of your phone. I will be using it to keep my kids from getting into my phone Settings when I give them my phone to play a game. I can’t wait for Android 5.0 Lollipop.