When a new smartphone comes out – especially one like the Motorola Droid Turbo – spec’d out with the latest and greatest technology, we like to look back at some of the other more recent devices and do a little comparison.  Below, you will see a comparison specification sheet with several key areas compared on the new Motorola Droid Turbo, the Motorola Nexus 6, the Samsung Galaxy Note 4, the LG G3 and the new Apple iPhone 6.  Please look over the spec sheet and then we will talk a little about each device and how they stack up to one another.

There are some interesting things we can discuss looking at these five devices – two of them are made by Motorola (three if we would have included the new Moto X)…when was the last time we were ever able to say that about Moto!  Four of the top five devices  are Android and of those four they all have Quad HD (QHD) displays and three of them are using the AMOLED technology, not the LCD we are so used to seeing.  The LG G3 and iPhone 6 use the IPS LCD technology – the LG G3 also sports the newest QHD display, which means that the four sporting QHD have a resolution of 2560 x 1440 pixels.  The iPhone 6 improved their display, but only to 1334 x 750 pixels – still a bit shy of the QHD used on the Android devices.

When it comes to processors, we can see that Qualcomm rules with the four Android devices all using Snapdragon processors.  The LG G3, which has been out a tad longer, only uses the 801 quad-core clocked at 2.3GHz.  The Droid Turbo, Nexus 6 and Galaxy Note 3 all use the newest 805 quad-core clocked at 2.7GHz and all four models come with 3GB of RAM and 32GB of internal storage.  The Droid Turbo and Nexus 6 also have a 64GB model, but no room for expansion like the other two, which can add an additional 128GB of storage via a microSD card.  The iPhone has three configurations – 16GB, 64GB and 128GB – with no room for expansion.  Let us not forget about the iPhone processor – it is an Apple 64-bit, A8 dual-core clocked at 1.4GB…it is 64-bit versus the 32-bit processors of the other devices, however, with only 1GB of RAM, the benefits of 64-bit are really nowhere to be found – okay, software, when rewritten for 64-bit benefits somewhat. Cameras are always a hot topic so let’s get into them right now – The new 21MP on the Droid Turbo really blows the others away at this point.  The Nexus 6 and LG G3 have a 13MP model and the Galaxy Note 4 has a 16MP shooter, while the iPhone 6 brings up the rear with only 8MP – not to say that the iPhone 6 does not take great pictures…it does…but the other devices have either caught up or surpassed the iPhone 6 at this point.

Another important factor in using a smartphone is the battery life – the Droid Turbo easily wins with a 3900mAh battery and 48 hours of usage, followed closely by the Nexus 6 and Galaxy Note 4 with 3220mAh batteries.  The LG G3 has a 3000mAh battery and the iPhone 6 comes in at a measly 1810mAh battery – they are so adamant about being so thin that Apple deprives their users of a bigger battery.  The Droid Turbo, Nexus 6 and Galaxy Note 4 all benefit from a rapid charge technology as well. The Droid Turbo is only on Verizon, but the others are on all major U.S. networks – the Androids all use the Android OS…Nexus 6 will have 5.0 Lollipop, while the others have 4.4 KitKat.  The Apple iPhone uses iOS8, of course.  There are too many software differences to discuss here, and pricing is different across all lines with the iPhone being the most expensive overall.  So please hit us up on our Google+ Page and let us know what you think about these five powerhouses and which one you are eyeing up…as always, we would love to hear from you. 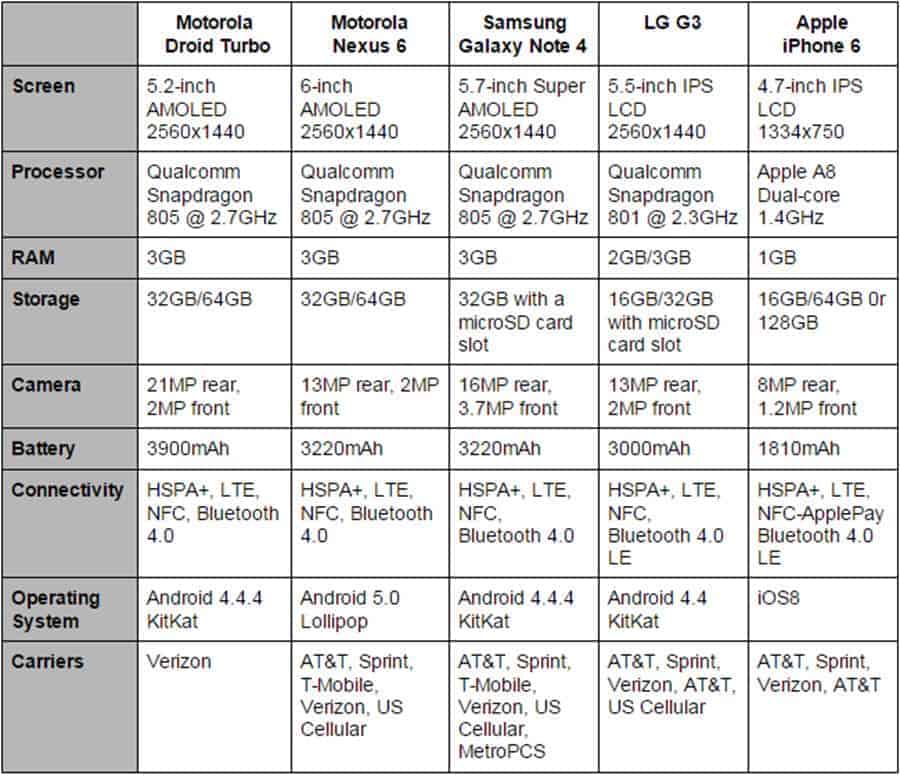