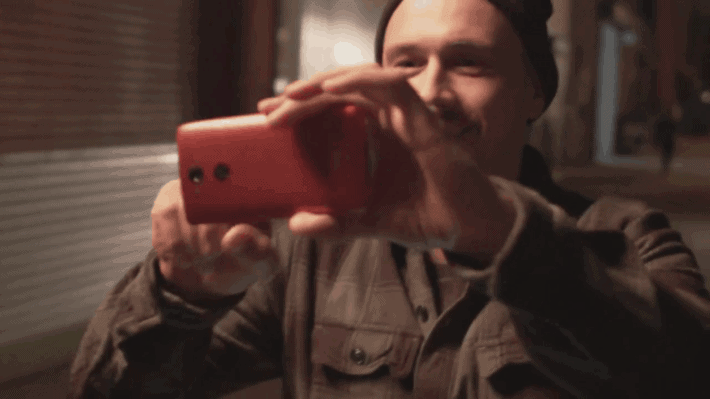 Today has certainly been an interesting day so far. For those that don't yet know today is the eve of the Motorola and Verizon Droid launch event. Yes, tomorrow is the day the newest of the Droid range the Motorola Droid Turbo is unleashed or at the very least unveiled. To mark the event the Droid's dedicated twitter page @DroidLanding has been throwing out a few curveball videos. Its not clear if Halloween has gotten to them but either way they are a little off-beat today. The first video we reported on a short while ago is a strange and surreal 8 second video entitled 'Gargoyle'. This video simply shows part of a Gargoyle, a red cloth and an outstretched hand. Don't ask, I don't know.

Well, to add to this weirdness another random video has gone live on the twitter account and in many ways is much weirder. The new video stars Hollywood's very own James Franco (Pineapple Express anyone?) on a bike. Yes, it does. In the video Franco is riding around in a circle (as you do) and talking to either some friends or fans who are filming him on their smartphone. Anyway, Franco disappears out of shot only to reappear coming behind the friends/fans from the opposite direction. He then pulls out of his pocket what is almost certainly a Droid Turbo phone, snaps an image of the friends/fans and starts to ride away only to very suddenly be quite far in the distance. Now it doesn't take a genius to figure out this is a play on 'Turbo' with Franco moving at turbo speed. That said, its all rather creepy and inline with what clearly seems to be a Halloween theme going on with @DroidLanding today.

Whether any more videos make the rounds before the witches hour arrives only time will tell, but either way tomorrow the Droid will be here and our own Alex Maxham will be there to bring you all the news. If you need a quick catch up on what we already know then the Motorola Droid Turbo will come loaded with a 5.2" IPS display (2560 x 1440 resolution). Inside there is 3GB RAM, 32GB internal storage and a Qualcomm Snapdragon 805 processor. The device comes powered by a 3,900mAh battery and will come running on either Android 4.4.4 (KitKat) or running on Android 5.0. Want to check out the video for yourself. Of course you do.