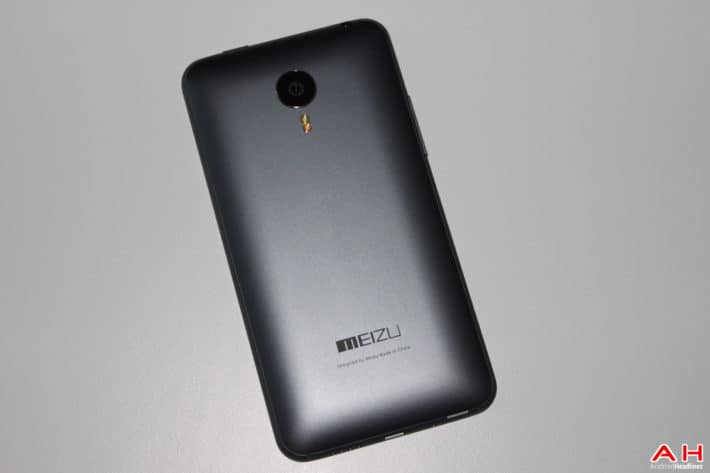 First impressions are everything, right?  That's why we like to post first impressions of a device, and while they may end up changing after using a device for a good long while, it's still a good idea to remember how people are going to see a device for the first time.  Meizu's MX4 is obviously the fourth generation device in a line of phones designed to compete with the best out there while also trying to offer the device at an affordable cost.  The MX4 keeps up with a number of different schools of thought on design out there, both in terms of hardware and software.

Let's start on the hardware, which is a rather interesting mix of styles and designs.  The device is super light, almost too light to feel like it's made of metal, but it definitely is.  The housing on the phone is aluminum, and the back is a plastic shell with what feels like an aluminum finish.  The back might be removable but the battery isn't, and underneath the back cover you're only going to find a micro SIM card slot, nothing else.  The design of the device itself feels very iPhone-ish, and is reminisce  of a number of different generations of iPhone.  The back of the phone looks like it could be any number of HTC phones out there, and the sides and bottom look straight out of an iPhone 6.

The most interesting trait of all is the dedicated capacitive home button which isn't flanked by any other buttons at all on the face.  In fact all the other functions are controlled by gesture; swiping up from the bottom bezel on any of the blank sections brings up a recents menu, and swiping up on the home button performs the standard Android back button action.  Meizu further mixes this up by occasionally bringing a contextual bar of soft buttons on the bottom of the screen, usually with back on the far left and then anything else the app requests on the rest of the bar.  This only works for apps built with the bar, which means only stock Meizu Flyme apps.

The screen on the phone is second to none when it comes to IPS LCD displays.  It's not only super bright and what seems to be very color accurate, it also has extraordinary black levels not normally found on an LCD on a phone.  When putting it up to other IPS LCD phones as well as Super AMOLED devices, the black levels on the Meizu MX4's screen were almost as good as on the Super AMOLED display, leading us to wonder exactly to what lengths Meizu went to get a display with these sorts of viewing angles and black levels.  There's an unfortunate bit of ghosting on the display though, but it's not so bad that it ruins the rest of the experience.

Performance is mostly good, although it feels like MediaTek's processors aren't as well optimized for Android as Qualcomm's.  For instance running a live wallpaper often gave me significant framerate drops no matter what I did, where as running the same wallpaper on a Snapdragon 801 at the same resolution doesn't bring these issues up.  This doesn't happen on games which might actually run better on this chip than on the Snapdragon 801, which says quite a bit.  The MX4 uses MediaTek's latest octo-core chipset, which features not only performance and battery improvements over the previous generation, but also things like off-screen gestures and things like double-tap to wake the device from sleep.

The camera is always my favorite part, but I'll save the details for the sample gallery post.  Overall it's phenomenal, and should be given that it's the same large 1/2.3" 20.7 megapixel Sony sensor found in the Xperia Z series as well as the upcoming Droid Turbo on Verizon.  Meizu has an amazing phone in the MX4, and so far I'm loving nearly everything they've put into it.  Stay tuned for more in-depth posts on the MX4 as well as our full review in the coming week or so.

Meizu's MX4 is a pretty incredible phone at an incredible price, and we've got the hookup if you want to grab one.  Our friends over at 1949deal.com are shipping this one worldwide and offering Androidheadlines.com readers 10% off the regular price.  This is where we get our devices and we highly recommend them to you!  If you're looking to get the 16GB Meizu MX4 you can grab it here in Black, White or Gold.  The 32GB version costs just a little bit more and will give you double the space and is also available in Black, White and Gold.