Skip to content
Trusted By Millions
Independent, Expert Android News You Can Trust, Since 2010
Publishing More Android Than Anyone Else
7
Today
42
This Week
494
This Month
5636
This Year
115640
All Time Android 5.0 Lollipop alongside the Nexus 6, Nexus 9, and Nexus Player was just announced this morning officially from Google, and while we still aren’t going to get the updates to Android 5.0 Lollipop for more than likely a few more weeks, there is still much to be excited about with the coming of this version of the OS. Android 5.0 is more about unification with Android then ever before, and you’ll see that plenty with the way Google has been painstakingly updating elements of design that have a seamless look and feel across Android smartphones and tablets, as well as Android Wear smartwatches. As Google puts it, Android 5.0 contains the “smarts of Android on screens big and small,” and they’re right.

In the spirit of unification, Android 5.0 Lollipop makes it easier to enjoy the content and stuff you use often across all of your devices with things like photos, videos, music, app, and recent searches too. The unification isn’t just about the design and the way Android 5.0 looks across multiple screen sizes though, it also encompasses being able to pick up where you left off with content from one screen to another. As you may have seen already with apps like Floatify and the features of the Android L preview, Android 5.0 Lollipop will allow you to customize which notifications are important and a priority, as well as set certain app notifications to a blacklist so only specific ones show up. When you need to respond to something that’s important you can do so quickly from the lockscreen itself. 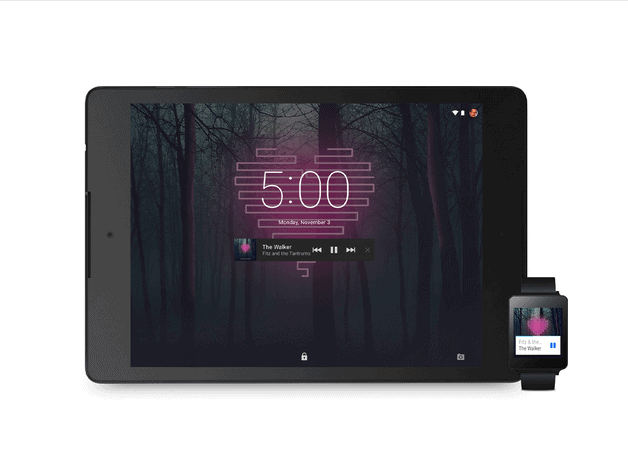 Android 5.0 also includes a battery saver feature which boasts to give users an additional 90 minutes of battery life on their device before they need to plug it in for a charge, something that while not quite as powerful as the power saver feature on the Galaxy S5 or HTC One M8, will still come in handy. Of course 5.0 Lollipop includes the beautiful stuff too, like the fluid design and motion of the interaction from the device when it responds to your touch. Some of this has already been present in the Android L preview but with 5.0 Lollipop now official and the new Nexus devices on the way, we’ll begin to see the fluid interaction and design of Lollipop in all its glory soon. One of the more interesting features, at least for me personally, is the way that Lollipop allows to keep from being interrupted when playing games or watching videos should a phone call come in. The user has the choice to continue with what they’re doing or take a break and answer the call.

Android 5.0 devices also come with a built-in encryption for enhanced security if the device is lost or stolen, which will only add to the feeling of safety and privacy alongside the features and capabilities for device sharing with separate profiles and guest users. For ease of use and convenience, quick settings returns in Android 5.0 Lollipop with a refreshed look, and a new way to access it with just two swipes down from the top of the screen. There’s also some newly added tools like the flashlight, hotspot, screen rotation and cast screen buttons, now native to stock android. Google states that Android 5.0 Lollipop also has improved Bluetooth low energy capabilities as well as better network handoffs, which will certainly benefit those of us that use Hangouts now for VoIP calls when we go to and from the house and from WiFi to cellular connections.

Google has also enhanced the accessibility features in Android 5.0, making it easier than ever to use with enhanced low vision and color blind capabilities on a device. There’s also an addition of 15 new languages for the device languages support with Basque, Bengali, Burmese, Chinese (Hong Kong), Galician, Icelandic, Kannada, Kyrgyz, Macedonian, Malayalam, Marathi, Nepali, Sinhala, Tamil, Telugu , totaling at over 68 languages now. There’s also other improvements like lower latency audio input, which in the end, should help to provide the best real-time experience for music and communication apps. There’s lots to love about Lollipop, are you all excited to get a taste of the new software?