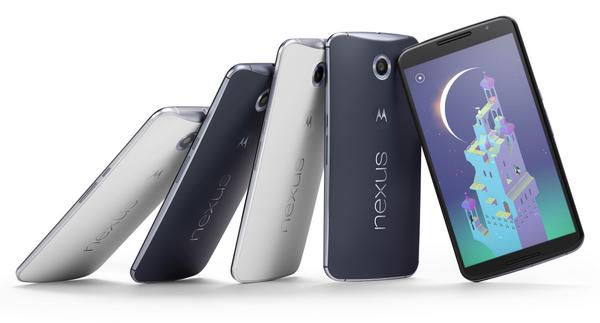 The Google Nexus 6 is now officially official. As Google has just dropped a ton of press releases on us about Android Lollipop, Nexus 6, Nexus 9 and the Android TV player. However, they are not available today. The Nexus 6 will start pre-orders on October 29th. The Nexus 6 looks a lot like the Moto X (2014) which we reviewed last month. But it's much larger. It's got a 6-inch Quad HD display, and a much beefier battery. It's packing a 3200MAh battery inside. It basically looks like it's a bigger DROID Turbo which Motorola and Verizon will be showing off on October 28th in New York City.

So what about the price? Well it looks like it will indeed be a pricey Nexus 6. Prices are set at $649 here in the US. Which is a big jump over the $450 price tag of the 32GB Nexus 5 last year. But then again, this Nexus does have a lot of the high-end specs that even the Moto X didn't have, surprisingly.

Additionally, the Nexus 6 will be heading to all five major carriers here in the US. That's AT&T, T-Mobile, Sprint, Verizon and US Cellular. Yes Verizon got another Nexus. Pretty surprising after the Galaxy Nexus right? Pre-orders start in about two weeks and we'll definitely be getting one or two in to check out and review, obviously. Prices on contract aren't official just yet, but we are hearing $49 on contract – at least that's what leaked out on AT&T's site last night.