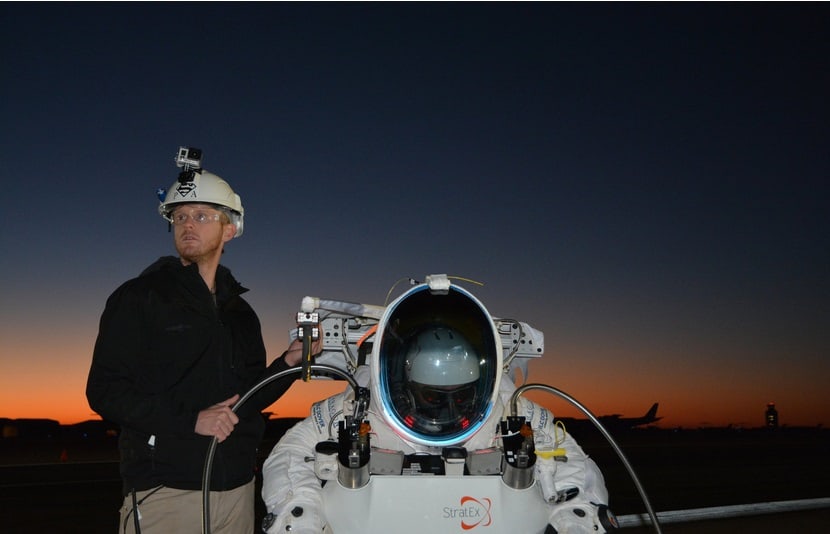 Felix Baumgartner has nothing on Google. Baumgartner jumped pulled a Red Bull stunt about 2 years ago, jumping from a then-record height of 128,000 and recording the whole thing. It was gut-wrenching to watch him sit on the edge of the capsule that took him into the stratosphere. When he jumped, my stomach hit the floor. That’s nothing, though, because Google executive Alan Eustace just jumped from an even higher 135,908 feet. That’s well in the stratosphere, breaking Baumgartner’s record by more than 7,000 feet.

Eustace reached the upper stratosphere at a height of 135,908 feet and his official fall clocked in at just under that, 135,908 feet. He was in freefall for 15 minutes. He reached a peak speed of 822mph. That’s insane! During the fall, Eustace broke the sound barrier and created his very own sonic boom. He said the ride up was breathtaking. He didn’t feel or hear the sonic boom created when he broke the speed of sound. “It was amazing,” he said. “It was beautiful. You could see the darkness of space and you could see the layers of atmosphere, which I had never seen before. It was a wild, wild ride. I hugged on to the equipment module and tucked my legs and I held my heading.”

Eustace is a senior VP of search at Google. He’s one of the engineers that make doing a Google search possible. Unlike Felix Baumgartner, he’s not a daredevil and he doesn’t make his living by doing insane things like jumping out of a pod and falling through the stratosphere. Eustace took off in a balloon full of helium, cut himself loose when he reached his planned height, and plummeted to the earth. At 57 years old, he now holds the world record for highest jump.

The event was recorded by several GoPro cameras that Eustace had attached to his person, but the event wasn’t the giant spectacle that Red Bull and Baumgartner put on in October 2012. There’s a video that you can watch below, too.